Part 2 of das Finale continues with Ooarai Girls High School’s tankery battle with the French-inspired BC Freedom. Having survived being ambushed on a bridge in Part 1, Ooarai end up taking the battle to them which results in a fight in a hedge maze. Given that this is a six-part finale, you can probably guess that Ooarai come out on top.

Afterwards, we learn a bit more about Momo and her family: her parents run a stationery shop and we see she has multiple siblings, and coming from such a big family she is keen to get into the university of her choice in order to get a good job and help them. Following on from this, Ooarai face their second round battle, this time against the Imperial Japanese-inspired Chi-Ha-Tan team, who always end up charging into battle and refusing to retreat. However, since they last fought each other, Chi-Ha-Tan have learned from their mistakes. Their orders may still be to always include the word “charge”, but those orders are not always to “charge forward”. Sometimes they might be charge to the side, or even that most unsuspected of manoeuvres, a charge to retreat.

While the comedy was one of the main draws in the first part, in the second the action comes out more on top. Both of the battles so far have been thrilling, with unexpected twists and turns. One interesting aspect of the battles is the use of different terrains for each encounter: while the match against BC Freedom was in mostly open countryside, the fight against Chi-Ha-Tan is in a jungle.

Another aspect to bring up here is the music. Each school has their own battle theme, based on marching songs from their respective countries. Chi-Ha-Tan sing Yuki no Shingun (The Snow March), a song that the Japanese Army actually banned during WWII. BC Freedom meanwhile use the Napoleonic song Chanson de l’Oignon (Song of the Onion). Now, I know that the French don’t consider the whole onion-seller thing to be a stereotype they recognise, but you cannot deny that from English eyes, a French song about onions just seems to confirm all English prejudices about the French. Nevertheless, both are good songs, although it does get problematic when you see that the German-influenced school attended by Miho’s older sister Maho has two themes that were used in the 1930s and 40s.

One of the nice things about this second collection is that it is slightly longer than the first. It’s roughly an hour, but not that long compared to most films, and it would still have been better to have released fewer but longer films rather than lots of small ones. The collection does include more extras than the first: textless opening and closing (the theme songs are the same as the last part), Japanese promos, trailers, and a small OVA. This episode, “Taiyaki War!”, follows a conflict at the BC Freedom Academy between the posh students and the working class students over food stalls which, not surprisingly given the French influence and all the stereotyping there is in this show, leads to a strike. I know that some may be put off by all the stereotyping that appears in Girls und Panzer, but in terms of offensive it is relatively low-level, and the Japanese are mocking themselves as well so it helps to level things out.

The main problem with das Finale is that all the parts are so spread out. We don’t know when Part 3 will arrive, and Part 4 has yet to come out. Let’s hope it really is a case of good things coming to those who wait. 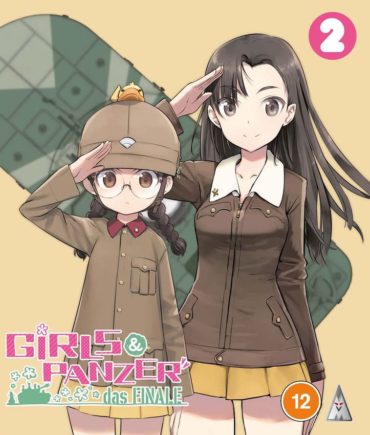