Once again, we return to reviewing the end of one battle and the start of another, as Girls und Panzer das Finale appears to be very keen on using cliffhanger endings.

The start of Part 3 sees Ooarai Girls Academy lead by Miho Nishizumi having what seems to be the upper hand against the Imperial Japanese inspired team Chi-Ha-Tan – the school whose general method of fighting is to charge in constantly without any consideration of retreating. That was until the end of Part 2, when they finally did retreat, albeit a “charge to retreat”.

The battle sees Chi-Ha-Tan deploying amphibious tanks in a battle taking place in a jungle at night, which among other things does lead to some mixed use of CGI animation. The use of live rounds including tracer bullets does light up the screen wonderfully, adding atmosphere to the battle, but when you see the characters being animated with CGI, it returns to looking disappointingly clunky. Once more, you can guess who wins the battle by virtue of the fact that this is a six-part series.

Following the conclusion of this fight, we see coverage of the other quarter-finals in the Winter Continuous Track Cup: the German-inspired Kuromorimine knock out the Russian-influenced Pravda; the tea-drinking British-influenced St. Gloriana have an easy win against the Italian-inspired Anzio; but in a shock result, the American-influenced Saunders are eliminated from the competition by the school who become Ooarai’s semi-final opponents: Jatkosota, a school inspired by Finland who specialise in guerrilla warfare. Fighting on a snow-laden battlefield, the “Finns” not surprisingly have the advantage, using tanks hidden in giant snowmen and their secret weapon, a student nicknamed the “White Witch”.

In Part 2, the action became the dominant element of das Finale, and in this latest instalment it is even more substantial. We don’t see much of the more personal side of the characters. We do witness Ooarai’s student council putting together a yearbook, and we also see the Jatkosota school ship, which seems to be celebrating Christmas. Whether it is actually Christmas is not alluded to, with no mention of Christmas being made in the anime but given all the Santa outfits and Christmas market stalls, it could be that for the Jatkosota students it’s Christmas every day. Most of the collection is devoted the actual battles, and they are exciting, especially the final moments of this part which indicate a big hurdle that Miho now has to tackle.

Again, this is a brief watch at around an hour if you count the extras. These include yet another OVA short, this one being “Daikon War!”, in which the Anglerfish team try to track down the representative of the school council’s agricultural department. While at first this appears to consist of normal countryside, the further the girls travel – on horseback – the more it is revealed that this area has a Wild West vibe, complete with girls who appear to be dressed as Native Americans, and when they finally find the department representative, Jane, she’s taken on the guise of a sheriff who is hunting a daikon-stealing outlaw. This is certainly the funniest part of the collection – mainly because of this weird shift into a western. Other extras in the collection include textless opening and closing, promos and trailers.

It will be good to see Part 4 – the only problem is that it isn’t finished yet. Given that the three previous parts were released in 2017, 2019 and 2021 respectively, it seems most likely that Japan will get Part 4 next year, but when it will be released in English is anyone’s guess. Looks like we are going to have a long wait. 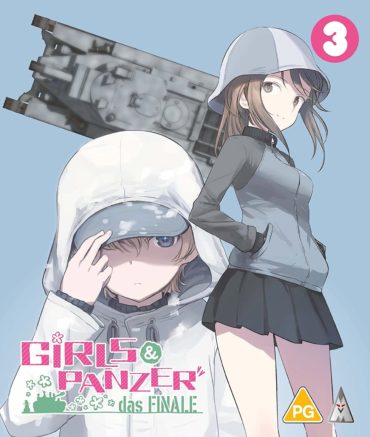