“Never. I’ve never thought that I liked making art. Not even once.” Yotasuke and Yatora

Yotasuke – after his shattering reply to Yatora’s direct question – retreats into his habitual seclusion. While Yatora (being Yatora) is feeling considerable guilt and regret at having confronted him, Yotasuke has gone to look at the rabbits in the nearby school. No one’s trying to get to know the real me. They’re just seeing me at surface level. They just want to control me with their assumptions.

Meanwhile the pressures of the art course increase with the announcement of the first-year show. For this the students must submit a proposal and then when the pieces are being exhibited, they will have to undergo an open review from the professors. In the meantime, Yotasuke is still visiting the school rabbits where a little girl (possibly with special needs) who looks after the rabbits and her teacher have been talking with him. This gives him a very different perspective on the issues that are troubling him and his smothering home life – and eventually he finds the courage to talk – properly talk – with Yatora, admitting, “It’s like… I became an adult without actually growing up.” As Yotasuke admits that he envies Yatora his ability to get on with other people so easily, Yatora finds himself suggesting they do an all-nighter in Shibuya, and is then horrified when, to his surprise, Yotasuke agrees. But Yatora, although short on funds and good guy that he is, plans a number of activities that won’t put too much strain on his wallet, including visiting an exhibition of the artwork done live on TV by young ‘star’ artist Konatsu Ono. And she just happens to be the guest lecturer who’ll be attending their first-year art show (for which he’s still done absolutely nothing). What comes of the all-nighter? Does it provoke any dramatic changes in they way the two young artists regard their work – and each other? Whatever happens, the first-year show is looming nearer and work has to be prepared to be displayed and exposed to the live critical appraisals of the academic staff – and that’s going to be tough.

In many ways, Blue Period’s tenth volume is as much about Yotasuke as Yatora – and his struggles to discover who he really is, and assert himself as an individual, apart from the stifling relationship he’s in with his (older) parents. Yatora is also an only child still living at home but his relationship with his parents seems much more relaxed; his parents don’t treat him like a schoolboy and seem to have accepted that he has a life of his own to lead.

If readers had any lingering doubts that Tsubasa Yamaguchi would lose the dramatic impetus that drove the first volumes of Blue Period as Yatora and his fellow prep-school students competed to get into university, this volume triumphantly dispels them. Slice of Life can be a tricky genre to get right but the mangaka makes these four chapters a compulsive, yet moving read. The climax of the volume, when the first years have to undergo the live appraisal by the academic staff of their final piece of art is truly nail-biting, especially as one of the appraisers is the deceptively cute and petite Nekoyashiki-san who proceeds to deliver a relentless and highly critical judgment. It’s impossible not to identify with the students on the end of her barbed tongue – and to wonder what’s driving her to be so confrontational. And if this sounds too off-putting, the all-nighter in Shibuya with Yotasuke and Yatora is a wonderfully awkward, embarrassing, life-enhancing read. And all these scenes – and especially the people – are brought to life with Yamaguchi’s quirky, original, eye-pleasing graphic style; her art, whether her inspiring use of colour (foregrounded here with bright colour pages introducing Stroke/Chapter 40, including a stunning chrome-yellow double-spread) or her distinctive and meaningful portrayals of her characters.

Ajani Oloye’s excellent translation for Kodansha Comics continues to convey the story and the conversations in a direct and readable way, backed up with translation notes at the end, and Lys Blakeslee’s lettering covers and conveys the many styles employed by the mangaka. There are, as usual, four 4-koma strips at the end, and a short bonus chapter showing Yatora and his friends from high school celebrating New Year.

Volume 11 is already available in digital (and should be available in the UK in print) – and takes a rather different turn which is foreshadowed right at the end of this volume as Yatora, desperate for cash, looks for a temporary job. 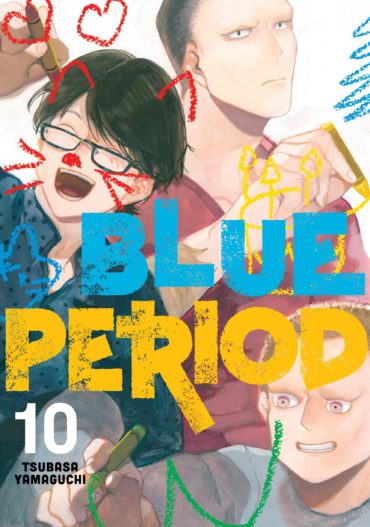 Art student Yatora is about to start the second term of his course at TUA – but he seems to be suffering from some crippling kind of block. Is this the end of his dreams to become an artist?