Preparations for the TUA summer festival are in full swing and Yatora and his group have been struggling to construct their mikoshi (portable shrine) on time for the procession in the sweltering heat of full summer. Luckily, the other art students rally round and they’re finally ready to participate in the festivities. But as the summer wears on, all is far from well with Yatora as the second term looms. Is this some kind of artist’s block? He senses that his attitude to other people’s art is changing and maturing – but he feels unable – unwilling, even – to make his own. Although, in spite of this lingering malaise, a gallery visit with Yotasuke Takahashi and Hashida (from art prep school) to see a Velasquez exhibition stirs something deep inside. In spite of himself, he’s intrigued by the old master’s consummate skill at portraying people.

It’s the next project for the second term which takes Yatora and his fellow students into pastures new as they look back into the past by learning how to paint a fresco (on damp plaster) and make mosaics, creating their own tiles from all kinds of materials, including marble and shells. The course throws Yatora and introverted boy genius Yotasuke together again and, as usual, they rub each other up the wrong way. Yatora is fascinated and infuriated at the same time by Yotasuke’s ability to – seemingly effortlessly – turn out amazing artworks. But Yotasuke, a sheltered only child, may be beginning a very belated teenage rebellion. What triggers this is a rumour that’s going around the students that ‘every year, the person that has the top academic scores will pass, no matter what.’ And as one of the group comments, “That would mean they don’t evaluate that person’s art.” But then one of the tutors/professors, young and pretty Neko Yashiki, goes up to Yotasuke, asks him if he’s reading works by authors like Gombrich and Lacan, and says pointedly to him, “You’re smart, aren’t you? You gotta use those smarts of yours.” Yotasuke is instantly on the defensive – and later on, when she innocently lets slip a half-finished comment, “You weren’t chosen for you ar – ” both Yotasuke and Yatora realize that she’s telling him he is the student who got in on the top academic scores. Yotasuke is devastated. “Fuck you,” he says to Yatora as he storms off. “Fuck all of this.”

All this leaves Yatora feeling even more conflicted. He feels bad for Yotasuke. But by the end of the volume, we see him cornering him, asking the question which has been troubling him for a long time, “Do you like to make art?”

What brings me (and I guess many other readers) back again and again to Blue Period is the way mangaka Tsubasa Yamaguchi nails so accurately the problems of studying the creative arts – and the way a throwaway comment from one of the teaching staff can paralyze a young artist (or musician or writer) rather than showing them how they can develop their ideas going forward. The difference between creative criticism and merely pointing out what’s wrong with a piece of work is of vital importance. Yatora has been inwardly paralyzed by a single remark by one of his tutors that – rather than helping him – has made him question everything he’s doing but not in a good or constructive way. And now Yotasuke has been devastated by another professor’s seemingly throwaway comment. If Yamaguchi’s characters were not so complex, we’d probably be far less invested in their struggles to discover themselves through their art – but it’s impossible not to identify with one or other of the main-focus students as they try to make sense of the way they’re being taught and work out if it has any relevance to what they want to communicate.

We don’t just get to eavesdrop on the students’ lives; Yamaguchi shows us what some of their tutors are doing, leading to what will develop over subsequent chapters into a fascinating (and sometimes chilling) look at how the tutors interact with the students.

Volume 9 is translated for Kodansha by Ajani Oloye who continues to convey the dialogue and the art-related jargon in a very readable way; the lettering is ably done again by Lys Blakeslee. Six glossy plates at the front make a great start to the book with a wonderful colour double-page spread to celebrate the culture festival inspired by a nineteenth century Kawasabe Kyosai painting, reinterpreted to show the students celebrating. The translation notes give a helpful and fascinating explanation. The four 4-koma panels at the back depict one more student and three of the teaching staff, including the troublesome Neko Yashiki and hopelessly clumsy Professor Rosei.

Volume 13 came out in Japan recently and instantly shot to no. 2 on the weekly manga sales; no mean feat when Tokyo Revengers was at no. 1! In the meantime, Kodansha are playing catch-up; volumes 10 and 11 are also available in digital print and volume 12 is due at the end of January, although here in the UK, we’ve had to wait longer for the physical volumes to make an appearance. 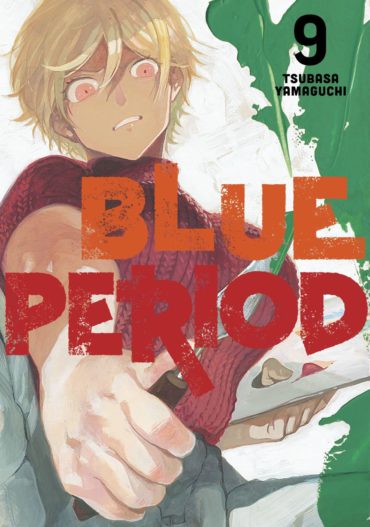 The end of first-year art show looms large for Yatora and his fellow students – and he’s struggling to decide what to paint. Has he fallen out of love with making art?