Please note that this review contains spoilers for Aria The Masterpiece Volume 1!

Aria: The Masterpiece is a manga series by Kozue Amano which tells the story of Akari Mizunashi, a young woman who is training as an apprentice gondolier (referred to as Undines) in the city of Neo-Venezia, on Planet Aqua which is covered in vast oceans.

The narrative itself takes place in the 24th century with Neo-Venezia being a city on the Planet Aqua, formerly known as Mars. Neo-Venezia is based on Venice, as seen through the architectural style, being a harbour city with narrow canals aplenty and a reliance on gondolas for travel.

This first volume follows main protagonist Akari: a Pair (an apprentice gondolier) who is working her way towards becoming a full-fledged gondolier (known as a Prima) as she settles in to her new surroundings and becomes accustomed to her new employer, the Aria Company.

It is here that we are introduced to Alicia Florence, an easy-going and supportive mentor figure for Aria, and the only other Undine currently working for the Aria Company.

We also discover that the company president is actually a rotund cat known as Aria Pokoteng, who also serves as the company’s mascot, feeding into the lore that all Undine companies on Aqua have a blue-eyed cat as their mascot.

Akari also becomes friends with a fellow trainee in Aika S. Granzchesta, a slightly abrasive yet passionate type. Despite initially forming a friendship with Akari merely to get closer to Alicia, whom she admires, the duo quickly become closer, embarking on a quest to follow Aria into the Kingdom of Cats.

This forms the first chapter in the volume that takes the fantastical nature of the story further, also offering a hint of danger as Akari and Aika find themselves seemingly lost in a labyrinth of tight waterways and desolate abandoned settlements with Akari noting how silent and still the area is. It adds a slightly creepier aura to an otherwise more tranquil storyline.

A theme that’s established in this first volume is Akari’s growth in her Undine training. A notable sequence sees Akari being tested in secret by rowing her gondola up a difficult and steep overland canal, succeeding with flying colours to the delight of Alicia and being promoted from a Pair to a Single (the next step to becoming an Undine).

A part of this journey comes when Akari meets her first passenger Akatsuki Izumo, an impatient apprentice Salamander (those who help maintain Aqua’s climate via floating buildings tethered above Neo-Venezia) who teases her from time to time with the nickname “Sideburns”.

Towards the end of the volume, we also get some insight into Aqua’s culture as Alicia takes Akari to a three-day night-light Bell fair, centred around the custom of hanging special wind chimes that shine in the dark but only last for a month. These are a specialty of Aqua due to a special stone and are a symbol of Summer – one that lasts much longer on Aqua because of a twice-rotation around the sun resulting in a 24-month year.

The custom of gathering together on the gondolas to bid farewell to these lights results in some striking imagery, as does a special fireworks display that closes the volume on a positive note as Akari declares that her time on Aqua is just beginning.

Through the art for Aria, mangaka Kozue Amano expertly crafts a world inspired no doubt by Venice and its canals and waterways, whilst offering hints of technology that give the world its subtle sci-fi elements. The characters are also given distinct designs and expressions which provide a charm to the proceedings.

Translation for Aria The Masterpiece was carried out by Alethea & Athena Nibley who do a solid job of preserving both the main character’s personality and the various explanations of the story and its lore.

It is also worth noting that Aria The Masterpiece was recently reprinted, likely for the final time by Tokyopop, via a commission by Rightstuf based on demand by those who were either missing volumes or wanted to have the entire story in their library – this is how the volume was obtained for review.

Overall, Aria The Masterpiece Volume 1 is a great introduction to the story, establishing Akari as a likeable protagonist and the world of Aqua as a fascinating setting full of charming characters and mystery, melding together fantasy and sci-fi in an inventive fashion. It certainly made me want to read more! 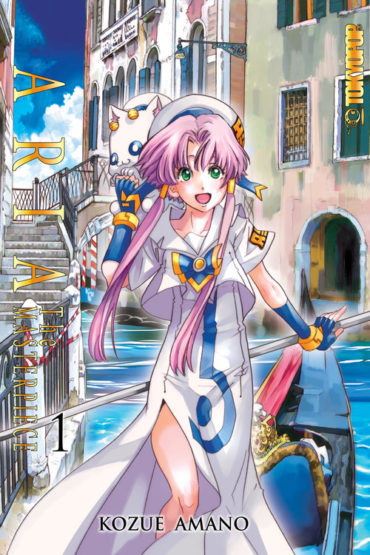