Please note that this review contains spoilers for Aria The Masterpiece Volume 5!

Volume 5 continues the story of main protagonist Akari, an apprentice gondolier who is working her way towards becoming a full-fledged Prima. Last volume, we saw Akari continue to build relations with the citizens of Neo-Venezia, we were introduced to Athena, one the Three Water Fairies with a beautiful singing voice, clumsy, yet with an almost carefree nature. We also saw Orange Planet gain a new mascot in Maa-Kun, a Panda-like cat with an affinity for President Aria.

In the opening chapter Aika takes on a different appearance, having burned her hair during a barbecue mishap, a blow, as she aimed to keep growing her hair as part of her goal to become an Undine like her idol Alicia.

Aika’s mentor Akira, however, gives her a reality check, telling her that Aika must be herself and not aim to merely emulate another person – it’s another great example of how their dynamic as mentor and pupil works so well. The result is not just a new hairstyle for Aika which she keeps throughout the volume but also a newfound confidence in her own abilities, as opposed to trying to be someone else.

She even gets the courage to show off her new hairstyle to Al Pitt, a Gnome (a term referring to those who work underground regulating Aqua’s gravity so that it is the same as Manhome’s) whom she has a crush on. On the subject of crushes, the stubborn Salamander Akatsuki gets a little extra chapter this volume, showcasing a flashback featuring his active imagination and drive to protect Aqua from an early age.

The mentor and pupil bond between Akari and Alicia also gets a cute chapter as a power cut and fear of the dark lead to a candlelit bonding session between the two, discussing the past, present and future.

The theme continues with a chapter highlighting Athena and Alice’s relationship, in which Akari and Aika have a sleepover at Orange Planet. Here we’re shown both the carefree and mature side of Athena when Alice rejects a party invitation with other girls in the company. They, and in turn the reader, muse on how difficult it is for Alice to fit in, being younger and skilled but misinterpreting looks of admiration for ill-intent. It highlights, as Aika points out, that Alice is still essentially a teenager trying to find their way in life.

With some reassurance from her mentor though, Alice finds the confidence to attend and appreciates just how her new friendships have pushed her forward. It’s these friendships that really form the heart and soul of Aria as a story, effectively conveying the importance of said bonds and how they convey growth as a person and also a Pair/Single.

Another segment focuses on this relationship as well, with Athena feigning amnesia to try and figure out how Alice really feels about her, fearing she might be sick of her mentor, when the reality is quite the opposite. This is a nice little story as it highlights that even the most gifted of the cast still feel anxious sometimes and are still young and finding their place in the world.

A particularly memorable and fun chapter from the volume sees Aika and Alice tailing Akari while she works, having picked up on just how naturally the citizens of Neo-Venezia gravitate towards her during her day-to-day life.

As is par for the course with this manga, we get another exploration of the fantastical side of Neo-Venezia, when Akari takes a passenger, clad in black mourning attire, to San Michele – an island that also acts as a cemetery and that’s tied to numerous ghost stories. She, of course, ends up being dragged onto the island by her passenger and almost gets trapped, only to be awoken by President Aria, thus forming another ghost story to tell.

The final chapter in this volume focuses on a bonfire night, acting as the final act of summer for Akari and her friends. It’s a sweet little closer, partaking in familiar traditions turned tropes like wearing yukatas, attending stalls and eating a lot of food – all before bidding farewell to summer and embracing the autumn. We even get a nice reappearance from Woody, the Sylph we first met in Volume 3 who is just as humorous here as he was then.

Translation for Aria The Masterpiece was once again carried out by Katie Kimura who did a solid job the previous volume too, preserving both the characters’ personalities and the various explanations of the story and its lore.

It is also again worth noting that Aria The Masterpiece was recently reprinted likely for the final time via a commission by Rightstuf based on demand by those who were either missing volumes or wanted to have the entire story in their library – this is how the volume was obtained for review.

Overall, Aria The Masterpiece Volume 5, though relying on familiar set-ups for its storylines, continues to be a pleasing read thanks to the strength of its characters and setting, and also in how it grows and develops these aspects in interesting ways. 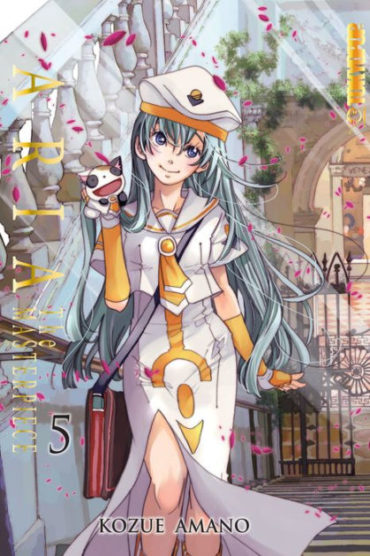