Please note that this review contains spoilers for Aria The Masterpiece Volume 2!

This second volume continues the story of main protagonist Akari, an apprentice gondolier who is working her way towards becoming a full-fledged Prima. In the first volume, Akari began integrating herself with her employer the Aria Company, met her mentor figure Alicia Florence and rotund cat company president Aria Pokoteng, and also passed a secret test, leading to being promoted from a pair to a single, showcasing her growth as an Undine.

The volume begins with autumn falling on Neo-Venezia and Akari assisting an elderly gentleman from Manhome who is looking for his lost daughter and her husband. Akari, having become more confident, punts him around both to search and sightsee – breaking down his stubborn exterior and providing an experience to remember, all whilst the autumn leaves fall, providing quite the atmosphere.

We also get to catch up with supporting characters in Aika, a member of the Hime company, who became Akari’s first and best friend in Neo-Venezia. The duo are tasked with cleaning the gondolas and, despite trying to put on a serious front for her idol Alicia, Aika soon gives in to the fun side of getting the job done.

Another returning face is Akatsuki, who was previously introduced as an impatient apprentice Salamander (those who help maintain Aqua’s climate via floating buildings tethered above Neo-Venezia) who teases Akari with the nickname “Sideburns” and was her very first customer as a pair.

The two end up at the same location where they’re meeting separate friends, only for Akatsuki’s to be late. He asks Akari to give him a tour of the local area and ends up being shown various statues and monuments, while revealing a less serious and slightly goofy side, possibly hinting at a crush on Akari (who remains humorously oblivious). This adds a nice bit of depth to his character and shows how Akari’s positive aura rubs off on others.

Volume 2 also introduces a new character in Albert “Al” Pitt, a Gnome (a term referring to those who work underground regulating Aqua’s gravity so that it is the same as Manhome’s) who, despite looking young due to the stronger gravity underground, is actually several years older than Akari and Aika.

A highlight from Volume 2 features another fantastical happening within the setting of Neo-Venezia as a visit to a shrine island to pay tribute to its fox deity results in Akari becoming separated and doing what she was warned not to: following the fox spirit. The chapter ends with Akari returning to the real world and the happenings tie into the ending nicely, making for an effective self-contained storyline.

The final two chapters are also quite memorable and cap off the volume nicely, owing to the featuring of a New Year’s Eve celebration, which is introduced to both the reader and Akari. Not only does it bring characters, both supporting and main, together, but it also ties back into a chapter from Volume 1 where Akari and Aika found themselves in the Kingdom of Cats – further suggesting that Akari has a higher spiritual connection than she realises.

Translation for Aria The Masterpiece for Tokyopop has once again been carried out by Alethea & Athena Nibley who do a solid job of preserving both the main character’s personality and the various explanations of the story and its lore.

It is also again worth noting that Aria The Masterpiece was recently reprinted (possibly for the final time) via a commission by Rightstuf based on demand by those who were either missing volumes or wanted to have the entire story in their library – this is how the volume was obtained for review.

Overall, Aria The Masterpiece Volume 2 is a wonderful continuation of Akari’s story as she continues to develop her skills as an Undine as she forms new friendships and grows further accustomed to the world of Neo-Venezia and its fantastical aspects. 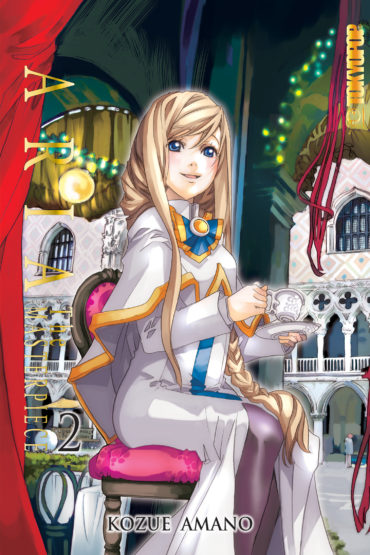