Please note that this review contains spoilers for Aria The Masterpiece Volume 4!

Aria The Masterpiece is a manga series by Kozue Amano which tells the story of Akari Mizunashi, a young woman who is training as an apprentice gondolier (or Undine) in the city of Neo-Venezia, which is covered in vast oceans.

This fourth volume continues the story of main protagonist Akari, an apprentice gondolier who is working her way towards becoming a full-fledged Prima. In the third volume, Akari built a new friendship with Alice, a young but gifted pair for Orange Planet, the largest water-guide company. She also further built her friendship with the stubborn Salamander Akatsuki and explored the joys and customs of springtime on Neo-Venezia.

We open with Akari experiencing her second autumn on Neo-Venezia as she uses her Gondolier skills and her strengthened familiarity with the town to accompany a mailman on his round. She even receives her first letter since arriving when the mailman thanks her – it’s a sweet little chapter to open the volume.

Akari also meets Athena, another of the Three Water Fairies, who has a beautiful singing voice and clumsy and almost carefree nature, and happens to be Alice’s roommate at Orange Company.

Athena is also shown to be good friends with Alicia and Akira, displaying a similar dynamic to Akari, Alice and Aika, with a dose of competitiveness to boot.

We also get to see just how the dynamic plays out between Athena and Alice, and how Athena’s more caring side assists Alice with growing as a person, spurred on with Akari’s budding (and endearingly persistent) friendship.

One such event is when Akari, Aika and Alice gather to witness a meteor shower, inviting the short but senior Al Pitt along to find the best viewing spot, all whilst Aika suppresses her crush on the Gnome (a term referring to those who work underground regulating Aqua’s gravity so that it is the same as Manhome’s).

Another is when Akira, Aika’s mentor, decides to train the trio by testing their tour guide skills through her own low tolerance threshold approach to critiquing their performance. Despite her strictness, though, she rewards them for trying to improve themselves, displaying a kinder side to her nature, also positively assisting Aika’s growth as a Single.

Shorter stories within the volume continue to showcase Akari’s ability to hit it off with her customers, whether it be a kindly man who turns out to be the manager of a popular caffe, or an initially aloof glass-blowing apprentice. Both scenarios result in some wonderful scenery and Akari making more fans as a Single.

Akari and Alicias’ bond as mentor and pupil also gets some nice moments this volume in a short but sweet snow-filled chapter, whilst we also witness Alice encountering a small kitten resembling a panda dubbed Maa-Kun, who becomes the new President mascot for Orange Planet.

The final chapter deals with what I assume is a reference to the classic story of The Galactic Railroad, as Akari is seemingly whisked away on it during a dream, waking up with the mark still on her forehead from the experience. This ends the volume on a more fantastical note.

Translation for Aria The Masterpiece was carried out by Katie Kimura who does a solid job of preserving both the character’s personality and the various explanations of the story and its lore, similarly to the way previous volumes were handled by other translators.

It is also again worth noting that Aria The Masterpiece was recently reprinted possibly for the final time via a commission by Rightstuf based on demand by those who were either missing volumes or wanted to have the entire story in their library – this is how the volume was obtained for review.

Overall, Aria The Masterpiece Volume 4 focuses more on the bonds between characters, especially how mentors influence their pupils, and also continues to grow Akari’s bond with the citizens of Neo-Venezia, whilst providing more striking imagery and fantastical happenings. 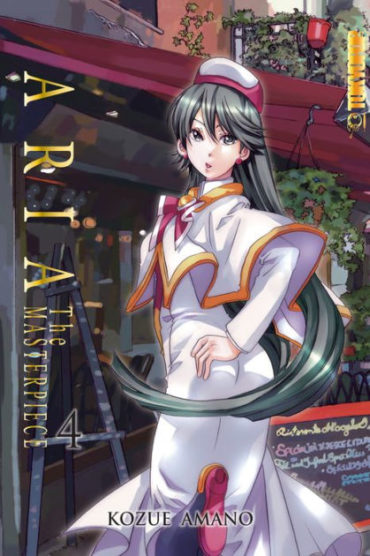 Dragon Ball Super’s manga version arrives in the UK with, appropriately, Volume 1! It covers the first three arcs of the anime, though the first two are extremely brief (to say the least in Resurrection F’s case!), all with Toriyama’s trademark art style perfectly presented by his personally selected understudy Toyotarou. Let’s take a closer look at both the story and how it does and doesn’t differ from the anime…