The ocean. Dark blue. A muted indigo. The sky. A light turquoise. I’m OK. I can still see the colors of my world.

Aspiring artist Sora Itoda is sixteen and in high school. He still hangs out with his childhood friend Nao, although he’s unwilling to call her by her first name at school these days because that leads their classmates to suspect that they’re going out together. Even though they’re good friends (and members of the art club) Sora is harbouring a secret crush on another boy in his year: the rugged jock, Kenta Yoshioka. And Sora’s loneliness in knowing that he’s gay but not daring to admit it to anyone, even Nao, is affecting all aspects of his life.

A chance dreamlike encounter with an older bearded man down by the shore leads to an unexpected friendship. Mr. Amamiya is running a little café in a ramshackle old building nearby. When Mr. Amamiya tells Sora that he is gay, Sora knows he has found an ally at last in whom he can confide. The older man has no designs on the teenager but he has a lifetime’s experience to share – and this leads Sora to be able to come out, first to his new friend and then to Nao. This also leads Mr. Amamiya to invite Sora (and Nao) to paint a mural in his café, a project that fills the young man with excitement.

Meanwhile, Sora’s mother has noticed how much time her son and Nao are spending together and jumps to the wrong conclusion: they must be dating! Matters are not much better at school, either, especially when one of Nao’s friends confesses to Sora that she’d like to go out with him and he has no idea how to handle the situation. But it’s the appearance of a smartly dressed older woman at the café that leads to some surprising and unexpected revelations and the realization for both Nao and Sora that adult life and relationships can be far from straightforward. Can they trust Mr. Amamiya?

Our Colors feels much more personal than My Brother’s Husband (though no less touching) as Gengoroh Tagame admits in his brief Afterword: ‘1979. I didn’t have any lovers, much less gay friends. No adults around me to whom I could come out… This is for that 15-yr-old 42 years ago.’ It’s even possible to interpret this story of a young artist struggling to come to terms with his sexual identity and his artistic gifts as being a dialogue between his younger and his older self, with Mr. Amamiya as the personification of the mangaka’s older self. And there are some genuinely moving moments, especially one scene where Sora comes out to Nao and is suddenly overwhelmed by his pent-up feelings, yet he cannot reveal them to her, rushing instead to the cloakroom where he bursts into tears.

Equally powerful is the theme of Sora’s love of colour that runs like an idée fixe throughout the narrative, with his evocative choices of colour words helping us to visualise what he’s seeing around him, even though this is a black-and-white graphic novel. (Synaesthesia is mentioned in the blurb but not in the text, as far as I can tell; colour is vitally important to aspiring artist Sora but he isn’t experiencing it through another one of his senses, such as taste or hearing as such.)

This handsome hardback edition (with embossed figures on the cover beneath the glossy dust jacket) includes all three volumes of the original series and makes a worthy addition to the Pantheon Graphic Library (Penguin Random House), alongside titles like Marjane Satrapi’s Persepolis and Art Spiegelman’s Maus. This would make a great library copy – but, having first read this in Akata’s three-volume paperback release in French, I can’t help feeling that it would be much easier for the target audience to access as a small portable paperback or a digital version than this weighty (though beautifully produced) tome. The translation by Anne Ishii makes the dialogue flow in a natural way that suits the different characters well; Japanese honorifics are not used. I can’t help wishing that some translation notes could have been included to explain things such as the origins of the book title ‘A Fine and Private Place’* that plays a small but significant role, what ‘koshien’ means, what sneezing means and more besides. Experienced manga readers will know the last two but they might mystify readers less familiar with slice-of-life Japanese fiction.

It’s fascinating to see the mangaka’s early sketches at the end of the book; I think I prefer the earlier softer pencil versions to his very clearly defined inked finished work, but that’s a personal preference. I also find it hard to believe that rugged Yoshioka, the object of Sora’s affections, is also a teenager; he looks much, much older and at first, I took him to be a member of staff at the school, not a classmate. Nevertheless, this is the work of a highly experienced mangaka with a graphic style that’s been refined and honed since the 90s – and it shows in the way he tells the story, sometimes taking us into Sora’s troubled thoughts in a vivid, visually effective way. The most potent recurring image is the eyeless, expressionless mask that Sora imagines covering his face when he has to switch off his feelings and listen – without reacting – to what people are telling him, such as when his mother awkwardly attempts to encourage him to practise safe sex, misreading the situation between him and Nao.

It’s really heartening to be able to welcome the relatively recent appearance of manga like Our Colors by openly gay mangaka such as Gengoroh Tagame and Okura (I Think Our Son is Gay) that reflect on their own experiences of coming out in the hope that their work will spread greater understanding and, above all, offer reassurance and understanding to young people wondering about their own sexuality.

*I assume this refers to Peter S. Beagle’s 1960 fantasy novel, which takes its title from the poem by Andrew Marvell ‘To His Coy Mistress’:

‘The grave’s a fine and private place
But none, I think, do there embrace.’ 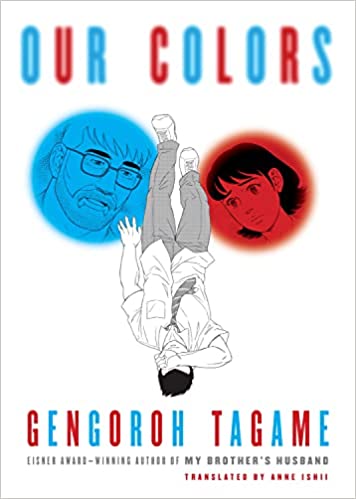