Readers may remember that Higehiro: After Being Rejected, I Shaved and Took in a High School Runaway Volume 1 was previously released by Kadokawa in English. Their release was met with a cold reception thanks to a problematic level of quality, but now the series has been rereleased by Yen Press who promised at the time of licensing to give it a new editing pass. Has that rectified the issues? Let’s find out.

Our story follows 26-year-old Yoshida who has just been rejected by his superior whom he’s had a crush on for the last five years. After drowning his sorrows with friend Hashimoto, Yoshida is drunkenly making his way home when he happens upon a high school girl called Sayu sitting under a lamppost. Yoshida asks what she’s doing there and she tells him she has nowhere to go and will sleep with him in exchange for being able to stay over.

Yoshida is shocked that a girl as young as Sayu is out on her own so late at night and saying ridiculous things. Rather than leaving her to be taken advantage of by someone else, Yoshida invites her back to his place. He has absolutely no intentions of doing anything untoward with her and promptly passes out the moment they get home but not before telling Sayu that in exchange for her staying, he’d like some home-made miso soup.

The next morning Yoshida remembers little of the night before and is surprised to find Sayu in his apartment, especially when she presents him with miso soup. But as the morning goes by, the events of the night before slowly come back to him. Yoshida finally asks Sayu for her story, where she reveals she’s a runaway from Hokkaido who made her way to Tokyo six months ago and has been sleeping with men in exchange for a place to stay.

Yoshida knows he could find himself in all kinds of trouble if anyone knew he’d taken in a high school student, but he wouldn’t be able to live with himself if he let Sayu go back to being on the street and being taken advantage of. So, he tells her she can continue staying with him until she’s on her feet, asking for nothing in return but for her to take care of the housework. Thus begins this out-of-the-ordinary living arrangement.

At first glance, it would be easy to write off Higehiro as being a creepy age-gap romantic drama, but author Shimesaba is determined to nip those concerns in the bud early on. Yoshida is not at all shy about telling Sayu (and us readers) that she’s not at all his type and he doesn’t find the idea of sleeping with an underage girl attractive. This quickly puts to rest any concerns that he’s going to be getting into any kind of relationship with her, at least for a good while.

Sayu can’t understand why Yoshida would be so kind as to let her stay when he’s putting himself at risk should they be discovered and getting nothing of value in return. She’s spent so long trading her body for lodging that she finds herself anxiously waiting for Yoshida to change his mind and in some ways hoping he will because then she’d better understand where they stand with each other. But despite her advances on him, Yoshida always refutes her and warns her that should she keep trying to seduce him he will kick her out.

What Shimesaba has actually written here is a compelling drama. Sayu is a vulnerable teenager, whose been through some awful experiences and the author doesn’t shy away from exploring that. By the end of Volume 1, we still don’t know what led to her running away, but that’s fine because Yoshida pushing for information wouldn’t be the right way to handle Sayu. Instead, he gently guides her, hoping that with a safe space to relax in, she’ll eventually be able to handle re-entering the world and getting a job or going home or whatever else she may want to do.

Of course, this secret would be too much for Yoshida to handle on his own and he quickly comes clean to Hashimoto who supports and guides him in dealing with Sayu. The ensemble cast of Higehiro is one of the series’ strong points (which we’ll see more of going forward) as not only do we have Yoshida, Sayu and Hashimoto but also Airi Goto (Yoshida’s crush) and Yuzuha Mishima (Yoshida’s junior at work). They all have their own individual storylines, which often offer a good reprieve from the emotional weight of Sayu’s problems and prove interesting in their own right.

The series started life as a web novel, which means this release is made up of relatively short chapters. I think this works to Higehiro’s benefit since it means readers can dip in and out easily and the breaks give you a moment to disengage and process what’s just happened. Nevertheless, this structure does take away from it a little bit since this book doesn’t work as a standalone novel since the ending is not particularly conclusive in any way, nor the end of an arc per se. Readers who regularly enjoy web novels turned light novels will be fine with this, but it’s unusual that we get series in this genre with those origins, so the fanbase may be a little less familiar with it.

As previously mentioned, this release of Higehiro Volume 1 comes to the West thanks to Yen Press. The translation is credited to MediBang, confirming that it is the Kadokawa script but editing has been done by Yen Press’ Jordan Blanco and Emma McClain. Compared to that first release, the Yen Press edition is greatly improved, having fixed all the awkward sentences and incorrect use of tenses.

There are still one or two lines that stand out as being a bit awkward, but it’s hard to complain when that’s one or two in the entire book compared to the previous release which was a fraction of the book and difficult to read all the way through. I certainly have no concerns recommending this to potential readers now, whereas before I’d have told you to stay well away. I have seen complaints about the fact this wasn’t a whole new translation, but frankly, MediBang’s release wasn’t inaccurate, it was just poor English which an editing pass has fixed.

The series is complete in Japan at five volumes and in English Kadokawa is currently releasing individual “parts” of Volume 4, while Yen Press have a full release for Volume 2 scheduled for a print and digital release in November. If manga is more your thing, then One Peace Books has been releasing the adaptation in English since October last year and you can check out what I thought of Volume 1 here.

Overall, Higehiro: After Being Rejected, I Shaved and Took in a High School Runaway may have had a difficult start in the English market due to its prior release but readers will be pleased to know Yen Press has put out a much-improved version. If you’re looking for a new drama to read with a fairly unique premise, then this is the series for you. 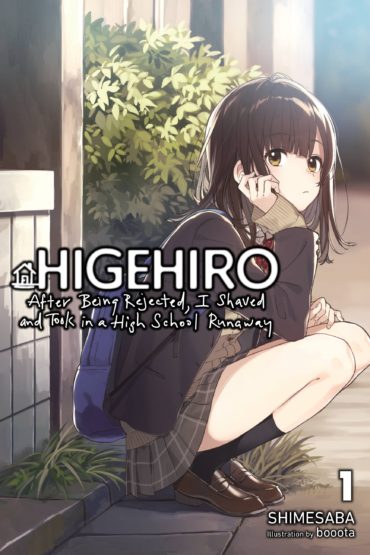 Title
Higehiro: After Being Rejected, I Shaved and Took in a High School Runaway Volume 1