Despite being relatively unknown in English-speaking territories, manga artist Keiichi Koike has earned himself a solid reputation in places like mainland Europe and his native Japan for his unique work that plunges you into the deep end of 1960s psychedelia. In this compilation of psychedelic science fiction one-shots written between 1984 and 2001, we English readers finally get to experience both his sheer talent and drug-fuelled weirdness.

There are eleven unique stories in this book, each offering something completely different in terms of subject, tone, and message. On one hand you’ve got the likes of the hard-boiled spy escapade Knockin’ on Heaven’s Door, while on the other you’ve got stories like the post-nuclear apocalypse adventure 3000 Leagues in Search of Mother, or Looper, where a young boy finds himself being bullied for bringing his pet tortoise to school. While these might not sound particularly strange at first, each story has a range of twists and turns that either completely rip your understanding of the story out from underneath you or try to confuse you as you attempt to figure out what is going on. And even if you do think you’ve got something figured out, the resolutions to many of the stories are far more mundane than you’d expect them to be, so there’s plenty of surprises in store.

While most of the stories on offer here are well-written, you do get the occasional one that is completely nonsensical, where I really struggled to understand what was going on. These tend to be the shorter pieces, sometimes only a few pages long, that feel like they come from a half-baked idea that needed more time to set out what they were trying to do.

Thematically, it’s not going to be for everyone either. A lot of the ideas here are very abstract and trippy, dealing with life, death and often the rawness of human emotion and desire, and ultimately what it means to be human. If you’re in any way interested in philosophy, then I think you might find it quite fascinating, but I wouldn’t blame anyone for this going over the tops of their heads. It must also be stressed that this is very much for mature audiences, not that it contains much blood and gore, but it does show explicit use of illegal drugs, while there are some scenes that some people might find distressing, such as depictions of mass suicide and the aftermath of a plane crash.

Visually this is a fantastic piece of work with intricate and often mesmerising artwork that is rich in detail. Koike uses a very mature art style for most of the book, often evoking more the image of Western comics than the typical manga style of your cute, wide-eyed high school girls and wild-haired shonen action heroes. It totally makes sense then that one of the stories, Landed, was a piece published in Marvel’s Epic Illustrated anthology, as his style is incredibly suited to the western market. He’s not afraid to jump track at times either, with pieces like Kenbo’s Diary and Stereo Scope going for more comedic styles in both artwork and story.

What impressed me most, however, is how he can effectively tell a story using only images, with a few of the stories here having little or no dialogue, being effective in pieces like The Sponge Generation and Horizon, as it does make you ponder more on the meaning of the story being told and the experiences of the characters.

Heaven’s Door: Extra Works is published by Last Gasp, who aren’t a big name in the English manga publishing world but have released series like Barefoot Gen. The treatment they’ve given this book is excellent, with a large-size paperback that has a premium feel overall and thick, good quality pages. The book has been translated by Ajani Oloye and reads well with no issues to note.

Overall, Heaven’s Door: Extra Works impresses with a set of fascinating stories that dig into human nature and the meaning of life and death, paired with detailed and mature artwork that both shows off Koike’s talent and sets the work apart from the more typical manga releases we see in the West. However, it’s execution and subject matter might be too trippy and confusing for a lot of readers, leaving only a very small niche being able to truly appreciate it. 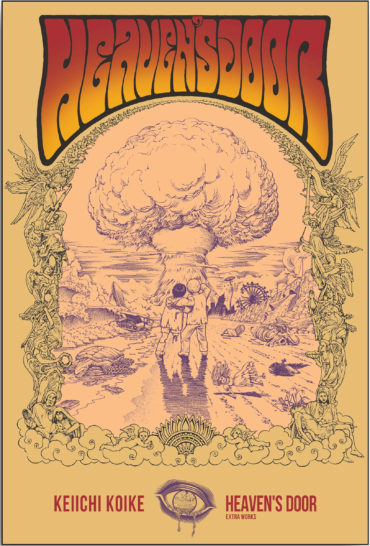