London, UK, 29 September 2022 – It’s time to get your hands on the treasure you’ve all been waiting for! Anime Limited and Toei Animation are excited to announce that tickets are now on sale for One Piece Film: Red, the Straw Hat Pirates’ latest big screen adventure, and Japan’s highest grossing film of the year. With an original story from series creator Eiichiro Oda, you won’t want to miss this music-filled adventure when it arrives exclusively in cinemas and IMAX screens in the United Kingdom and Ireland from 4th November 2022.

One Piece Film: Red is the latest feature film based on characters from the best-selling Weekly Shonen JUMP manga series about a crew of pirates sailing the seas in search of a legendary treasure. The series’ original creator Eiichiro Oda is overseeing the project as Executive Producer, and also designed the original characters for this brand-new story, including Uta, the most beloved singer in the world – and the daughter of Shanks, the legendary pirate who inspired the series’ protagonist Monkey D. Luffy.

One Piece Film: Red is directed by Goro Taniguchi, who previously helmed One Piece: Defeat Him! The Pirate Ganzack!, the very first One Piece animation, with a screenplay by Tsutomu Kuroiwa (One Piece Film: Gold).

“One Piece is deeply loved in the United Kingdom and Ireland, and rightly so,” says Andrew Partridge, CEO and Co-Founder of Anime Limited. “It’s our privilege and honour to be able to bring such an exhilarating chapter of the One Piece saga to the big screen in the biggest way possible.”

One Piece Film: Red became a phenomenon on its release in Japan earlier this year, where it has been the #1 film at the box office for over six weeks. The film continues to break box office records, and has earned over ¥13.9 Billion (£85.5m) to become this year’s highest grossing film in Japan. The film’s main theme song, “New Genesis” by Ado, also made history by becoming the first Japanese song to top Apple Music’s Global Top 100 charts.

Uta — the most beloved singer in the world. Renowned for concealing her own identity when performing, her voice has come to be described as “otherworldly.” Now, for the first time ever, Uta will reveal herself to the world at a live concert. As the venue fills with all kinds of Uta fans — excited pirates, the Navy watching closely, and the Straw Hats led by Luffy who simply came to enjoy her sonorous performance — the voice that the whole world has been waiting for is about to resound. The story begins with the shocking fact that she is Shanks’ daughter. 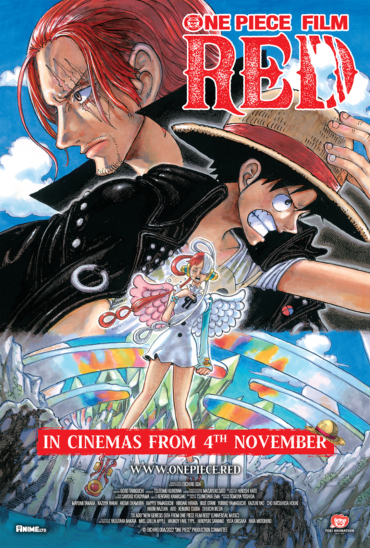 Eiichiro Oda, Goro Taniguchi and Tsutomu Kuroiwa come together for the latest One Piece movie in which Luffy deals with a childhood friend who has lost her way.