When the pandemic first hit in 2020, the medium of theatre was not only one of the first to be hit financially, but also one of the hardest losses across the arts. The enclosed spaces did not allow for social distancing, and only selling a limited number of seats does not normally cover the hire of theatres, let alone the staff (from the front of house to the actors themselves) to participate in the shows. Streaming live performances of big hits like Hamilton did help, but it did not save many small productions that did not have backing from major companies, like the Whole Hog Theatre’s Garden of Words, or Immersive Dracula, cancelled merely months after their respective announcements. It seemed for a time that going back to the theatre was not only risky but also not kind to less-than-big budget performances that are guaranteed to make money. Luckily, the world of theatre is not gone, and despite a loss of small venues, that doesn’t mean that unique and fun performances can’t be seen in the year of 2022. Back in April, it was announced that the Royal Shakespeare Company would be putting on the global premiere of Studio Ghibli’s My Neighbour Totoro, with Joe Hisaishi serving as executive producer and in collaboration with Nippon TV and Improbable. Later announcements included Jim Henson’s Creature Shop to help with the puppets. The fact that tickets sold super quick (myself being in the online queue for a good while) shows the excitement of the new theatre show, but is it as magical as the original movie?

In 1950s Japan, the Kusakabe family move to the country, into a very old and supposed ‘haunted’ house. The family consists of university professor Tatsuo, his wife Yasuko (who’s in the hospital recovering from a long-term illness) and their two daughters: Satsuki and Mei. Whilst exploring the house, the two girls uncover mysterious ‘soot sprites’ in their home, and eventually a mysterious troll-like creature known as Totoro who lives in the forest near their home. The adults cannot see these mystical creatures, but Satsuki and Mei discover more about the quiet countryside, just as their mother’s condition starts to change. 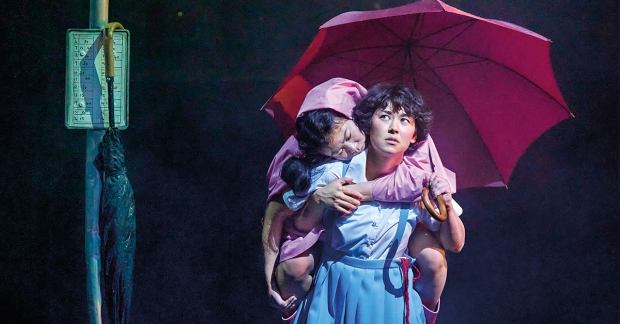 I went into this play completely blind. I didn’t read much news coming out for this performance, and none of the reviews either; I wanted to experience it fresh with my three friends, all of us fans of the original movie and Studio Ghibli as a whole. My initial reaction was that all the cast are Asian. If you’ve kept on top of the reporting, this won’t be news for you, but as I’d previously seen Kiki’s Delivery Service and Princess Mononoke theatrical adaptations with mostly white casts, I was expecting the same for Totoro as well but was pleasantly surprised. Not only is the whole cast Asian, but there’s a lot of Japanese phrases thrown into conversation in the show (mostly small phrases like ‘good night’ and ‘hello’ when picking up the phone) and the singer Ai Ninomiya also switches smoothly between Japanese and English. It made not only the whole performance feel unique among the other shows on stage, but considering the number of children in the audience, it’s wonderful to have them experiencing different cultures and have it feeling so authentic. The atmosphere was so wonderful and welcoming! It should also be noted that the stagehands are also dressed in what regular Japanese stagehands wear: long black robes with veils. Again, adding a level of care, and unique experience that you wouldn’t get with another stage adaptation, but I also loved the running gag they had going on, where it seemed like the stagehands were being ‘pushed’ onto stage to suddenly perform a minor role; from a doctor to a student at the school, it was funny seeing them jump onto stage, and suddenly realised they had to play a different part.

The play itself is over two-and-a-half hours long, including an interval. The original movie was only an hour- and-a-half, but the play covers almost all the original film and adds a few additional scenes to help flesh out some of the characters outside of Satsuki and Mei. The additional scenes are mostly very brief, and often have new songs to accompany them. My personal favs were the one small scene with the mother and father that had a very emotional song to reflect the tension and sadness between them. As a parent, I did find myself getting emotional, but it was also nice to have more for the mum character to do, considering she is the emotional core of the finale. The other scene I really liked, that also got a good laugh from the audience, is the one where Kanta talks to his father about ‘girls’. Overall, they felt like ‘deleted scenes’ brought to life on stage, rather than just padding to warrant the actors’ time and money.

So, the big question is: how did they manage to not only bring the icon Totoro but also the giant Cat Bus onto the stage? Well, if you look up press photos for this show, you’ll notice that they have not included images of either of them and at the beginning of the play, they stress no photography is allowed to keep the magic of Totoro safe for others to experience. To keep with this, I’m not going to go into too much detail on what they looked like or anything like that, because like they said, it’s best experienced for yourself. But obviously I have to say something, otherwise it wouldn’t be a very helpful review. Let’s start with Totoro. I was adamant that they wouldn’t be able to do the scene in the film where Mei sits on his tummy…but I was proven wrong! The puppet itself, when you see it in full view, is amazing; the level of details (including his mouth) and attempts to make it as expressive as possible and seeing the work of stagehands to bring it to life is phenomenal. As for the Cat Bus, I will admit, when I first saw it, I was a little disappointed. It’s not a puppet in the same way that Totoro or the little trolls that we see at the beginning are, but I ended up loving it as the play went on; the design choice becomes clear once they show how Totoro gets ‘in’ the bus itself, and again, the stagehands move so fluidly, with sound design helping it to sell how it’s flying/racing across the town in a truly magical way. 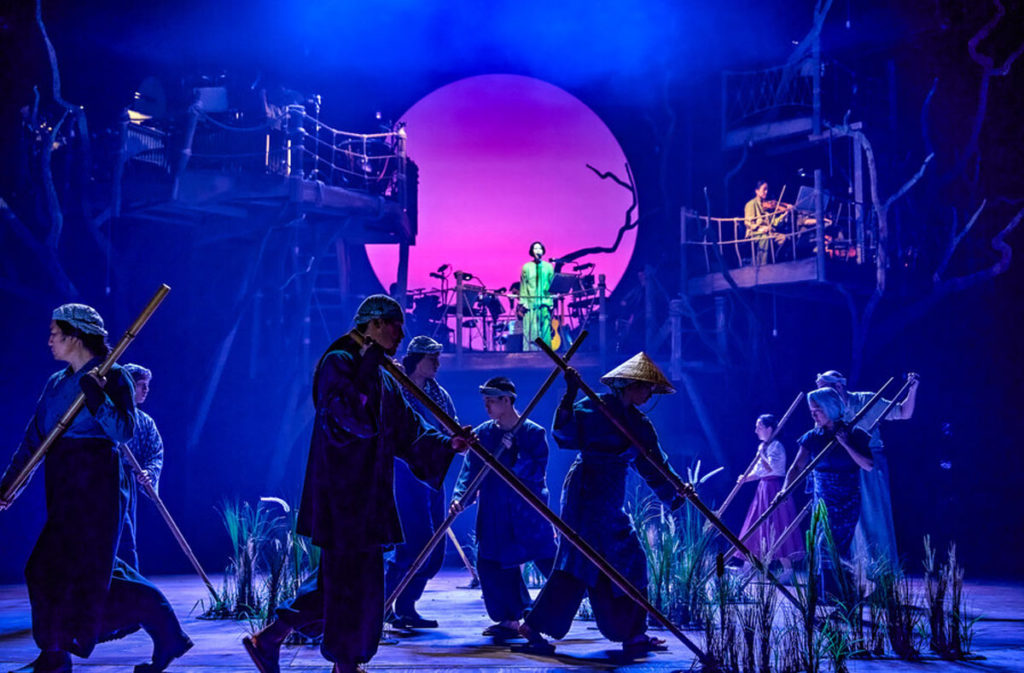 In terms of the stage layout, the focus is the house, which sits on a rotating platform and mostly serves as the old house that the family moves into, but a quick rotation also serves as their neighbour’s home, as well as the hospital the mother resides in, which is very clever. When the forest becomes a focus, there are a lot of scene transitions and backdrops to help sell the mysterious wonder of Totoro’s home. What struck me was the orchestra; they weren’t at the very front or to the side, but at the back with a moonlight backdrop. This not only gives the music itself a great acoustic, but also gives the singer a beautiful background as she sings. Speaking of music, as Joe Hisaishi returns as executive producer and composer, of course the score sounds amazing, and the new vocals all hit perfectly at the right moment and never outstay their welcome.

My Neighbour Totoro is the kind of movie that should only work in animation, but the care, attention, and love that’s gone into crafting this story for the stage was amazing to witness. I hope this opens more doors to see how creative we can be in bringing more anime films to the stage, but for now, if you’re a fan of the film or just love the theatre, this is definitely one not to miss.

My Neighbour Totoro is showing at the Barbican Theatre until Saturday 21st January; purchase tickets here.