Volume 7 of Shinobu Ohtaka’s Orient started ramping up the action in the Awaji Island arc, but confusingly pulled its strings in the wrong direction, ruining a lot of the character development put into Musashi, which did leave me a bit cold. Jumping back in with these next two volumes, however, changes this feeling completely as it successfully ramps up the stakes and takes the battle in a very interesting direction.

Volume 8 starts to set all this in motion as it turns the focus back on the Obsidian Eight, the mysterious figures who are trying to claim the Obsidian Goddess for themselves and are seemingly in league with the Demons. While we haven’t seen all eight of them yet, this volume more firmly introduces us to Yataro Inuda, the Jabba the Hutt-esque “big daddy”, who has placed his half-demon daughters into the Uesugi army as spies and saboteurs. As we discovered at the end of Volume 7, Musashi’s burgeoning love interest, Michiru, is one of them, however her initial attempt at stealing the Goddess ends in failure, with the Uesugi army capturing them both and falsely accusing Musashi of being the spy. With our hero in chains, this gives the enemy a perfect opportunity to strike as the saboteurs reveal themselves and launch a devastating assault on the Uesugi castle. In the midst of battle, Musashi must figure out his feelings for Michiru as he is forced to takes arms against her father after being teleported to the enemy base on Awaji Island by Shiro’s demon blade powers.

Lest to say this doesn’t go so well, with Musashi completely losing her to the enemy before he’s dumped back in the now ruined Uesagi castle. As we reach Volume 9 in an absolute state of disarray, there’s no option left but a direct assault on the island, which is where the Uesugi’s brilliant tactician, Kuroko Usami, comes into play, as she is pitted against another member of the Obsidian Eight and mastermind of this entire operation, Seiroku Inukawa, in an intricate game of chess with everyone’s lives on the line. 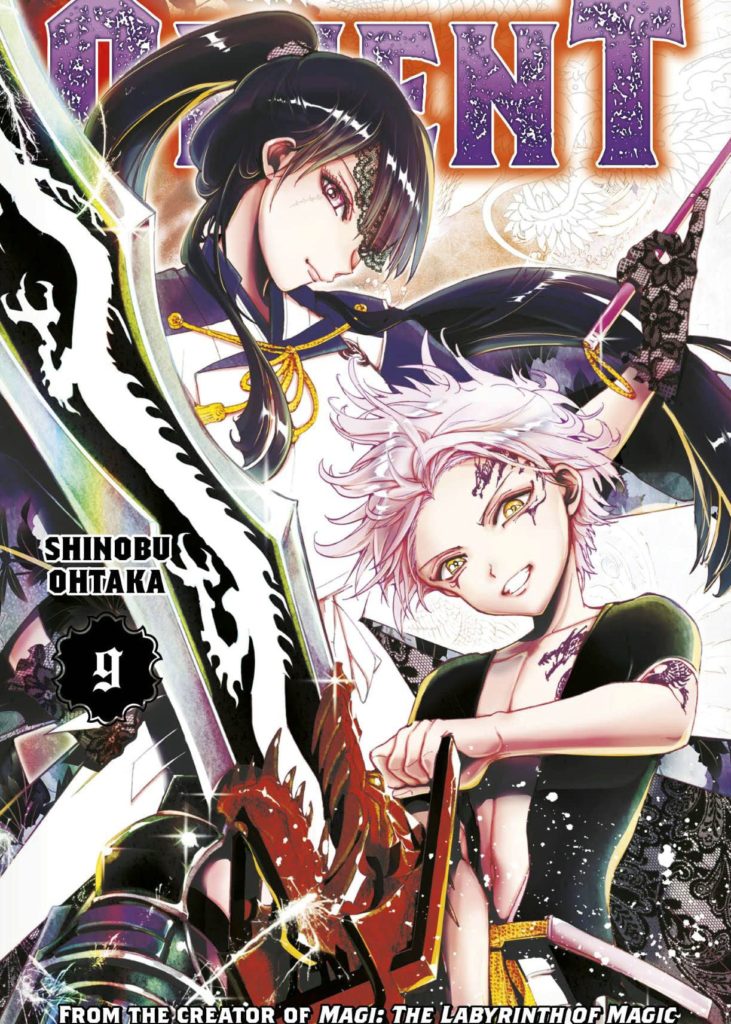 While these two volumes don’t resolve all the issues I’ve had with this series, they do a lot right in how the action is played out and how the overall plot develops. What I’m tending to find is that the series is at its strongest when the Obsidian Eight is involved, as it gives our heroes an intelligent enemy to fight against. While the demons might look mightily impressive, at the end of the day they are just monsters and there’s nothing really there other than their creative designs to get you invested. The Obsidian Eight however offer a good mystery to be unravelled and have terrifyingly strong powers to really whack everyone about. Inuda is still the weakest of the members we have seen so far and, as I mentioned previously, lacks originality in being that fat, repulsive stereotype, but it does try to give some humanity to his character as he is seemingly booted and pushed around by the other members. Shiro of course remains out-and-out insane, but the addition of Seiroku gives the group some smarter grounding and makes them more dangerous as a whole. The tactical back-and-forth we get here between him and Kuroko is fantastic as they keep trying to outdo each other with their plans, and it does produce some great “how are they going to get out of this one?” moments.

The action that results from all of this is great too, as we are treated to a ferocious battle between the Uesugi and Inuda’s half-demon daughters in Volume 8, while Volume 9 gets to show off the prowess of different characters as the assault on the island switches between different perspectives. I like how it shows off all the different demon blade abilities, particularly in how they all have different strengths and weaknesses. While some focus on outright power, there are some that are better when working in a team, delivering buffs and making others stronger, while there’s even one that can heal allies. It’s a pretty decent application of a fantasy-like magic system, just pushed through the medium of swords instead.

Switching the focus between different characters does mean that there’s a lack of space to develop them all, and it feels like a lot of the cast either gets quickly discarded or has been conveniently forgotten about. Our main losses here are Kojiro and Tsugumi, who, apart from the odd few pages in Volume 9, are just not active in this part of the story. Considering they are supposed to be main characters, this seems like a waste as, even though the story wants Musashi to be on his own, it would have been nice to see what the rest of the team are getting up to. Musashi himself though still struggles to be a convincing lead which is also part of the problem. He does have his moments, but parts where he is being dumb and/or clueless are always frustrating to follow instead of being the laugh out-loud moments I think the series is intending them to be.

Everything still looks good though, as the series continues to prove solid with its character and monster designs. The way some are melded into half-human, half-demon forms can be horrifying, particularly Inuda’s half-demon daughters in the way they take the form of Komodo dragons. Some panels can still look incredibly busy in places, but I am getting used to this highly detailed style now where I think it works better taking it all in at a slower pace.

Orient continues to be published by Kodansha in both digital and physical formats. The physical copy continues to be well presented, while translation for both these volumes is handled by Kevin Gifford and reads perfectly well with no issues to speak of.

As much as this series can be frustrating to read as it constantly missteps with its unconvincing lead, it can still bring enough punch to the table to lure you back in. Volumes 8 and 9 of Orient produce an action-packed combination that focuses on the battle between the Uesugi and the members of the Obsidian Eight who are backing up Orochi on Awaji Island with some horrific destruction and a fantastic back-and-forth tactical battle. It’s just a shame those long-standing issues hold it back, while it misses the presence of some of the main characters who continue to pop in and out of existence on demand. 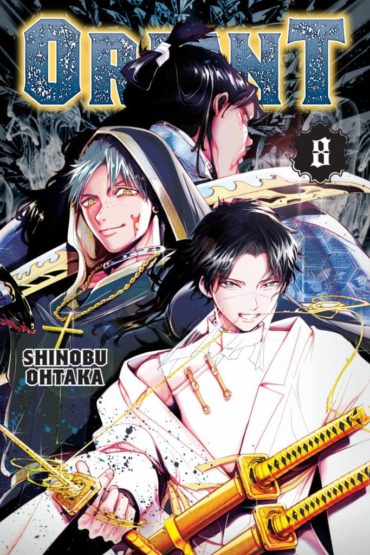