“Other real estate companies have recently started marketing themselves as such… so why don’t we jump on the ‘LGBT Friendly’ bandwagon?”

The minute Miss Kozue blithely makes this suggestion to her boss, Toshimitsu Yamamura, he’s on his guard. Owner of a real estate company, Toshi is gay and in a long-term relationship with his boyfriend, care worker Gonta, but he’s been very careful to conceal this fact from his young (and keen) employee. But she’s quite carried away with her idea, wanting to put a rainbow-coloured flag in the window and Toshi is very uncomfortable with that, knowing that Miss Kozue doesn’t really understand the real-life implications of such a gesture. Easy-going Gonta is less bothered when Toshi discusses his worries with him and reminds him that it’s not just LGBT people who have difficulty finding apartments; people needing care have the same problems. Toshi is excited by this suggestion; he can advertise the agency to people with any kind of special requirements, such as musicians or pet owners as well. Now he and Gonta can sit back and enjoy the roll cake that Toshi has baked for him, with his sweet tooth (and his waistline) in mind.

Their daily routine continues, with Toshi preparing more low-calorie sweet treats for the two of them but also inviting round some female friends from his yoga class to sample his cooking. But when an old university friend of Gonta’s, ‘Pororin’ opens a gay bar ‘for mature adults’ and invites the two to the opening, Toshi takes along a specially wrapped bag of freshly baked oatmeal cookies as a gift. Pororin turns out to be in full-on cliché camp gay bar owner mode, wearing a loud shirt, and asking Toshi indiscreet questions about his sex life with ‘Gonnie’ which, understandably, puts Toshi in a really bad mood. The final straw comes when Pororin tells them how much he hates home-made food. But if this encounter stirs the calm waters of Toshi and Gonta’s relationship, a phone call from Toshi’s parents sparks a life-changing encounter. Toshi’s aunt has had a fall and has had to go into care, so she’s sending Toshi ‘one thing she can’t find a home for’. What can this possibly be? Now read on…

Having recently come to the end of another series of The Great British Bake-Off, keen bakers (and observers) might be looking around for other cake-based media – and what better than this genial slice-of-life, with each chapter featuring a recipe for a sweet treat and the emphasis being on healthy living and low calories: recipes range from Coconut Whipped Cream Roll Cake (Swiss Roll in the UK) through Almond Milk Pudding to Baked Tofu Doughnuts – delicious! Some of the ingredients: okara (soy pulp) and sake lees might be rather difficult to find in UK shops but recipes like Spiced Gâteau au Chocolat or Oatmeal Cookies are definitely doable. Toshi talks us through the instructions as he prepares his recipes, much as Shiro does in Fumi Yoshinaga’s What Did You Eat Yesterday? (undoubtedly an influence, and an excellent one, on this title). There’s an explanatory page at the end of each chapter called Toshi’s Bite-Sized Notes with extra culinary tips relating to the featured recipe.

If you prefer your Boys’ Love protagonists to be young and good-looking, then this story will probably not be your cup of tea. But passing it by would be a shame as it’s full of dryly witty observations about contemporary life from a gay perspective – and includes some delicious (and low-calorie, maybe lower?) recipes for cakes and desserts. The central couple make a believable middle-aged pair, comfortable in their relationship, although understandably wary of the gaze of others like Miss Kozue who tend to make assumptions without seeing the possible implications. There’s the chapter in which Toshi remembers the agonies he went through once ordering a birthday cake by phone from a bakery for Gonta. He found himself unable to answer the most basic questions (how many candles?) because of his fears that would reveal that he was gay to the bakery – and then how could he pick up the cake in person? All the agonizing led to him cancelling the order and baking a cake himself; the first of many!

This is the first manga I’ve read by Masaomi Ito and the first, I think, to be licensed in English although much of his earlier output is seinen or shonen. The art is frankly quite rough and sketchy in places, although it tells the story effectively. The mangaka’s wry sense of humour comes through in his depictions of the yoga class Toshi assiduously attends and the four 4-koma sketches at the end about Pororin and his bar ‘Sorry ‘Bout That’.

But there are a few uncomfortable moments. When the LGBTQ+-curious Miss Kozue attends a lecture on LGBTQ+ awareness, she finds herself in a discussion group with a cross-dresser who is portrayed here in silhouette (referring back to Matsuko Deluxe, a cross-dressing TV personality whom she’s ingenuously told Toshi she likes). I don’t think that the mangaka intends to portray this character as black although the all-black figure raises an awkward question in the reader’s mind; I’m assuming that the plan was to remind Japanese readers of the TV personality without actually depicting them.

The translation for Tokyopop is by the ever-reliable Katie Kimura who copes effortlessly with all the recipes. A second volume has already been released in Japan and this first volume is currently available as a digital version; the print version is scheduled for 14.02.2023.

This is the third Boys’ Love manga I’m reviewing this month by male mangaka and all three of the titles feature different aspects of what it means to be gay in contemporary Japan. Two of the three have a Teen (13+) rating, although, if I’m honest, I don’t think this title will appeal to a young teen audience (unless they’re keen on cooking low-calorie sweet treats)! 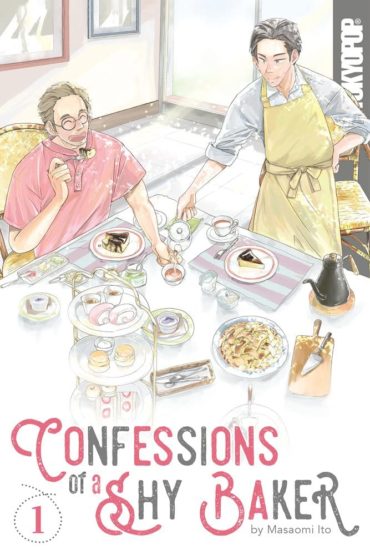