This book contains sexual content including nonhuman physiology and is intended for an audience aged 18 years and up.

“Snakes take living sacrifices in exchange for prosperity. You must never allow them to put you under their thrall, ya hear?”

Komazu, a member of the sparrow clan, lives a carefree life in the forest – maybe a little too carefree as one day when he’s out collecting food, a wild boar stampede threatens to crush him. Saved at the last minute by a white snake, he assumes he’s going to be eaten by his saviour – but the snake is not in his hungry phase and is angry that Komazu should even think that way.

They meet again in human form when Komazu finds a kimono in the river which is claimed by the white snake; it seems that he was washing it but it was swept away downstream. Komazu is still on the defensive, suspecting that the white snake boy plans to eat him, yet he’s fascinated by his new dangerous acquaintance – but to his surprise, he’s angry, his feelings hurt by the insinuation. “Do you know just how it feels to hear just how much the food you were trying to eat hates you?” When white snake Shiratō goes back to look for his kimono the next day, Komazu has washed and dried it for him. But with matters still tense between them, Shiratō suddenly freezes – he’s spotted an eagle and eagles are bad news for both snakes and sparrows. United by their fear of a common enemy, the two are getting to know each other better… but is it safe for the sparrow to let his guard down in the white snake’s company?

Komazu’s curiosity about his new friend leads him go asking about him at the forest market. Shiratō goes to find him and shows Komazu the flower bed he’s cultivating, explaining that every time he eats, he grows flowers from seed to commemorate the prey he’s just consumed. “I’m an egoist who wants to create new life for each life he takes.” And Komazu begins to see Shiratō in a new light; the two find they have much in common, so when Shiratō takes Komazu to observe (from a safe distance) the harvest rice festival at which the snakes traditionally make the rice ripen, they get drunk on a gift of alcohol Komazu has brought. Komazu loses all his inhibitions, dances and sings (which is what sparrows do to attract a mate) and makes a pass at Shiratō. But Shiratō – under the influence of drink – tries to eat his sparrow friend and horrified, beats a hasty retreat. It seems as if in spite of their growing feelings for each other, they can never be partners.

In mangaka Nna Natsuo’s first manga (they have since produced shojo manga under the name Hazuki Aoi) the characters are anthropomorphic in that they that can slip from their animal, reptile or bird forms into beings resembling humans, yet retaining certain physical characteristics pertaining to their own kind, notably genitalia (modestly referred to here as ‘private parts’). This is possibly the first Boys’ Love manga I’ve encountered that includes ‘nonhuman physiology’ depicted in considerable detail when it comes to ‘sexual content’; Nna Natsuo has evidently done their research thoroughly (as confirmed in the detailed afterword). If this makes the manga sound unnecessarily clinical, it’s far from the case and those looking for a heartfelt and romantic relationship will find plenty to enjoy here.

So how does The Snake Who Loved a Sparrow work as a piece of storytelling, given its relatively unique premise exploring the possibility of love between two different species? Nna Natsuo’s artwork is convincingly and attractively drawn, from the human versions of the main characters to their snake and bird selves, with evocative forest landscapes and the home of the snake tribe contrasting with the sparrow clan’s village. The main characters are sympathetically portrayed so that the reader forgets the unlikely underlying premise and is rooting for their relationship to work. The scene with the harvest festival and the legend involving the snakes’ influence ripening the rice has a folkloric feeling which adds to the charm of the story.

The Snake Who Loved a Sparrow has been translated for Tokyopop’s Love x Love by Katie Kimura who has again delivered a fluent and enjoyable read. The Mature (18+) rating refers to the sex scenes which, although earned and consensual, are nevertheless a little ‘different’ for the reasons explained above. As with other titles in Tokyopop’s Love x Love list, this has appeared in digital first with the paperback to follow on February 21st 2023.

Even though this is a story of an inter-species relationship, it has a timeless feel, like a Japanese folktale – and the relationship between Shiratō and Komazu is touchingly portrayed, showing us that people from very different backgrounds can learn to understand one another and even fall in love, with a little give and take on both sides. 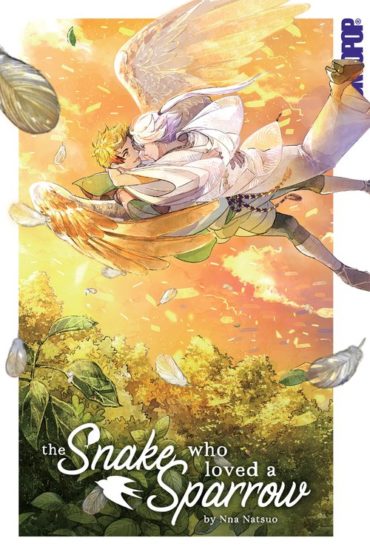 Title
The Snake Who Loved a Sparrow

In the snowy wastes of Hokkaido, local farmer Haruki comes across wildlife photographer Narumi snapping wild swans – and, on impulse, offers him a place to stay to complete his project. Will this chance meeting lead to friendship for solitary Haruki – or maybe something more?