She and Her Cat (not to be confused with the similarly named manga series A Man & His Cat) started life as a 5-minute anime short created by Makoto Shinkai in 1999. The short was later expanded into a novel in 2013 by Naruki Nagakawa and became a bestseller in Japan. Now that same book has finally made its way into the English market, where it hopes to captivate cat lovers and Shinkai fans alike. Does it succeed? Let’s find out!

This book is made up of four short stories, all of which follow a cat and their owner living on the outskirts of Tokyo. In the first one, we meet Chobi, a cat whose owner rescued him from a cardboard box as a kitten on a particularly cold and rainy day. Chobi loves his owner more than anything and watches over her as she goes through the ups and downs of a difficult relationship, always there to lend a paw when she’s particularly upset.

The first story sets the tone perfectly for the rest of the book, where we meet women of various ages and backgrounds and their cat companions who support them, no matter what. After Chobi, we meet Mimi who’s more a feral kitten and a little hard of hearing. She lives near a young woman who spends her days bunking off college and painting, dreaming of the day she can make a living out of her work. Mimi loves watching her and even if the woman hasn’t taken Mimi in as an official pet, they still share a close bond.

Unexpectedly, the stories begin to link up as they go on. Mimi knows Chobi (and has a huge crush on him), and their owners, too, are acquaintances. The perspective flips back and forth between the cat and owner, giving us glimpses of their lives and their relations to the other characters in the stories. It’s rewarding to watch it unfold and follow the connections, which often relate in ways you wouldn’t expect.

The problems each of our cast is going through vary quite a lot too. In the third tale, we meet cat Cookie, who has been bought in the hopes of bringing the owner Aoi out of her shell after the death of a loved one has left her unable to face leaving the house. This story in particular reinforces how important having a furry friend in our lives can make a tremendous amount of difference to our mental health and well-being.

The fourth and final chapter in the collection follows a widow, her dog Jon and the stray cat Kuro. This one perfectly caps off the rest of the stories, since Jon is known by every cat in the neighbourhood and gives them help and advice to prevent fighting over territory. His relationship with Kuro is also an interesting one since Kuro is a good deal older than any of the other cats we’ve met across the book, so he’s not a young whippersnapper who needs putting in his place like Mimi or Chobi.

Perhaps what I enjoyed most about this book wasn’t just the individual stories, but how well all the scenes flow together. Author Naruki Nagakawa manages to make the transition between human and cat seamless, picking up from one another perfectly and each perspective adding a great deal to that of the other. I wish we had spent just a little bit longer with each character on the whole, but that doesn’t prevent it from being a charming read. I also like that, although the cats have a bit of a more unrealistic view of life and how humans could solve their problems, the dialogue always feels relatively grounded. If you’ve ever owned or spent substantial time with a cat before, you will certainly believe that the things these cats think are true to life and get a laugh out of it.

This is a spirited book, one which isn’t afraid to be a little whimsical at points but all the same, will draw the reader into the charming world that Shinkai and Nagakawa have created. Coming in at only 153 pages, it’s not a tremendously long read either, which I think works to its benefit since you can flip through it relatively quickly and remember how everyone relates to one another.

She and Her Cat comes to the UK thanks to Doubleday and is available in hardback, as an eBook or an Audiobook. The book has been translated by Ginny Tapley Takemori (credited as the translator behind the popular Convenience Store Woman) and as you’d expect of such a talented and renowned translator, their work reads well with no issues. Also included in this release are four illustrations by Rohan Eason, which appear to be unique to the English release. These images each capture a cat and its owner, perfectly depicting the relationship between the two.

Overall, She and Her Cat is a charming read that fans of Shinkai’s original work and cat lovers alike will want to get their hands on. Whether you’ve seen the anime short (or mini-series) or simply find yourself looking for a new animal-focused book to add to your collection, this one is for you! 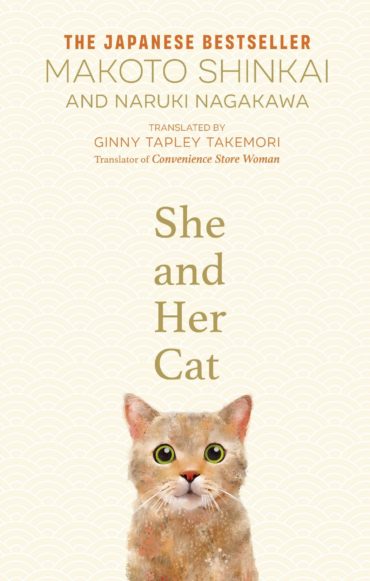 Title
She and Her Cat

Weathering With You Volume 1 Review

The manga adaption for Makoto Shinkai’s Weathering With You is finally here, but does it capture the same magic as the film?