Readers may be familiar with mangaka Masakazu Ishiguro thanks to SoreMachi: And Yet the Town Moves or the ongoing series Heavenly Delusion. But in between the long-running series, Ishiguro has quite a collection of single-volume manga to his name. One such example is Skygrazer, which is making its English debut, thanks to Kodansha.

From Chapter 2 onwards, we’ve moved a few years into the future where two of the boys reunite after not seeing each other in a decade. One complains about his failures as an actor when an episode he was in never made it to air due to a murder on-set. But this murder may not be an isolated incident, as we find out when the focus swaps to rookie detective Saeko Sakuraba.

Saeko is investigating a collection of strange incidents in Skygrazer, which don’t seem to be connected on the surface but quickly start threading together, the deeper Saeko investigates. It’s not long before the rookie finds themselves in over their head as they unearth a conspiracy that no one could have imagined in an apartment complex.

While I did enjoy the eventual ‘final arc’ of the book, I must say that the individual stories leading up to it varied in quality a great deal. There’s not enough time spent on each character (besides Saeko) to really get to know them, which makes it hard to get invested. And even Saeko boils down to being a plucky rookie looking to leave their mark on the world, which is endearing but lacks depth in the long run.

This isn’t helped by the artwork which is quite flat. Backgrounds are quite detailed, but a lot of the characters are drawn with solid colours and lack shading or detail. This made it difficult to tell who was who in certain scenes (particularly with the story jumping a decade into the future after Chapter 1), which is again unhelpful when it’s already difficult to get attached to the characters. I appreciate that this is one of Ishiguro’s older works, which explains why the art isn’t as good as the mangaka’s more recent output but it’s still disappointing, given the creator’s reputation.

Unfortunately, in the end I think it’s difficult to recommend Skygrazer to anyone except big fans of Ishiguro’s work or if you’re particularly interested in seeing how the story comes together. The characters and art might be a weakness, but the overall concept and how the plot ties together are hard to complain about. I certainly don’t feel that reading it was a total waste of time, and it has proven memorable as I went back to spot some of the hints and connections.

As previously mentioned Skygrazer comes to the West thanks to Kodansha and has been translated by Ko Ransom. The translation reads well with no issues to note. There is also a glossy page at the beginning of the book (a black and white photo with a red variation of the logo), although there’s no colour artwork included beyond that, which is disappointing.

Overall, Skygrazer is an interesting concept and while it doesn’t fully deliver in the character and artwork department, it’s still well worth checking out if you like Masakazu Ishiguro’s other works. I think it’s a difficult recommendation otherwise, which is a shame!

A free preview can be found on Kodansha’s website here. 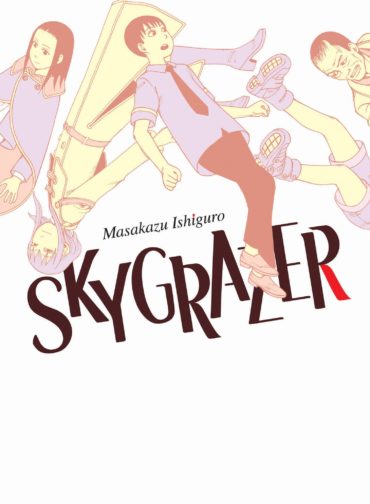