Recently One Peace Books impressed when they released Volume 1 of Usotoki Rhetoric, but will they continue to please with their new debut Captain Corinth: The Galactic Navy Officer Becomes an Adventurer? Let’s take a look!

This light novel adaptation is set in the distant future. It follows Captain Alan Corinth, who pilots an Imperial spaceship and is hunting for the home planet of The Bugs, alien creatures that threaten the future of humanity. Unfortunately, Alan’s ship is attacked and he’s forced to evacuate as the sole survivor of the vessel.

Alan crashlands on an unknown planet, which luckily has air he can breathe and lifeforms he can eat. A few days into his life on this new planet, he encounters a group of humans being attacked by wild monsters, but by the time he gets close enough to intervene, all but one has died from their injuries. The woman still alive has lost an arm and a leg, but thanks to some of Alan’s technology he manages to save her life and her limbs will even regrow in time.

Far from home and with no chance of being rescued, Alan has no choice but to adjust to life on this new planet. While he’s used to a high-tech world, here it seems humans rely more on swords and magic. He quickly discovers that he can’t understand the language either, putting him on the back foot when it comes to communicating with the woman he’s saved. She understands at least that he helped her and is willing to travel with him to keep herself safe from further attacks, plus as a way of thanking him, she can help Alan learn a little of the language and maybe even some magic.

I have to say that, interesting as the premise of Captain Corinth is, the execution is boring. Now some of this may be the original source material, but I think a significant portion of the problem comes from this adaptation. The first chapter rushes you through the set-up of the world, filling each page with a large amount of information to the point where it’s impossible to retain it all. This is not helped by the fact the series will info-dump whenever possible about important things that definitely could have been explored more slowly and carefully, as opposed to it all being upfront.

None of this is helped by the fact that the manga doesn’t flow well. Quite often I found myself wondering if I’d missed a page and having to flip back; I even went as far as making sure my file was correct because some of the jumps page-to-page felt that unnatural. So between this and the amount of jargon being thrown at you, this manga is difficult to engage with – to the point where it’s quite boring.

With so much packed in, it’s impossible to get to know or connect with Alan, who ends up coming off as a very bland protagonist because of it. Although I did appreciate that despite all the technology he has at his disposal, he couldn’t readily communicate with people on this planet. Most protagonists in this situation are given a magic spell or something similar to instantly translate everything, so seeing Alan struggle is at least novel for the genre.

Unfortunately, the issues with this series also stretch to the artwork by mangaka Tomomasa Takuma (Record of Lodoss War: The Grey Witch; Code Geass: Nightmare of Nunnally). There’s often not much room for the art due to pages being overwhelmed with dialogue bubbles, but even when there is room, the characters are quite flat and lacking in detail. They’re also frequently very off-model. Again, this just makes it hard to care about Captain Corinth.

Captain Corinth Volume 1 comes to the West thanks to One Peace Books and has been translated by Laura Egan. The translation reads well with little to complain about. As usual for a One Peace release, there are a few instances of dialogue not fitting in speech bubbles (despite there being room if they just moved it across a little bit!) and the font choice for this release can be difficult to read in bubbles with a lot of text in. It’s disappointing, particularly given how poor the content of this first volume was – it didn’t need localisation problems on top of it.

What is also a shame is that at the time of writing One Peace only appears to have the license to the Captain Corinth manga and not the light novel, so I can’t even easily check if some of these problems (like info-dumps) are limited to the adaptation or not.

The series is ongoing in Japan with five volumes and One Peace has Volume 2 of the English release scheduled for March, with Volume 3 in July.

Overall, it’s hard to describe Captain Corinth Volume 1 as anything other than a disappointment. Usually, there’s at least something positive to be said about a given volume of manga but the flaws of this one outweigh anything else. Sadly, this is one to avoid. 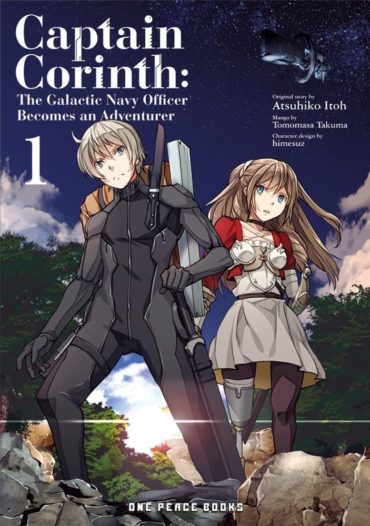