There’s been some notable buzz surrounding The Wrong Way to Use Healing Magic lately as this popular series was announced to have an anime adaptation in the works. To tide us over until then, publisher One Peace Books have brought the original light novel and its manga counterpart to the West, but does the source material live up to the growing hype? Let’s find out!

Our story begins on Earth with protagonist Ken Usato, an ordinary high schooler who needs an umbrella to leave school one afternoon. To his rescue comes Kazuki Ryusen, his classmate and student council vice president and Suzune Inukami, the current school president. The pair are two of the popular kids at school, so Usato who’s nothing but ordinary has never had much interaction with them. Both Kazuki and Suzune are nice people and offer to lend Usato an umbrella and invite him to walk home with them, so with no reason to refuse, Usato takes them up on their offer – not knowing that his life is about to change forever.

On the way home from school Kazuki, Suzune and Usato find themselves suddenly summoned to another world! Here they learn that only Kazuki and Suzune were supposed to be summoned, given their talents for magic and the king of the kingdom apologises that there’s currently no way to send any of them back home, least of all Usato who ended up as a tagalong. So while Kazuki and Suzune begin training for their roles as heroes fated to fight against the demons, Usato finds out he has an affinity for healing magic which is rare in this world.

Usually, the kingdom would be excited to find someone with such a rare magical talent, but in Usato’s case, the king can only apologise as now he’ll be dragged into the kingdom’s Rescue Team and their leader is anything but gentle when it comes to putting trainees through their paces. Rose’s squad has a bad reputation for having trainees run away before they complete their training and now no one wants to get involved with them.

As much as the king wishes to hide Usato from Rose, she’s quick to realise there’s a potential new healer in the castle and storms in to carry Usato off. Now he finds himself in the Rescue Team and every day is filled with gruelling training that threatens to break his very body and soul if he’s not careful. His training is a hundred times harder than what Kazuki and Suzune are put through and the two can’t help but worry about their new friend. Luckily, Usato is strong-willed and won’t give up – in fact, he even finds himself enjoying his new life once he adjusts to it.

This first volume of The Wrong Way to Use Healing Magic is a fairly easy and entertaining read, despite feeling like a prologue. Usato is stuck in training until the very end of the book, so most of our time is spent with him and Rose. Their interactions are usually humourous, with Usato cursing Rose and her playing the difficult and evil trainer which may make her unlikeable to most readers at first, but we later find there is a reason behind this tough persona she puts on. Unfortunately, a lot of the cast beyond that are one-note, including Suzune and Kazuki.

Kazuki fits your perfectly ordinary hero archetype, powerful and willing to risk his all for his friends. He isn’t very enthusiastic about being in another world, but he’s willing to do his part as a hero, provided the king finds a way to send them all home by the end. What’s more interesting is Suzune, who always acted like a model student back home but finds herself able to let loose in this new world and outs herself as one massive otaku. She’s having a grand time in this world and that’s really nice to see, since it’s unusual for a female main character to be this enthusiastic and knowledgeable about fantasy worlds and the tropes that come with them. Like Kazuki, she is, unfortunately, lacking in depth right now, but she’s certainly the character I came away from this book wanting to see more of so I hope the author delivers on that going forward. Although she does risk becoming way more interesting than Usato at this rate, which may become a problem, given she is not the protagonist.

Another problem with this release is that author Kurokata hasn’t done a good job of giving each character their voice, so unless they’re leaning into their character tropes, it can be difficult to tell or remember who’s speaking in a given scene. This isn’t helped by there being quite a few instances where the dialogue swaps to a different character without an indicator of who’s currently talking. However, this is Kurokata’s first published book (they have a couple of other series to their name since), so I’m willing to cut them some slack in the hopes future volumes may dramatically improve. It’s also something that the manga and anime are unlikely to suffer from early on if things do improve, so newcomers may find that a better gateway to the franchise.

Arguably the translation could have cleared up some of the issues surrounding not being able to tell who’s saying what by putting some speaking tags in, so while it’s a problem stemming from Kurokata’s writing, I think it’s reasonable that some of the blame for this lies with One Peace Books for not tweaking it in places.

The Wrong Way to Use Healing Magic Volume 1 comes to the West thanks to One Peace Books where it has been translated by Kristi Fernandez. Apart from the issues discussed above, the translation reads fine. Although the editing leaves much to be desired, given there are a few scenes that need a paragraph break to indicate the passage of time or a shift in perspective. It just feels like the whole thing could have done with another QA pass, which is unfortunately a problem that plagues this publisher’s releases. This volume includes colour illustrations (by KeG) at the beginning, one of which shows all of the cast in an everyday scene and gives a good point of reference for who’s who going forward.

The series is complete in Japan with twelve volumes and One Peace has Volume 2 scheduled for an English release in May, so not a particularly quick schedule if you find yourself eager to carry on. As mentioned, they’re also releasing the manga with Volume 1 currently available and #2 following in February.

Overall, The Wrong Way to Use Healing Magic Volume 1 proves an entertaining entry in the isekai genre despite some problems. Interested readers may want to wait until Volume 2 is out and read them back-to-back to get a better sense of what the series plans to be in the future – or simply wait for the anime which will be a better representation. 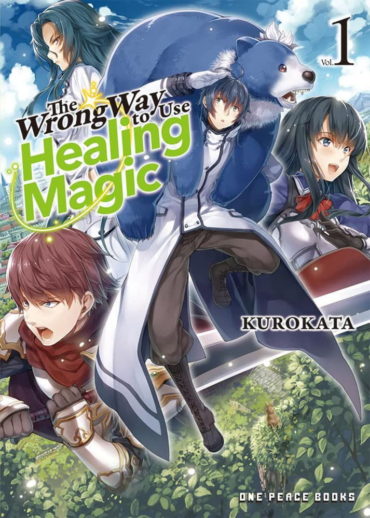 Title
The Wrong Way to Use Healing Magic Volume 1