At this point, it’d be difficult not to have some familiarity with the That Time I Got Reincarnated as a Slime series. Starting life as a web novel turned light novel, the franchise is now made up of several seasons of anime (including a spin-off series) as well as numerous manga series. So perhaps it’s no surprise that a movie has now been created for fans of this popular franchise to enjoy, but does it prove a worthwhile watch? Let’s take a look!

Taking place after Season 2 of the anime, That Time I Got Reincarnated as a Slime The Movie: Scarlet Bond introduces us to a new character in the form of Hiiro, one of the last surviving Ogres like protagonist Rimuru’s companions Benimaru, Shion, Hakuro, Souei, Shuna and Kurobe. Unlike the Ogres we’re familiar with, Hiiro ends up in the nearby nation of Raja in service to the young Queen Towa after she saves his life. 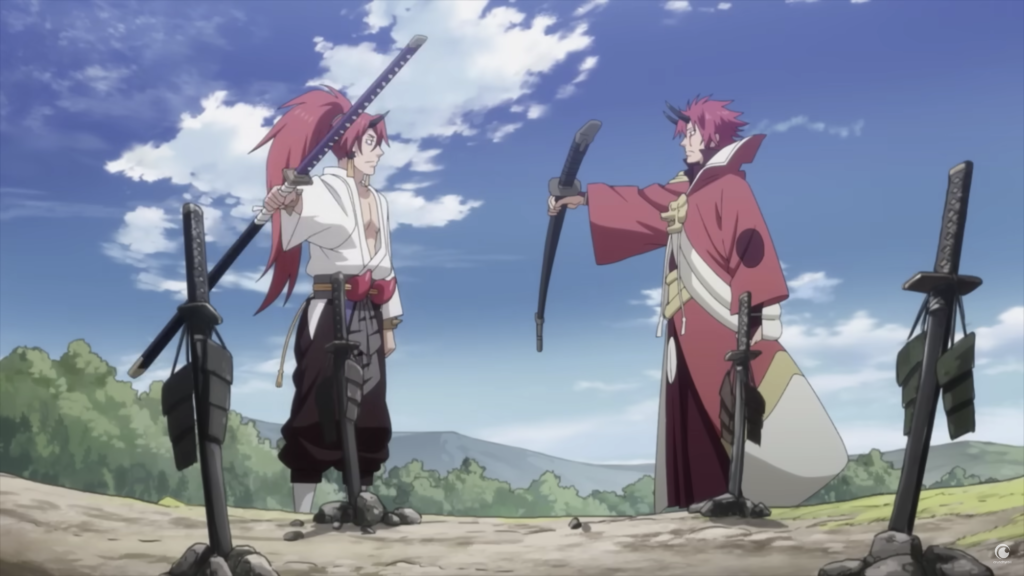 Hiiro believes himself the only survivor of his village, which was wiped out by Orcs (a story viewers will be familiar with from Season 1 of the TV series) and when he hears that Tempest has taken in the remaining Orcs, he immediately heads there to take revenge for his fallen friends and family. Of course, the Ogres who live in Tempest have long forgiven them and work happily alongside the Orcs, so when Hiiro arrives, he’s quickly fended off by Benimaru. Once Hiiro recognises his old childhood friend, he’s delighted that he and some of his companions are still alive and happily serving Rimuru here in Tempest.

At this point in the story, Rimuru doesn’t have the best reputation after becoming a Demon Lord and resurrecting Veldora (who’s known for being one of the most dangerous beings in existence) so you can’t exactly blame Hiiro for charging in, all guns blazing. Once he gets to know Rimuru, he realises he’s someone that can be trusted and might even be able to help out Raja with a problem of its own involving Queen Towa. So Rimuru and some of his companions set off for Raja in the hopes of helping Hiiro, but the problems the country faces are far larger and more dangerous than anyone could have anticipated…

As I mentioned earlier, Scarlet Bond is an original story not present in the source material and as with other shonen series that have similar projects, it puts the writers in an awkward position. Because the story can’t affect the canon material, it means everything has to be wrapped up neatly within the film. As far as the new characters go, both Hiiro and Towa are developed well but the real problem comes down to the villain. 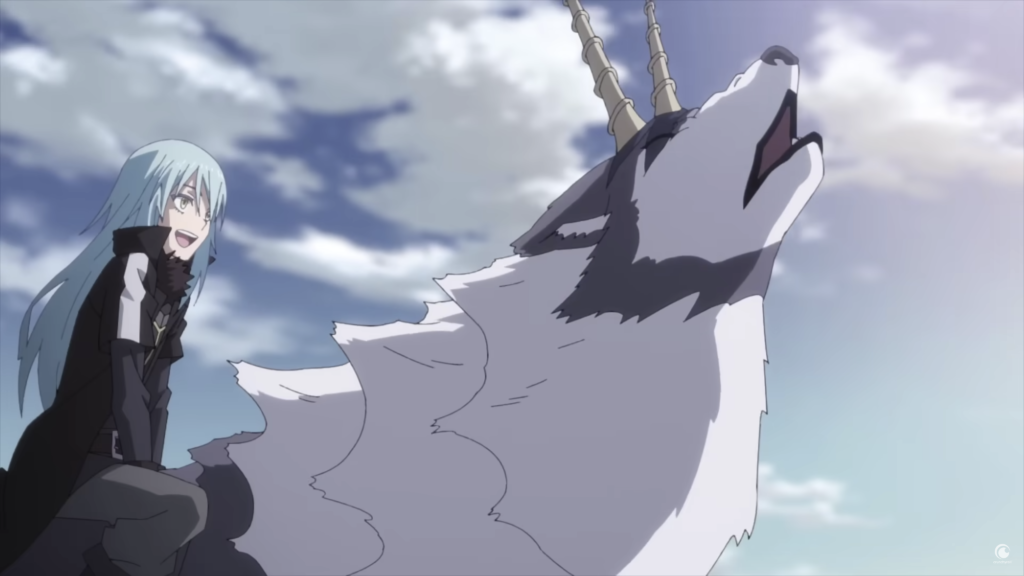 The issue here is that Rimuru is far more powerful than anyone else in this story and that overshadows the struggles Hiiro faces. It’s not particularly compelling writing when Rimuru can come in, punch the enemy and be done with it, so the writers, to their credit, tried to come up with some elaborate chase scenes and other things to prevent Rimuru from defeating them too quickly. But the hurdles Rimuru must overcome wouldn’t usually be an issue for our protagonist, so there’s no escaping how forced it feels and that does take away from the rest of what the movie offers.

As far as the story goes, it’s interesting meeting another member of the Ogres and having him based in Raja is a justifiable reason why we’ve never seen him before (and why he didn’t know about the others being alive). Rimuru has slowly been getting involved with other countries but again, it’s believable that contact may not have been made with Raja yet. Hiiro and Towa’s stories are also well written and as characters, they’re certainly likeable enough, so there’s nothing wrong with Scarlet Bond on this front. It is just let down by Rimuru’s involvement and I somewhat wish Rimuru had stayed behind in Tempest and just sent the group of Ogres by themselves, which would have made for more compelling drama in the end.

I will also say that if you aren’t up to date with at least the TV anime so far, you’ll be confused about who several of the characters are, as well as Rimuru’s status as a Demon Lord. Considering how cut-off the film is from what’s happening in the main series, I think they could have gotten away with setting it slightly earlier and making it more accessible for people who may have only seen the first season of anime. As it stands, only committed fans of the franchise will be able to get anything out of it.

Like the TV series Scarlet Bond has been animated by studio 8-Bit (Blue Lock, Stars Align) and it looks just as good as its TV counterparts. There are plenty of action sequences which deliver exactly what you’d hope to see from a movie outing. The fights are vibrant in colour, easy to follow and happen often enough that they’ll keep viewers engaged until the end. 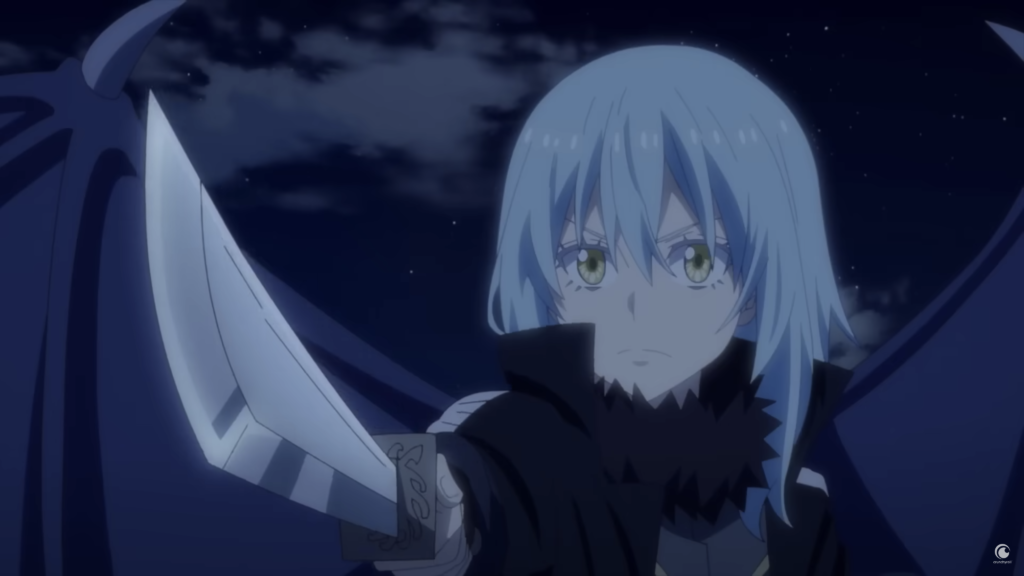 As with the studio, composer Elements Garden (Symphogear) returns to handle the music. Some tracks are reused from the TV anime, but by and large, there’s quite a range of new compositions here and they fit well within the context of the film. The ending theme for the film is “Make Me Feel Better” by MindaRyn, who has also handled the theme song for Season 2. It’s an energetic track that fits the film.

Most of the lead voice actors also make their return alongside newcomers Yuuma Uchida (Rio in Heroines Run the Show, Kyo Soma in Fruits Basket) who plays Hiiro and Riko Fukumoto (who doesn’t have any anime credits I could readily find but is well known in the live-action sector) who plays Towa. Both actors play their roles well, suit the characters and don’t feel out of place among the other members of the cast.

That Time I Got Reincarnated as a Slime The Movie: Scarlet Bond is being released in UK cinemas thanks to Crunchyroll. It will be available in its original Japanese language with English subtitles as well as English dubbed. Your local showing can be found here.

Overall, That Time I Got Reincarnated as a Slime The Movie: Scarlet Bond is a fun instalment of the series, but it’s not without issues and certainly isn’t something you can enjoy without having kept up to date with the TV series. It’s an interesting story that’s held back by being divorced from the canon material and unable to leave any lasting effects. 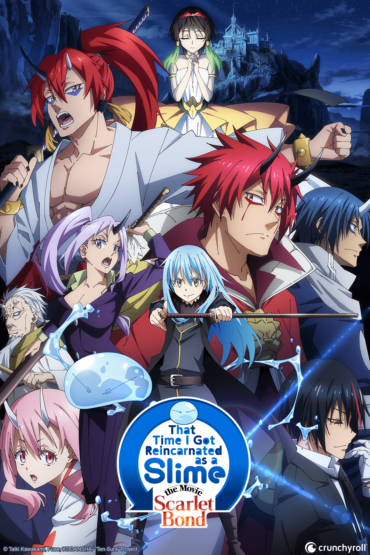 Title
That Time I Got Reincarnated as a Slime The Movie: Scarlet Bond