Due to the huge success of the Sibyl System, a surveillance and biological monitoring system that gauges the likelihood that individuals will commit a crime before they do so, Japan has begun the process of exporting the technology in the hope that one day Sibyl will be in use all around the world. The first country to receive the system as a test bed is the war-torn state of the South East Asian Union (SEAUn) in the hope of restoring peace and stability to the town of Shambala Float. However, when a group of anti-Sibyl rebels arrive in Japan, the Ministry of Welfare’s Public Defence Bureau discovers evidence that former enforcer Shinya Kougami is working with guerillas. Inspector Akane Tsunemori is sent to SEAUn to bring him back. 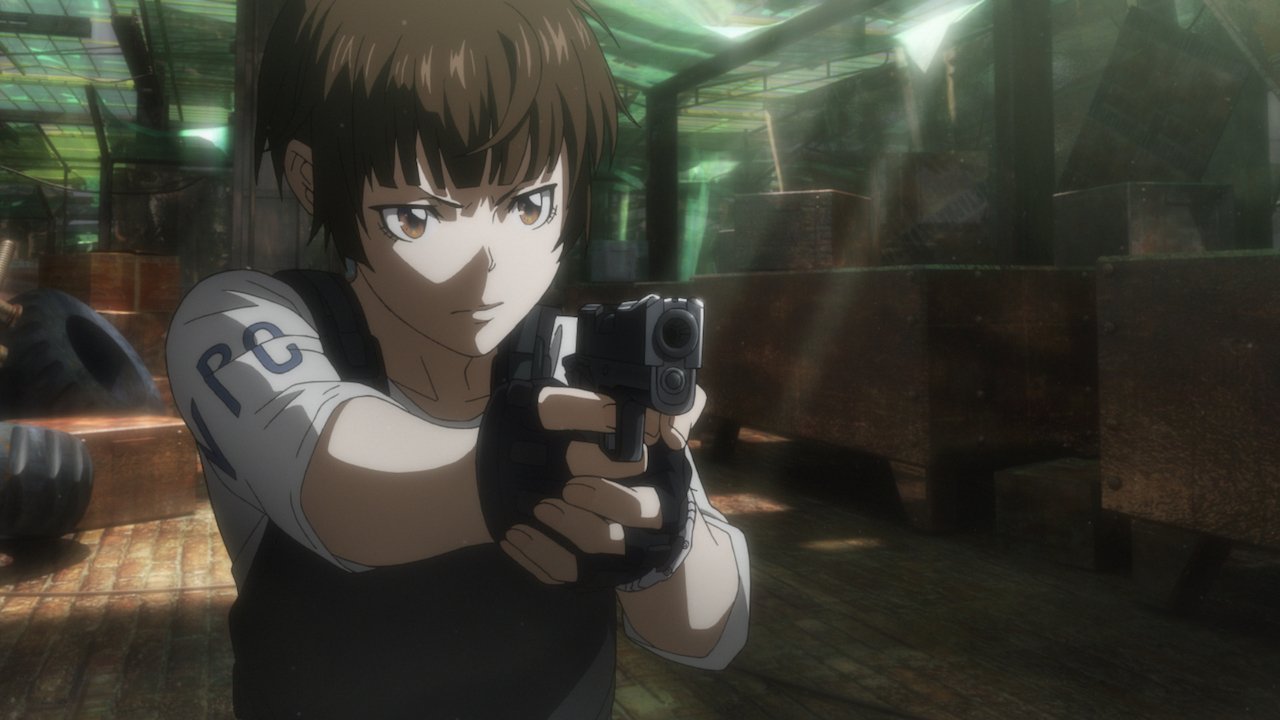 After the somewhat disappointing follow up to the original series in Psycho-Pass 2, original series creator and writer Gen Urobuchi (Madoka Magica, Fate/Zero) reteams with Production IG (Ghost in the Shell, FLCL, Eden of the East) to deliver a worthy successor to the first season.

Whilst I don’t think season two of Psycho-Pass is awful, probably the most disappointing thing about it was how it didn’t follow up on the cliffhanger ending of the original series. Given that the first season definitely teased a follow-up with the after credits scene of Kougami on a boat of some kind, you couldn’t help but feel that season two was jogging in place a little, a fact that certainly wasn’t helped by the fact it was lacking both the original studio and the original writer. However, with all the talent back on board this movie finally delivers on the promise of that cliffhanger, as this movie it completely centered on what happened to Kougami after the events of season 1. Psycho-Pass 2 isn’t completely ignored, with characters from the sequel making brief appearances at the beginning and end. However, this does feel like it was written as a direct follow up to the original, and I think you could probably go straight from season one to this film without missing anything, which only makes season two feel a little bit more illegitimate than it already did. 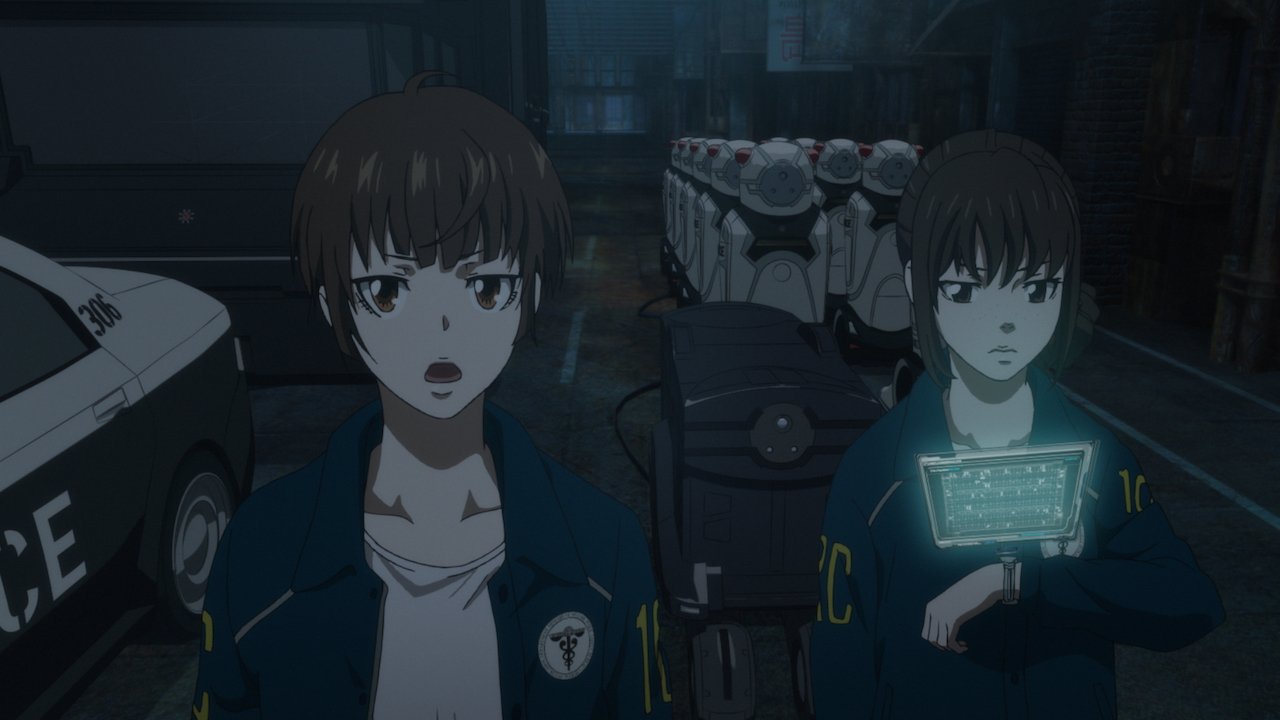 The biggest difference between both previous series of Psycho-Pass and the movie is that the movie is no longer really a detective show. You won’t find any grand mystery to unravel here or any kind of serial killer terrorists; instead it feels more like a traditional sci-fi action anime, with a whole lot more action sequences than either of its predecessors, and honestly, I think this was a change for the best. Given that the original show was 22 episodes long it had a lot of time to set up and execute its mystery, and the 11-episode follow-up felt really rushed in its second half, if they did try and pull off a similar mystery story it would have felt even more rushed than even the second season, and more than likely would have turned out messy. With that in mind, I actually really quite like the plot, despite its more simplistic approach. The idea of Sibyl expanding globally to gain more control feels like a natural progression of the story from previous seasons and seeing how other countries would react to such a system being implemented is interesting. 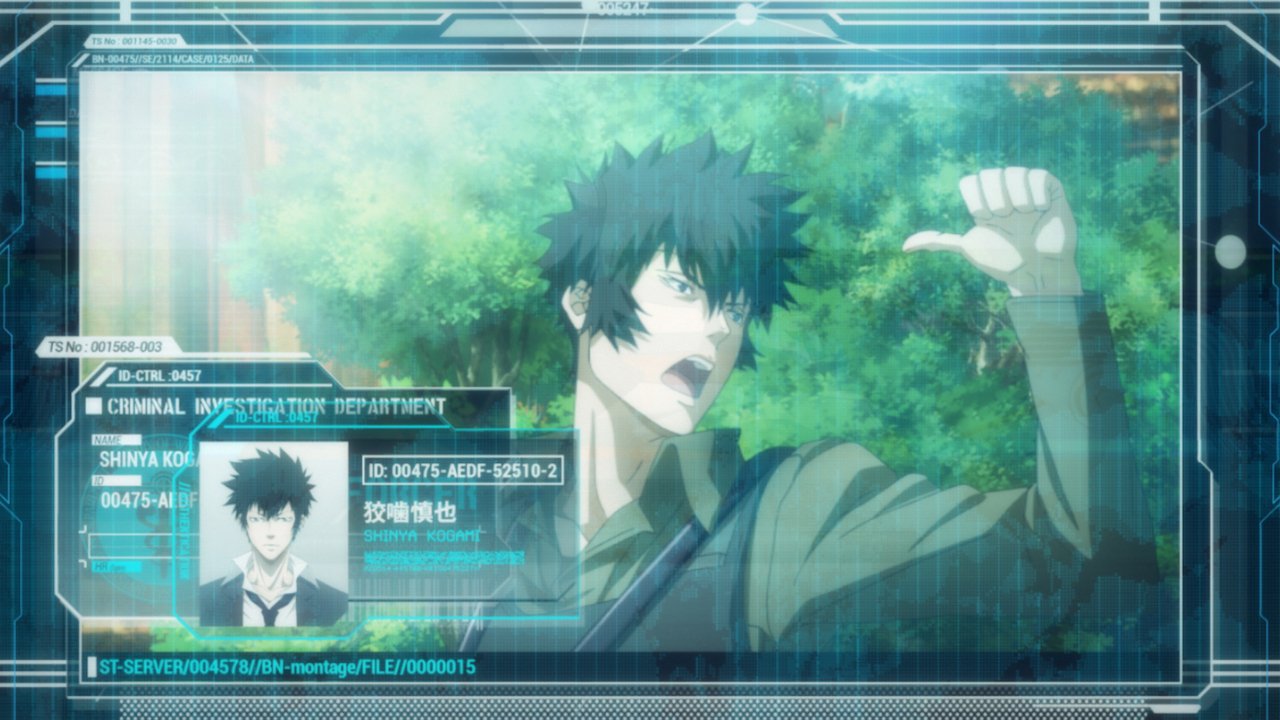 With the film having a more simplistic story you’d think this would allow for a bigger focus on the characters, so I can’t help but feel a little bit underwhelmed by that aspect. I’m not entirely sure what I was expecting, but the reunion between Akane and Kougami felt very underplayed, and somewhat disappointing considering that it was one of the biggest selling points of this movie, at least to me. In general, I felt that characters were lacking in growth or development, although given it’s a film and limited on time, I was kind of expecting that anyway, and I don’t think it really harmed my enjoyment. Something I would have liked to have seen, however, is more of the supporting cast. Given that Akane is shipped off to another country about 15 minutes in, the recurring cast of the other seasons are reduced down to cameo appearances, with only about 20 odd minutes of screentime between them. With Kougami back in the picture, it would have been nice to see how both the old cast from season 1 and the new cast from season 2 react to him. 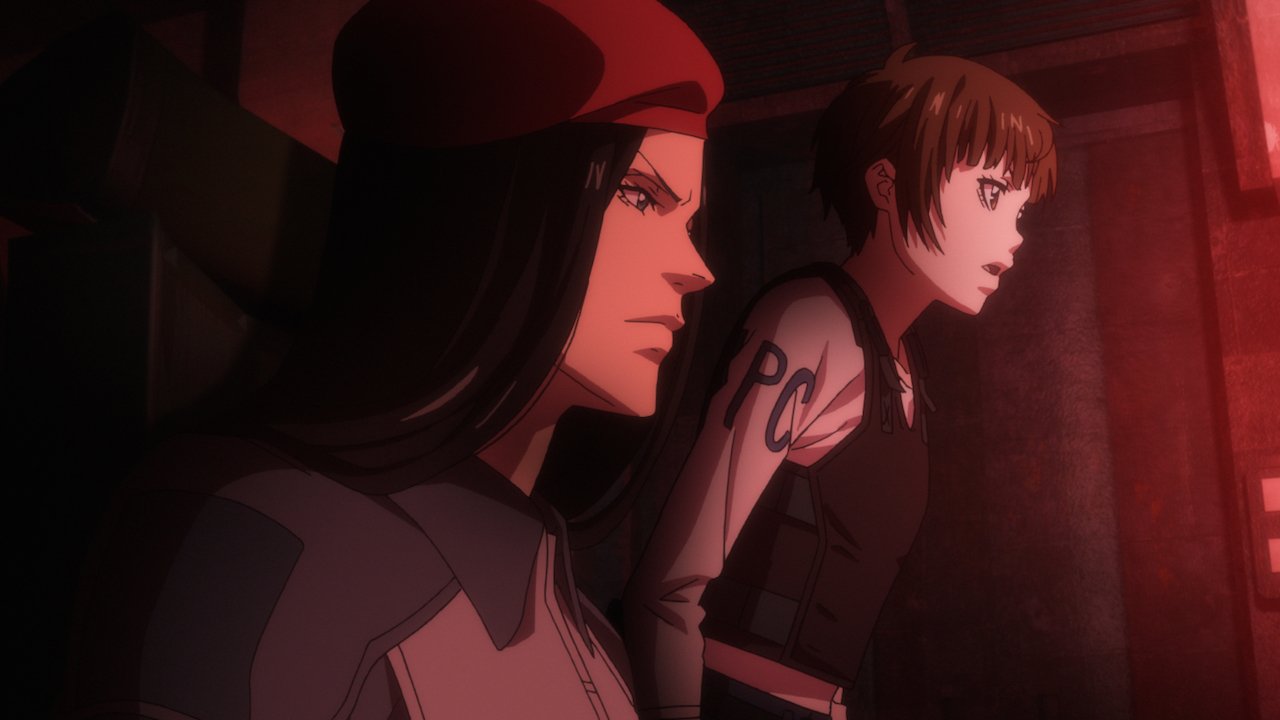 Along with the return of Urobuchi, it’s also great to see Production IG back at the helm of Psycho-Pass The Movie. Not that Tatsunoko did a bad job with season 2, but the quality of IG’s animation is undeniable, and whilst Tatsunoko replicated the visual identity of the first series, this film has a unique look of its own. Since the story takes place outside of Japan for the first time, we get to see the what a country not under the control of Sibyl looks like. This allows IG to mix the slick sci-fi visuals from previous entries with the more run down environment of a war-torn country, including a lot of scenes taking place in abandoned capital city, which is in stark contrast to Season 1.

Including both a 5.1 English audio track and a 5.1 Japanese audio track with English subtitles, both the English and Japanese cast return to reprise their roles from earlier seasons. As per usual for Funimation, the quality of the dub is excellent with not a bad voice actor among the bunch. Everyone delivers fantastic performances, with Kate Oxley (Darker Than Black, My Hero Academia, Fullmetal Alchemist) and Robert McCollum (Barakamon, Dragon Ball Z, Attack on Titan) taking center stage as Akane and Kougami respectively. The band Ling Tosite Sigure contribute their third opening song for the franchise, “Who What Who What”; probably the least memorable OP they’ve done out of the three but isn’t bad, and the first ending theme from Psycho Pass, “A Best Without a Name” comes back as the film’s credits song, which is a nice call back. 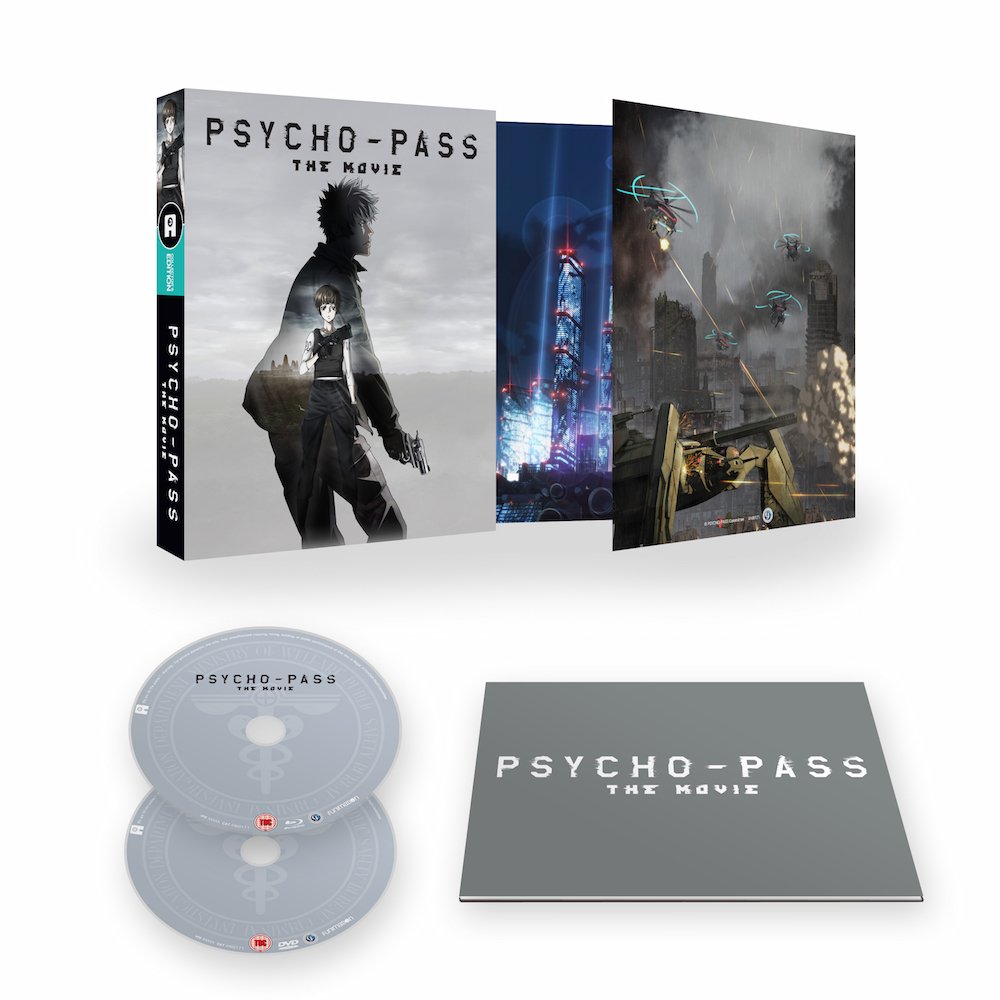 As for extras, the limited edition release by Anime Limited includes a rigid box, digipak and artbook, as well as both a Blu-ray and DVD copy of the film. On-disc extras include trailers, ad spots and a commentary track from the dub cast.

It isn’t quite as good as the original Psycho Pass, but it’s still a brilliantly entertaining film and a great return to form for the franchise, finally resolving the cliffhanger ending of season 1 and expanding the world in an interesting way. 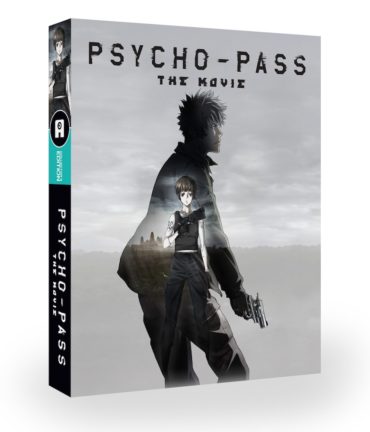