Expelled From Paradise is an original feature film created by Gen Urobuchi (of Madoka Magica, Fate/Zero and Aldnoah.Zero fame) and directed by Seiji Mizushima (of Fullmetal Alchemist and Gundam 00 fame). It’s simply one of those films not based on anything other than a company (or two, in this case: Toei Animation and Nitroplus) deciding to hire some talent to make one.

Set in a good old fashioned post-apocalyptic future, most of mankind now lives on a spacestation named DEVA, where just a few months after being born they are digitised and live out their lives in a computer-generated paradise… well, sort of. Each person has an allocated amount of “memory” that they can use to learn and experience things, and the harder you work, the more you get, and if you slack off you’re “put in storage”, or effectively imprisoned. Still, DEVA agent Angela Balzac is happy with her lot in life, so when a hacker starts breaking into the simulated lives of the DEVA citizens and talking about traveling to the stars with them, Angela is happy to be given the task to track the culprit down. Sadly for her, that involves getting a “simulated flesh body” and being sent down to the actual Earth, as the hacker appears to be operating from down there. She meets up with the rather cool and laid back “Dingo” (that’s a codename), an informant working on Earth in order to get more money and food for the starving 2% who were left on the planet.

Cue lots of Angela experiencing things for the first time, “dusty air”, heavy gravity and eventually a simple fever/cold, which is upsetting for her, having never gotten ill in the computer paradise. This all leads to the discovery of “Frontier Setter”, the hacker in question, and a good discussion on what being human really is, whether Angela’s paradise is really a prison, and how the struggling people of Earth are more alive than they’ll ever be. I won’t spoil any more, but it really is well done; it makes you think and still enjoy what you see. There are a few action scenes towards the end involving some mech-like suits, but really that almost seemed unnecessary given how the plot moves.

As you probably will have guessed (given that it’s a film) the animation is top-notch, fluid and bright; even a few CG sweeping shots are so well blended that you have a hard time telling when it’s switching between the two styles. The voice work for both languages is great, with the English voice track featuring Steve Blum pretty much reviving his role as Spike Spiegel from Cowboy Bebop in order to voice Dingo. The extras are a “making of” feature (available in Japanese with English subtitles) and some trailers.

So, an overall look at Expelled From Paradise. It looks great, sounds great, and although some story arcs go as predicted – Angela, for example, being the Eve and having to get used to living in the real world after being… well, expelled from paradise, has a pretty obvious character arc – in a lot of ways the story will surprise you, or just generally makes you think about what it means to be human without being too preachy or on-the-nose. The post credits scene will leave you with a smile, even if it is quite sad.

Expelled From Paradise is a perfectly fine way to spend an hour and forty-ish minutes. It’s one of those films that as the end credits roll up you look at the clock and realise that time really has flown by that quickly. 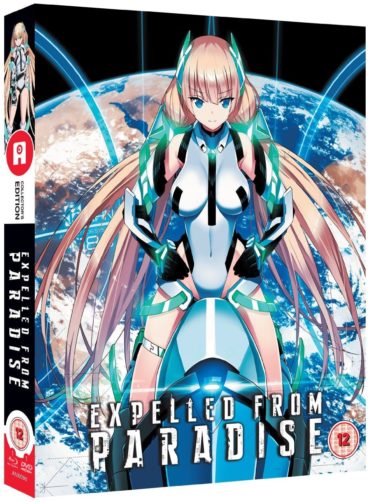