It’s official! Your Name (Kimi no Na wa.), the latest film from director Makoto Shinkai, has now become the highest grossing film for 2016 in Japan alone. The film has not only surpassed Kyoto Animation’s latest film A Silent Voice (Koe no Katachi) but also Hideaki Anno’s Shin Godzilla (Shin Gojira), the latest live-action film in the Godzilla franchise.

It’s also worth noting that the film has now surpassed the 10 Billion Yen mark faster than Disney’s Frozen movie which at the time was the biggest animated film to come around in recent years (it even sold 2 million Blu-ray units alone).

Your Name. has officially sold out at both BFI London Film Festival and Scotland Loves Anime 2016 but you can still check out the film at the cinema when it reaches nationwide across the United Kingdom on November 24th thanks to distributor Anime Limited, who also have the home video rights. Tickets are still available for many select theaters, here’s the official Your Name. UK website to find out more.

Your Name is the story of a teenage boy and girl who have
never met, but who start to magically swap minds and live
each other’s lives. Mitsuha, a teenage girl student, lives in a
small mountain town, but longs for the bright lights of Tokyo far away. Then she is astonished to wake one morning in the body of Taki, a teenage Tokyo schoolboy – who in turn wakes up in Mitsuha’s body!

Switching back and forth between two lives, locations and
genders, Mitsuha and Taki must cope with their fantastic
shared situation. At first they are outraged and mortified by
what’s happening, but soon they start enjoying their double
lives, though they never meet directly. Eventually, though,
one of the youngsters will learn the devastating truth behind what’s happening…

Anime UK News’ very own Darkstorm will have a review up on this film coming soon! 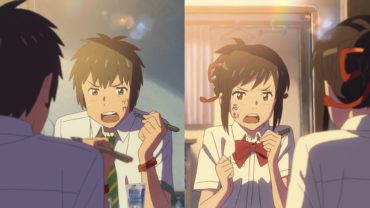