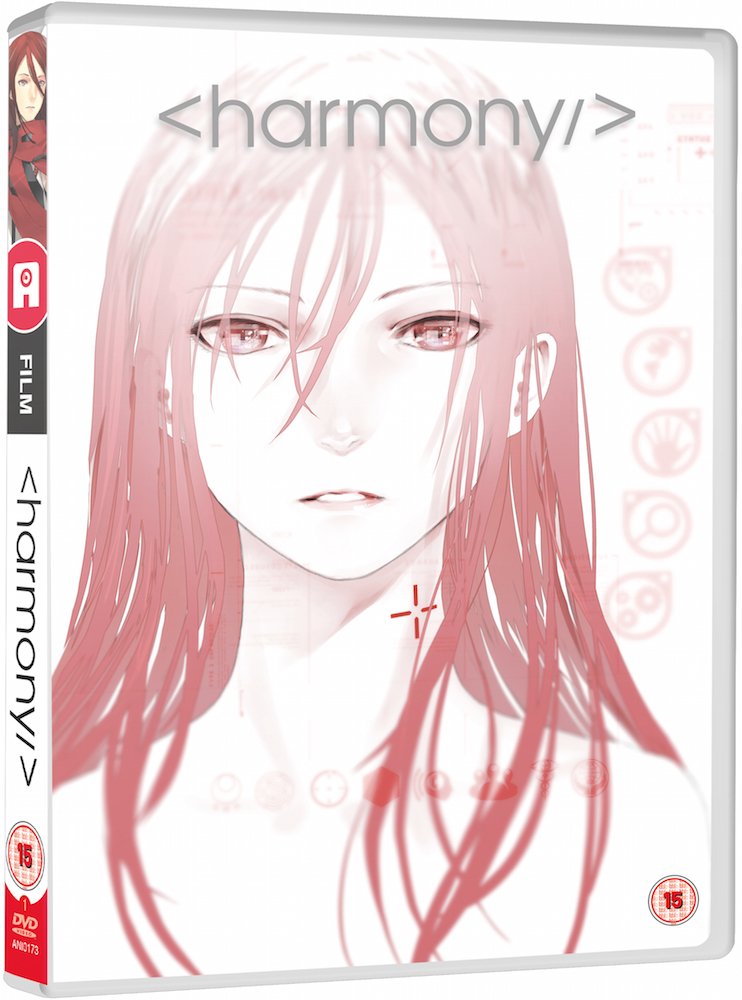 In the future, after a nuclear war and disease have destroyed most of the world; Japan has adopted a new modern way of living called ‘lifeism’. The aim is to preserve life at all costs via implants and software that takes control of people’s bodies, from their diets to exercise to medication. On the surface, it looks like a peaceful utopia, however underneath it all three teenage girls, Tuan, Miach and Cian, plan to commit suicide to rebel against the life that is forced upon them. Miach is the only one who dies, with Tuan continuing to live life jaded with it all and growing up to work for the very company she once strived to rebel against. It’s now many years later after her suicide attempt and the cracks of the perfect new world are starting to show, with it all somehow being centred on her former friend and their shared idealism.

The world within Harmony is fascinating yet startling; imagine living in a world free of diseases such as cancer and the common cold with extremely long life spans, but in exchange you’re taking pills given to you by a machine and your eyes are constantly seeing messages ranging from general health updates (low blood sugar for example) to warning you of the potential dangers of not washing your hands properly or climbing ladders incorrectly. You see the folks in the world of Harmony constantly glass-eyed and happy with everything around them yet they’re ultimately hollow and not really ‘living’, the fact that a bottle of merlot is considered contraband and everyone appears to be the exact same weight show a world free of both the highs and lows of living life. Then there’s the subject of words and books, things we physically leave behind. In this new world it’s all digital, so if you die will there be anything of you left for others to see or physically hold? Many would consider that world not truly living at all, and it’s these themes that Harmony seeks to explore via our heroine, stuck between a world she once wanted and a world in which she is forced to walk. 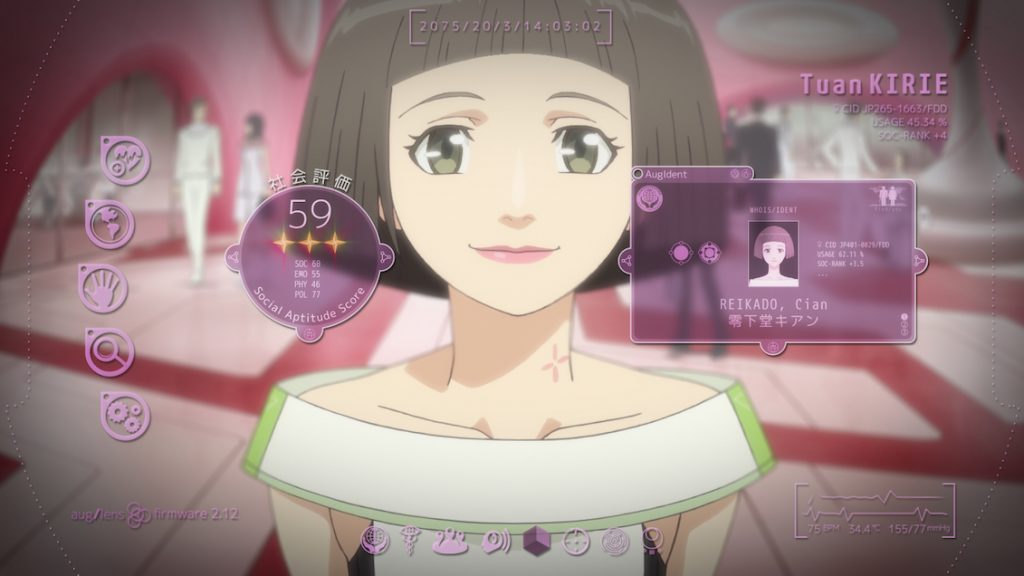 Unfortunately, good ideas and interesting themes aren’t worth filtering through if the writing isn’t decent. Tuan monologues a lot throughout the film, especially in the first half an hour where the film slogs through setting up the three girls’ relationship, their suicide pack and why they felt the need to do so against the backdrop of their world. The script constantly repeats itself; so be prepared to hear ‘killing us with kindness’ several times across the movie and ‘the friend who once wanted to die with me’ is how Tuan describes her still-living friend twice within the same scene like we’ve forgotten mere seconds later. It doesn’t help that Tuan speaks in a way that’s incredibly patronizing and pretentious. She’s easy on the eyes, and seems at first to be a go-getter action girl, but this then falls apart with the actual plot. The ‘mystery’ of the movie and the whole finale it builds up to feels incredibly shallow, very slow in getting there and once it does, it’s predictable; you’ll figure out who the mastermind is before it’s said out loud. Tuan’s journey to uncover what happened and how it all adds up just becomes a running monotony of travelling from one person to another, from one exposition speech to the next, with little to no friction at all. The most interesting parts of the story such as the world building, the ‘master plan’ and the result of the villain’s threats either happen off screen or don’t affect the main character directly at all. We don’t even see how the final efforts of Tuan’s actions play out on screen, only a repeat of the opening shot.

It doesn’t help that there are only two action scenes in the entire movie; one opening up the film and another 40 minutes before the end, so the last one doesn’t even serve as a fulfilling climax. A movie doesn’t need to be full to the brim of action to be enjoyable, but you need to keep the audience engaged to make the dialogue-heavy meat of the film interesting, which sadly Harmony fails to do more often than not. There are a few striking scenes, such as the abrupt end to Tuan and Cian’s lunch and Tuan watching tapes of the victim’s final moments when starting her investigation. But on the other end of the spectrum we have a scene where the ‘big bad’ is threatening the world via a distorted recording to do what they say unless the public wish to perish, and the whole scene is just the text ‘VOICE ONLY’ zoomed into incredibly slowly and then back to full screen again. The scene lasts only three minutes but feels far longer as it’s very boring, going completely against the terror we’re meant to feel whilst listening to the villain’s demands. To summarise, Harmony suffers from a bad case of ‘tell, don’t show’. Which wouldn’t be so awful if the writing was at least tolerable. 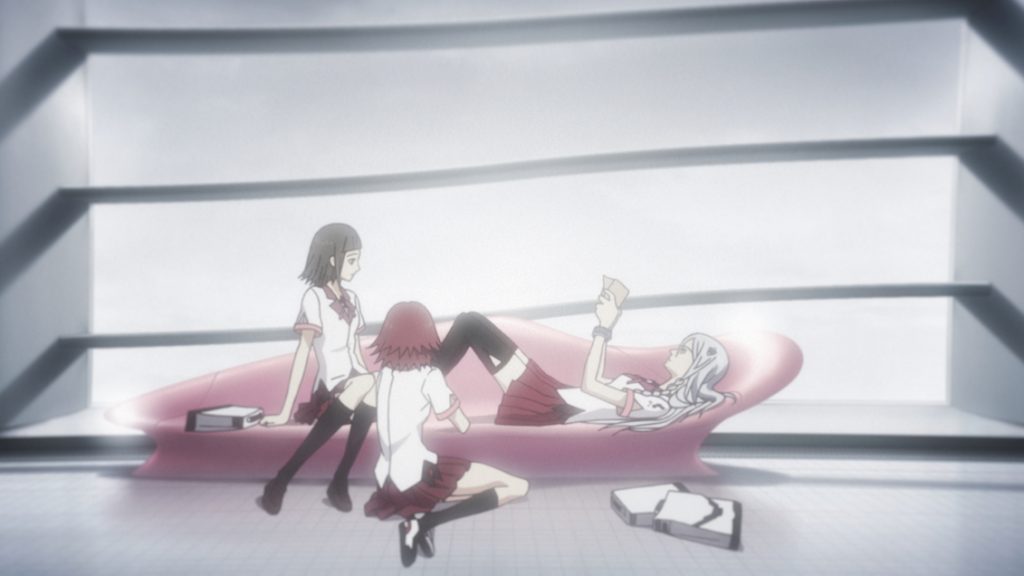 The movie also has many odd scenes where it experiments with its animation budget with excessive use of 3D, mostly via the World Health Organization meetings (which look like a cross between the SEELE meetings from Evangelion and Organsation XIII from the Kingdom Hearts series) but also in odd 360-degree pans of scenery that is not that interesting to begin with to fill out exposition-heavy scenes. The animation doesn’t look as bad in the flat, 2D scenes such as the lovely location shots in the latter half of the movie but for the majority of the time we’re stuck with bland scenery and character designs we’ve seen in other bigger and better films.

The DVD only comes with trailers as its extras; the Blu-ray collector’s edition comes with special packaging, art cards and a booklet.

Harmony has interesting ideas but is ultimately a depressingly boring movie, both in terms of how the story and themes pan out and on a technical level. There are good ideas in there, mainly stemming from the book it’s based on (which you can purchase via amazon) but the film itself is a struggle to get through and find fulfilling. Avoid unless you’re a massive Project Itoh fan.

From Ayumu Watanabe, the director behind Children of the Sea, and Studio 4°C comes the new film Fortune Favors Lady Nikuko which follows the life of a single mother and her daughter.