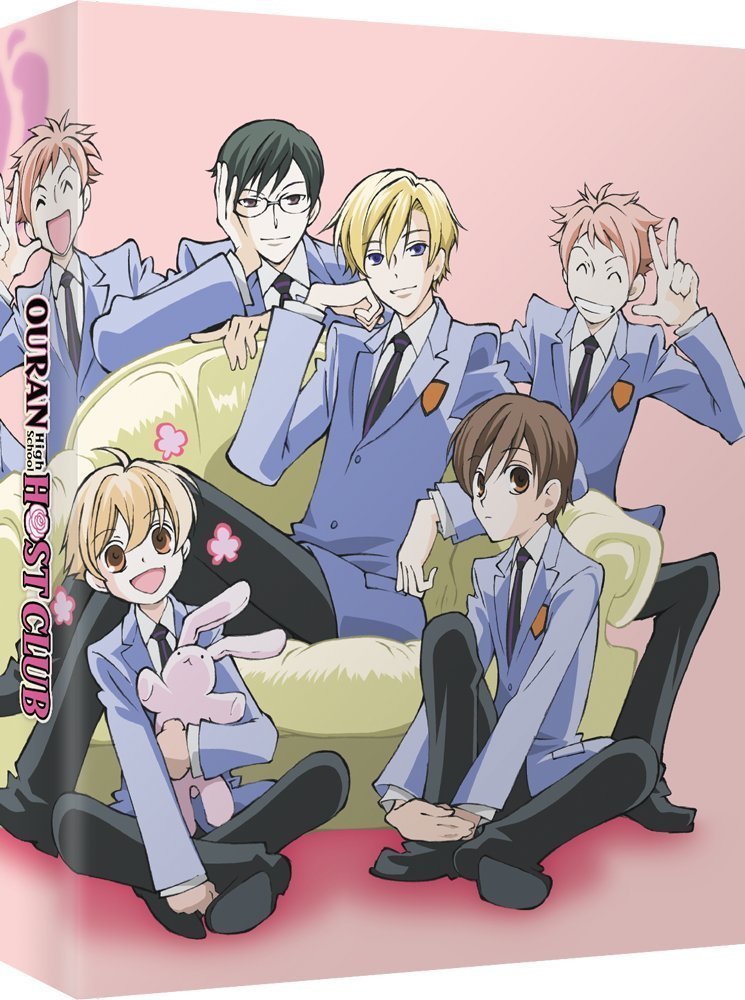 *** This is an edited/revised version of our original reviews of Ouran High School Host Club which deals with the content of the series: story; script; music etc. posted to celebrate the new Collector’s Edition (as yet unseen) from Anime Limited.***

Studious Haruhi Fujioka has won a scholarship to the prestigious Ouran Academy which caters for the sons and daughters of elite Japanese families. Desperately searching for somewhere quiet to study, Haruhi stumbles upon Music Room 3 – and the dazzlingly good-looking members of the Ouran Host Club. Inadvertently breaking a horrendously valuable vase, Haruhi is told that the only way to pay the Host Club back is to become a host and entertain the young ladies of the Academy. There’s one slight flaw in the plan which Tamaki Suou, the ‘king’ of the Host Club, hasn’t quite realized: Haruhi is a girl. But when was gender confusion ever an impediment to a good story in anime and manga? One thing is certain: Haruhi’s presence will change the lives of the six privileged young men and maybe her own, too – and, in the process, afford viewers many hours of genuinely engaging and amusing entertainment. 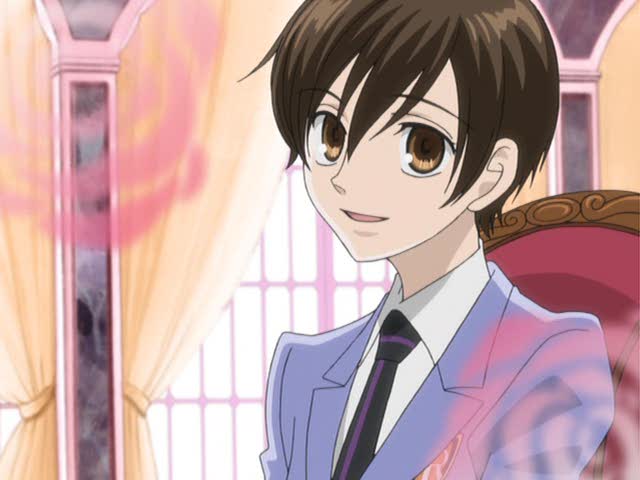 Based on Bisco Hatori’s witty 18-volume manga, Ouran takes shoujo manga stereotypes and wickedly satirizes the hell out of them. So we have the inevitable swimming pool episode, the beach episode (swimsuits and muscles galore!), the high school ball at which the best female dancer will receive a kiss from Tamaki, and even an ‘Alice in Wonderland’ dream-fantasy. Add in plenty of themed cosplay, so that the boys can charm the young ladies of Ouran Academy with their good looks and romantic compliments, and you have all the ingredients for an engaging watch that charms as well as amuses the viewer. 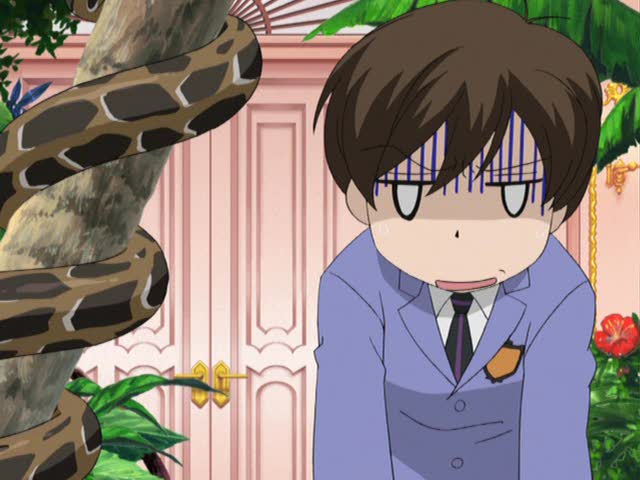 Ouran is, above all, the story of a likeable – yet very atypical – heroine, whose off-screen comments on the antics of her fellow hosts is often a weary, ‘Oh, good grief.’ As well as the magnanimous (yet oh-so easily wounded) Tamaki (the one who dreamed up the idea of running a Host Club), there is cool, calculating Kyoya Otori who looks after the finances. Then there are the identical twins Kaoru and Hikaru (first years, like Haruhi) who like nothing more than to cause mischief – and the tiniest seventeen-year-old ever encountered in anime, the blonde, cake-loving, bunny-hugging Hunny (little pink flowers dot the screen whenever he appears) with his constant companion, the strong, silent Mori. In fact, true to its shoujo roots, Ouran is bursting with flower imagery: from red roses and cherry blossom, to the white lilies that appear when Haruhi encounters the forceful girls of the Zuka Club at the all girls’ school, Saint Lobelia’s Academy. But it takes Renge, a raving otaku who jets in from Paris to claim Kyoya as her fiancé (because he resembles her favourite character in a dating sim) to first label each of the Host Club members. Kyoya is the megane, Hunny is the Boy-Lolita type, the twins play up to the girls’ fujoshi tendencies by acting out steamy twincest moments, etc. etc. 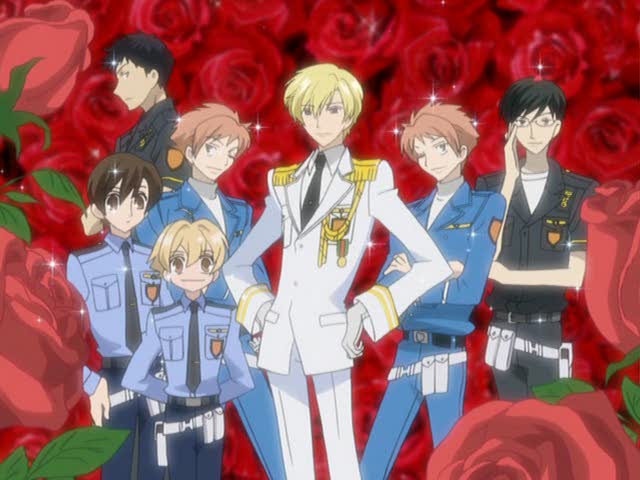 Another target for satire is the wealthy students’ utter lack of knowledge about ordinary life. When sent to buy coffee, Haruhi astounds them all by returning with a jar of instant ‘Hescafe’: a complete novelty. “Isn’t that where the beans have already been ground?” enquires one customer innocently. And the boys constantly refer to Haruhi – in her hearing – as a commoner, without even realizing that this might be construed as hurtful or insulting. 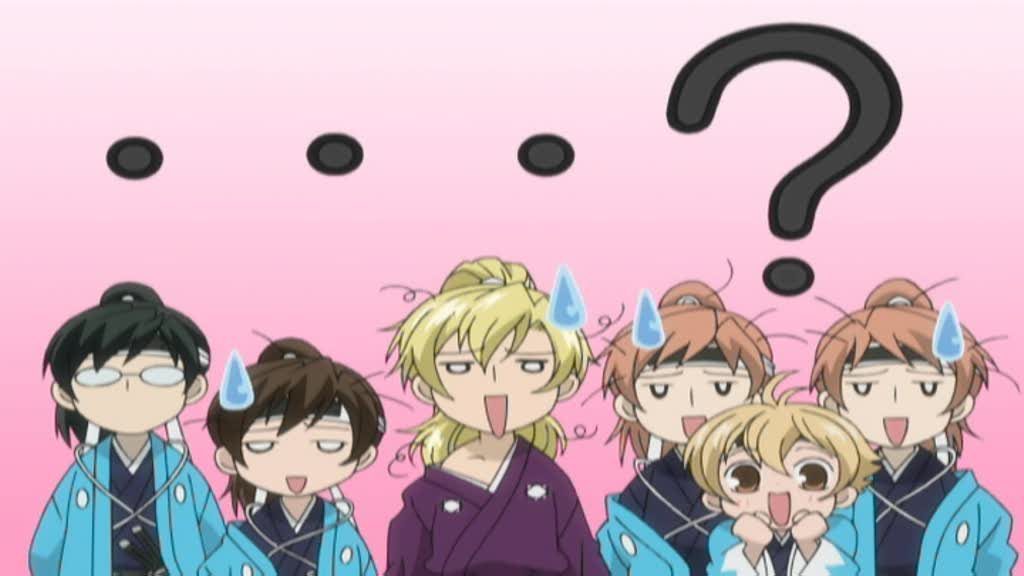 If Ouran were just a series of parodies, its freshness would soon pall. However Bisco Hatori, whilst having fun at the characters’ expense (especially poor Tamaki, whose grandiose ideals are so often deflated) also invests them with believable and sympathetic back stories. So we gradually get to learn more about what makes them all tick. Haruhi learns from one of the girls that the twins have changed since he/she joined the Host Club. “Because of you, the twins are having fun.” And she, the hardworking honours student, also begins to open up and enjoy herself. Perhaps, as the opening song suggests, there may even be the possibility of falling in love? Tamaki is certainly very smitten with Haruhi – although, being Tamaki, he confuses his feelings of romantic attraction with those of a father for his daughter. Suddenly the ‘king’ of the Host Club starts acting very paternally towards the newest member, trying to protect her from prying eyes and amorous advances. The independent and self-contained Haruhi finds this behaviour extremely irritating indeed; she already has a father! (And thereby lies another tale, as the Host Club soon find out…) 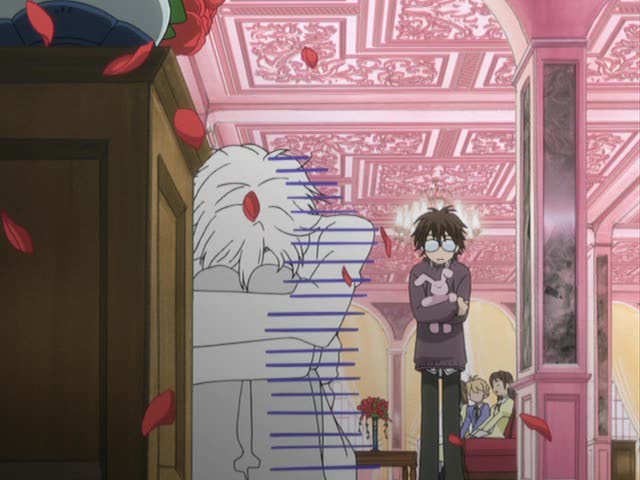 Faithful to the manga, both in content and in Kumiko Takahasi’s character designs, Ouran looks superb. We get frequent amusing glimpses inside ‘The Theatre of Tamaki’s Mind’ and manga-style captions and thought bubbles often give insights into what’s really going on in the characters’ heads. The prestige Ouran Academy itself is a grandiose vision of pastel-coloured architecture based on famous European buildings (the clock tower looks uncannily like Big Ben) and its lofty halls are filled with crystal chandeliers. 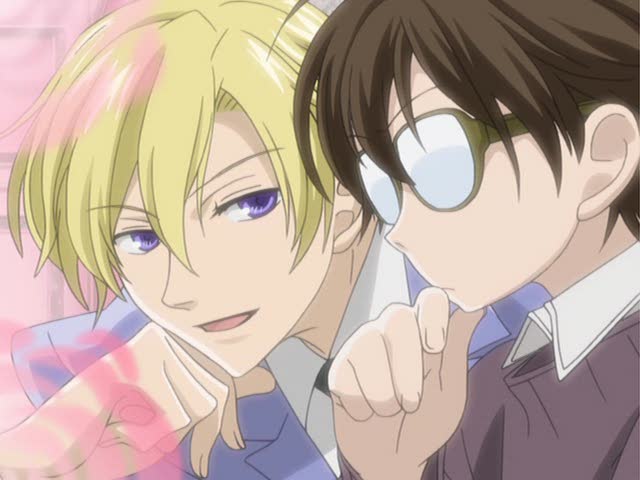 As well as looking good, Ouran sounds wonderful, with excellent casts in both the US dub and the original Japanese version. Caitlin Glass makes a believable and likeable Haruhi, although Maaya Sakamoto makes her a little sweeter and less world-weary in tone. Both Mamoru Miyano and Vic Mignogna excel as Tamaki, delightfully conveying his volatile shifts of mood, one moment capricious and full of himself, the next insecure and wounded, sulking in a corner. Add to this an inventive and tuneful orchestral score that makes use of the catchy opening song ‘Sakura Kiss’ to great effect (if you recognize one of the more dramatic themes, it’s because composer Yoshihisa Hirano was also responsible for the score for Death Note.) 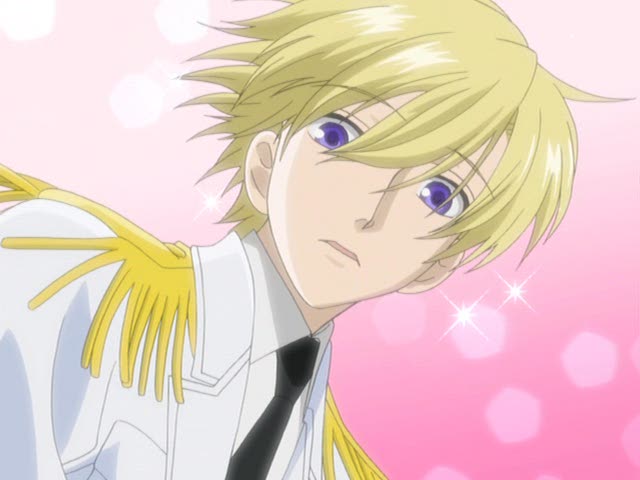 In 2006 when the anime series was made, Bisco Hatori had not finished the manga, so the ending here differs and is in some ways less satisfying than the mangaka’s more developed conclusion. But this shouldn’t in any way detract from the viewer’s enjoyment. 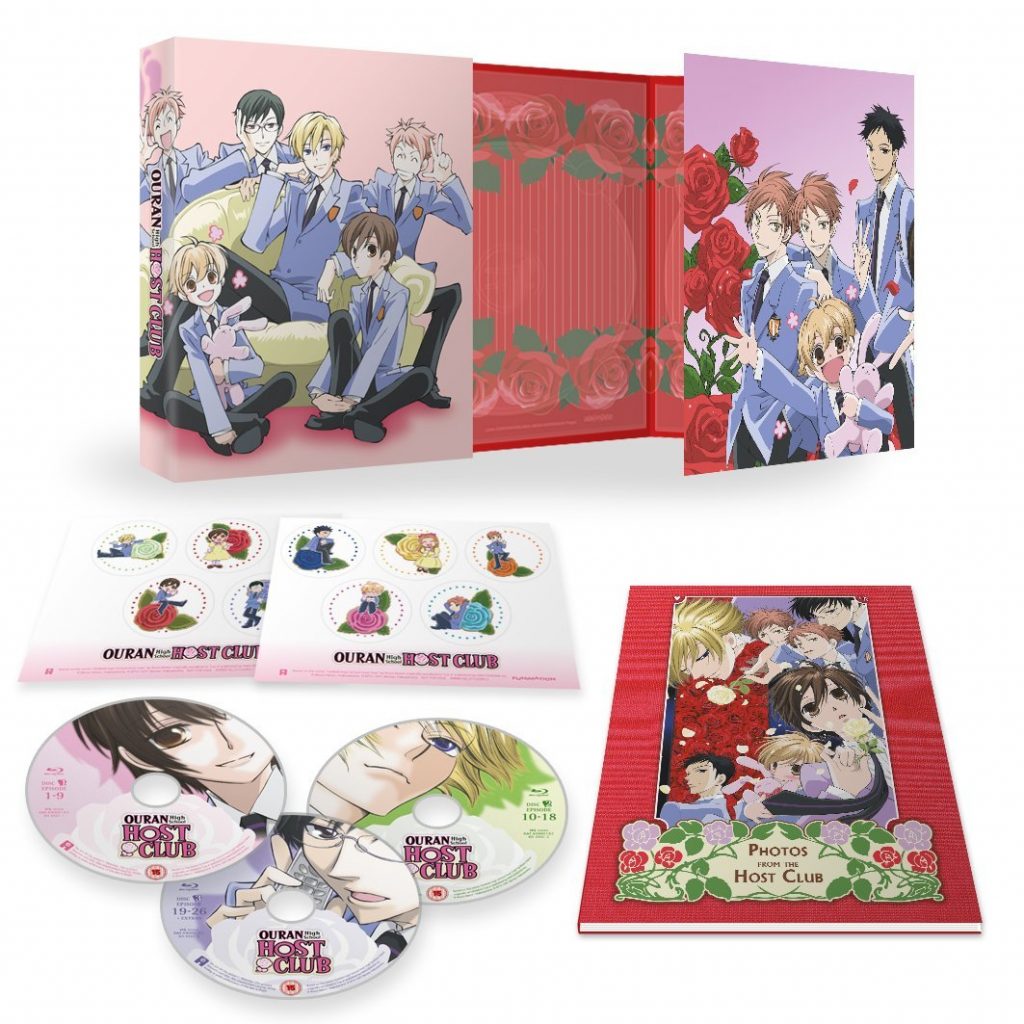 We should point out here that, even though we’ve yet to see this brand-new Collector’s Edition, Anime Limited have confirmed that they have used the new Funimation Blu-ray materials and there should be no issues of image stretching as encountered by some viewers with the original DVD release back in 2008.

Ouran High School Host Club might be based on a shoujo manga, but it should appeal to any anime viewer, male or female, who’s looking for a light-hearted comedy with a wicked sense of humour and sympathetically drawn characters. The ideal series for sharing, maybe? Highly recommended.