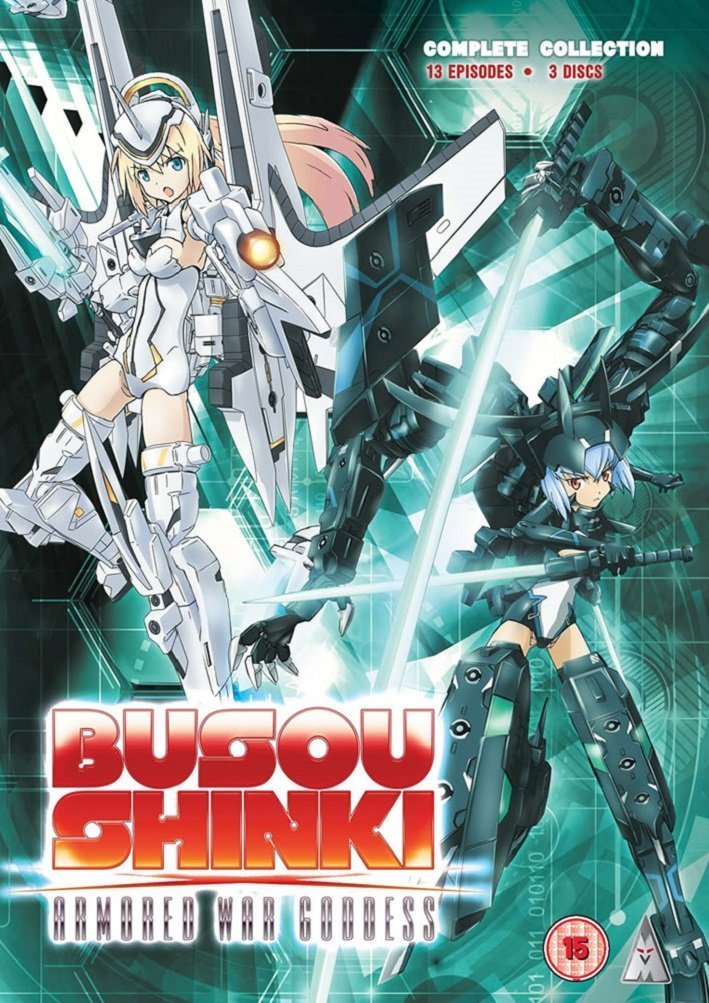 There is a saying that goes around about slice-of-life anime and how it’s often ‘cute girls doing cute things’. For this review of Busou Shinki I’ve decided to repurpose that saying to ‘cute robot girls doing cute robot girl things’ because while it looks like this series should be an action series (and you’d be forgiven for thinking this, judging by the cover art), it’s actually more of a slice-of-life tale.

The anime is based on telling stories about the Busou Shinki toys, which you can buy in Japan. These Shinki toys are small action figures which are always female and generally have the ability to transform into more mecha-like forms if the situation demands it. Despite being robots, in the anime the Shinki have a wide range of emotions and are generally always looking to make their owner, their ‘master’, happy.

In the Busou Shinki anime we’re introduced to four Shinki who all belong to high school freshman Rihito (last name is never given). These four – Ann, Ines, Hina and Lene – peacefully live out their day-to-day lives while looking after Rihito. The anime follows their adventures as they deal with the mishaps of daily life, such as Rihito forgetting an umbrella or his lunch. I wish I could say that there is an overarching story or an actual plot to be found, but sadly there isn’t. The series is very episodic. Apart from the first two episodes and the final two you could watch the show in any order and not really have any problems doing such.

It’s because of this episodic nature and the lack of a plot that I struggle to really recommend Busou Shinki. Admittedly I’m not someone who enjoys a series without an end goal of some kind, but even putting those feelings aside and looking at Busou Shinki objectively, it’s just boring. The series implies that Shinki can be, and usually are, used to battle one another in competitions, but because Rihito is against that kind of thing, we never see competitive battling in the anime. Had this kind of thing been included, I’d probably have been far more interested, especially as the action scenes that the anime delivers are often far more attention-grabbing than anything else it has to offer.

On the whole I don’t really know what Busou Shinki wanted to be. It’s clearly one big advertisement for the toys but beyond that it’s too boring to be a good slice-of-life, not funny enough to be a comedy, and the action is so sparse that labeling it an action series doesn’t really stick. If you really like the idea of robot girls looking after a master then perhaps you’d get something out of their daily adventures, but I think that audience is fairly limited. Ultimately it stands that the only thing Busou Shinki really has going for it is to be a moderately okay animated advert.

Speaking of animation, the series has been handled by studio 8bit, who are perhaps best known for their adaptations of Shonen Maid and Absolute Duo. Where Busou Shinki is concerned it’s difficult to get excited for the animation. There is a little bit of dodgy CGI, and even beyond that the colors are quite muted and limited for a show that was only released in Japan in late 2012. It’s not poorly animated but I’m not so sure that the quality is anything to write home about either. It’s firmly in the camp of being okay and nothing more or less. Also, it has to be said that although the Shinki are meant to be robots with the ability to transform, their designs are all fairly generic and not at all as interesting as the series would try and have you believe.

The music for Busou Shinki has been handled by Tetsuro Oda and on the whole is rather forgettable. The opening theme is “Install x Dream”, which is sung by the four main Shinki voice actors, while the ending theme is “The Sun’s Sign” by Azusa. Neither song will stick in your mind for long, perhaps like the anime itself. While there is nothing wrong with the voice actors for the series, they’re playing such stereotypical and bland characters that it’s equally hard to say anything notably pleasing about them.

This series has been brought to the UK thanks to MVM Entertainment, who have released it on both DVD and Blu-ray. The release is split across 3 discs on DVD and 2 for the BD and contains all 12 episodes of Busou Shinki as well as a 13th unaired episode. This release is sub-only as there is no English dub for the show and the only extras to speak of are clean opening and ending videos, as well as a selection of trailers.

Overall Busou Shinki isn’t a terrible series, it just suffers from being incredibly boring. I’m sure someone out there will get something out of it but a slice-of-life anime about robots that could be doing much cooler things (like battling) is just simply not for me. I walk away, not so much disappointed as wishing for my time back.