The Gatchaman team, a group of extraterrestrials and humans chosen to protect the earth, have defeated a powerful alien, Berg Katze. A year has passed since then and the CROWDS, the manifestation of the interactive technology developed by Rui Ninomiya to help in emergencies, have become part of daily life in Japan… 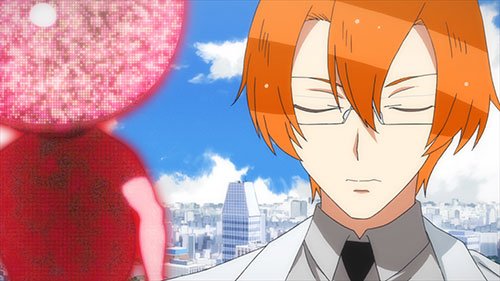 …until red CROWDS make a sudden appearance on the streets, attacking people – even the prime minister – and causing havoc in the name of VAPE (Violent Ape). And the main perpetrator? A young and cynical cyber-terrorist, Rizumu Suzuki, who is determined to challenge Rui Ninomiya’s fervent belief in the power of the human will to change the world for the better. It’s up to the Gatchaman to save the day and stop Suzuki – just as an alien spacecraft crash-lands in Japan! But no hordes of evil warriors emerge, just a solitary child, Gel Sadra, with scarlet skin and bright blue hair; he has come in peace – and one of the first humans he meets is idealistic high school girl, Tsubasa Misudachi. Tsubasa’s life changes in an instant; chosen as the latest Gatchaman on live TV, she soon finds herself representing Gel Sadra to the general public. Gel Sadra’s gift is to read the feelings of everyone around him; these manifest as smiley emoji/speech bubbles above people’s heads and their colours change, depending on their states of mind. 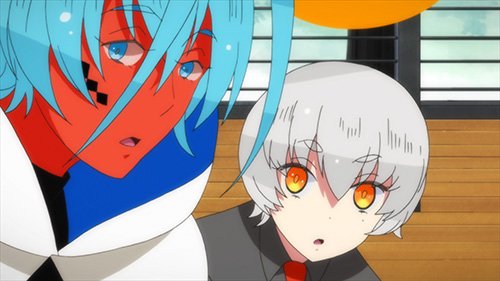 Soon Gel Sadra and Tsubasa are appearing regularly on Japan’s hottest TV show and are invited to address the Japanese government. The alien’s message of peace and love results in him becoming a candidate for the upcoming elections to rule the country as prime minister. The Gatchaman help to run the voting process; tablets are donated to every citizen and the voters are encouraged to submit their votes electronically. Who do the people of Japan elect? And who could foresee that the results of this election would lead to bitter divisions among the Gatchaman themselves?

And what has become of shape-stealer Berg Katze, the alien evil genius, who caused so much trouble earlier by facilitating Rui Ninomiya to unleash the CROWDS technology on our social media-obsessed society? Hajime, the hyperactively cheerful Gatchaman, has absorbed him and he’s now contained inside her, as foul-mouthed, cynical and furious as before – but also, thanks to Hajime’s social skills, an asset to the Gatchaman, especially when confronting imminent threats. And it turns out that he’s met Gel Sadra before and he really doesn’t like him… 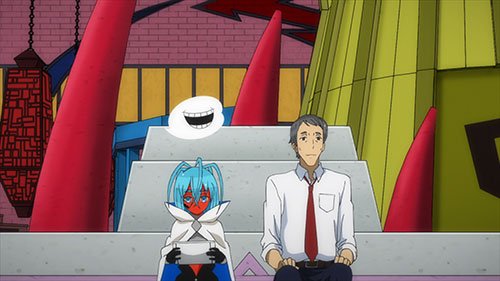 Social media and its influence for good – or bad – in contemporary society continues to be the main focus of the latest series in director Kenji Nakamura’s reinvention of the Gatchaman. The frailties of human nature and the tendency of groups to gang up on those who dare to express a different view to the majority (here, those who don’t embrace Gel Sadra’s vision of ‘Let’s all become one’) result in the cynical Suzuki’s predictions coming frighteningly true. Those who don’t conform are absorbed by the Kuu-sama, the physical manifestations of Gel Sadra’s will, born from the indigestible glut of feelings he has absorbed from the people around him. These lolloping smiley creatures seem dorky, reassuring and cuddly at first, but gradually metamorphose into instruments to impose uniformity; their lolling green tongues become increasingly long and menacing. The way the story builds suggests that it won’t be that easy to put everything back together in a Happy Ever After ending. Yet, maybe in the interests of wrapping the storyline up neatly or providing an upbeat finale, the creative team bottle out and don’t take events to their logical – and potentially horrifying – conclusion. But then, Gatchaman is above all a superhero story (as Paiman reminds us, the role of the Gatchaman is to save the planet!) and the dazzlingly bright colours of the animation reinforce this optimistic message. 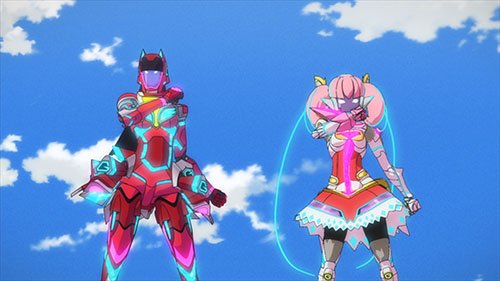 If you missed the first season, Gatchaman Crowds, don’t worry; the first of the thirteen episodes gives a brief dramatized summary to get you up to speed before plunging into the action.

Visually, insight is just as much a riot of colours as the first season; from the CG Gatchaman forms to the psychedelic interiors of the Gatchaman HQ, there’s never a dull moment and the standard of animation is consistently high. And there’s a colourfully varied cast of characters too; without having any obvious LGBTQ agenda, there’s a general acceptance of cross-dressing (Rui) and gender fluidity, even though this mostly equates to certain characters like O.D. being presented as ‘flamboyant’. 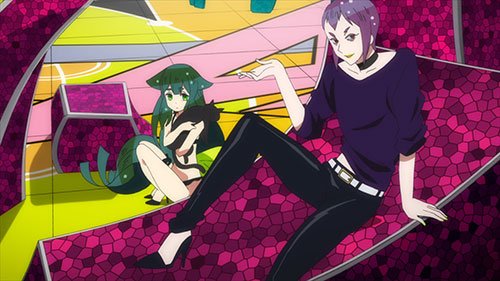 Taku Iwasaki’s soundtrack is as strong as in Season 1, lending an extra level of intensity to dramatic moments with dense and disturbing writing for strings or ethnic chanting. But he can also deliver the pounding upbeat electronics, chorus and strings of a heroic ‘superhero’ theme for the Gatchaman. Iwasaki (Gurren Lagann, Bungo Stray Dogs) is one of the most versatile and original anime composers out there right now and his work really deserves to be better known beyond Japan. WHITE ASH provide another strong Opening in “Insight”; with its snarling electronic guitar riffs, and aggressively repeated lyrics; new and angry thrash metal Ending Theme “60 Oku no Tsubasa” by ANGRY FROG REBIRTH features the Gatchaman in full battle transformation mode.

Having first watched insight in Japanese, I was intrigued to hear the US dub script and VAs, especially those for alien Gel Sadra (Bryson Baugus and Chris Patton) and newest Gatchaman Tsubasa (Chelsea Ryan McCurdy). Whereas the voices for child-size – and adult – Gel Sadra are convincingly done, I’m less happy with Tsubasa’s VA who sounds far too mature for a high school girl. However, Jessica Calvello has really grown into the role of the irrepressible Hajime and the other returning VAs impress. The dub script from George Manley and ADR Director Kyle Jones also impresses; this is one series which benefits from a snappy, colloquial English version that cleverly catches the informal tone of Millio’s TV Show and the online chatrooms. However, if you’re dub-averse, then there’s a more subtle range of character interpretations on offer in the original Japanese, especially from Kaori Ishihara as rookie Gatchaman Tsubasa – and the yellow subtitles work well.

The Blu-ray (reviewed) is easy to navigate and the only extras are clean Opening and Ending Themes and some Sentai trailers.

A psychedelic and dazzlingly colourful cautionary tale for our times – with superheroes! – that dares to question our growing reliance on social media. Fun to watch… but it might leave you with unsettling feelings for a while afterward. 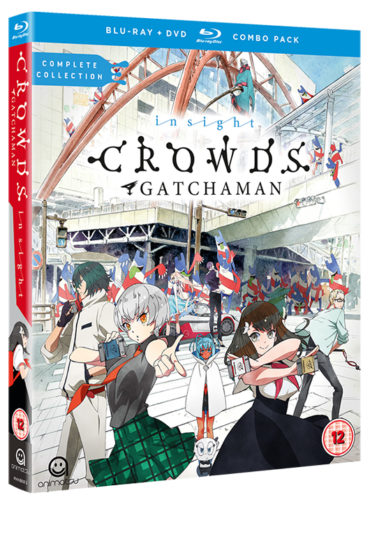 Himouto! Umaru-chan is a solid comedy with some fantastic use of references to beloved franchises. With a second season of the show airing in the autumn, now is a perfect time to get caught up with one of the best comedies of the year!