Update (2/11/27): Andrew Partridge from Anime Limited has responded with a statement, which can be found in the Anime Limited Discussion Thread on our forums.

Note: After this review was written, some allegations arose regarding some potential audio/visual quality issues in the Blu-Ray release. At publication time, these issues are unconfirmed, and we unfortunately can’t test for ourselves as we only have a DVD screener, and didn’t notice any issues with it. We’ve reached out to Anime Limited regarding these issues, and we will update this article with any response.

Makoto Shinkai has become something of a household name in Japan since he released his first work, She and Her Cat, a five-minute-long monochrome short that garnered the début director several awards and an instant recognition as an exciting young filmmaker. Since then, he’s gone from strength to strength, and last year, he released his fifth feature film, Your Name, to rave reviews and worldwide acclaim. 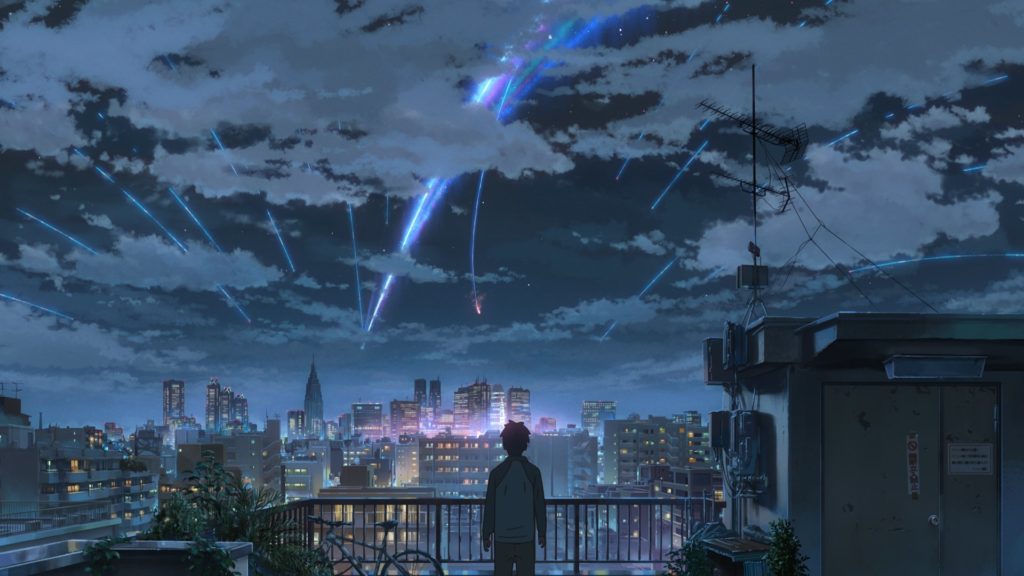 Your Name (titled Kimi no na wa in Japan) follows two teenagers  –  Tokyo-based Taki Tachibana and rural shrine maiden Mitsuha Miyamizu  – who find themselves randomly switching bodies with each other, and are forced to learn to live within each other’s lives, culture, relationships and traditions. But this synopsis does little to convey the content or power of the film – far from being simply a far-Eastern Freaky Friday, Your Name’s masterful production elevates it beyond an oft-abused trope, instead producing a powerful exploration of young love, memory, identity, and loss.

The story is difficult to describe without going into spoiler territory, but it makes for sensitive, compelling cinema – one of the very few body-swap stories to treat both halves of the swap with respect and understanding. While there are sexual jokes and gags, they go both ways and are played for awkward comedy, not titillation. Part of the reason the plot works so well is because the story is genuinely smart – while it is deep with metaphor and subtext, Shinkai works hard to keep it from becoming overwhelming. A great deal of subtlety is there if you want to look for it, but won’t interfere with the basics of the story. The characters aren’t overflowing with complexity, but all have a degree of depth to them that’s, sadly, often unusual for anime – while they are somewhat stylised (and, it could be argued, somewhat idealised), both leads are well fleshed-out and all the side characters have personality, ensuring every single character on-screen resonates and feels alive, even those relatively minor to the story. 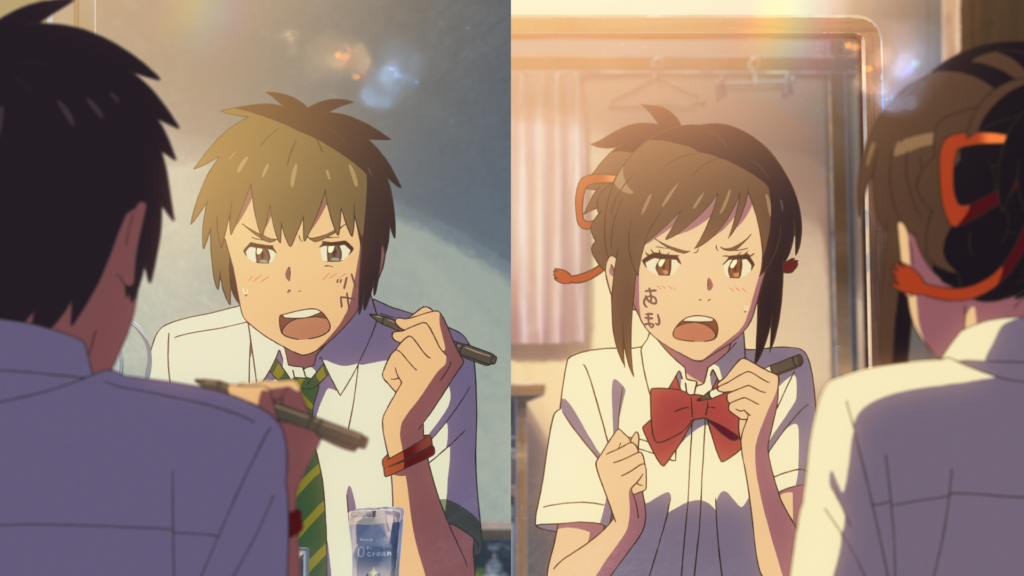 The story of two young people finding themselves (both literally and metaphorically) might be overtly fantastical in Your Name, but the core of it is a very human, very real struggle that is easy to identify with. Watching Taki and Mitsuha learn to work with their new situations, getting used to living as the opposite gender, learning to live in a new place, environment and culture while grappling with the expectation that they be instantly comfortable in their bodies resonates strongly with anyone who has felt uncomfortable in their own skin, and is executed with uncommon sensitivity and kindness. It’s a testament to Shinkai’s skill as a director that the portrayal of a struggle rarely seen in film is so confident, so compelling, that a viewer may find themselves watching their very psyche reflected back to them on the screen.

The film doesn’t entirely make it across the cultural barrier intact, however, as the film is inimitably Japanese. The film is split between two locations – urban Tokyo, and rural Itomori (complete with Buddhist and Japanese traditions integral to the plot), and some signage such as phone screens remains untranslated even in the English version. Many of the customs depicted also need some understanding of Japanese culture – while they’re not vital to enjoy the film, they can be off-putting to Western viewers. One scene in particular relies heavily on an understanding of Japanese pronouns to make any sense, even in English – the subtitles resort to including the original pronouns in brackets so the dialogue makes sense, whereas the dub makes a brave attempt at translating the scene, but the result feels disjointed and out-of-place. 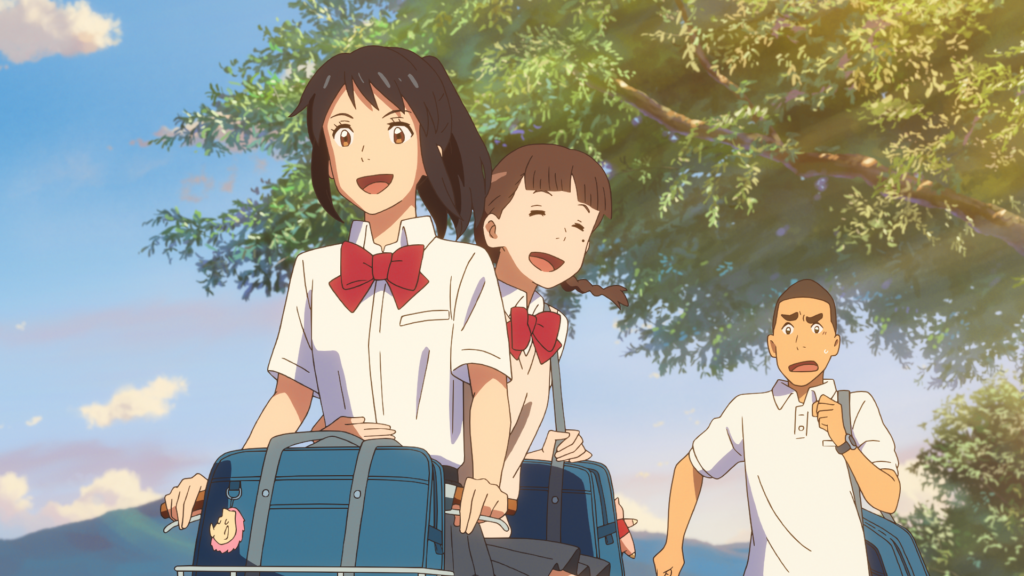 The source movie’s flaws are few, but obvious for their rarity. The rare dips into fanservice feels like they’re used just a little too liberally, and there’s a couple of decisions that don’t feel natural as part of the story, seeming to exist chiefly to avoid the story falling into a plot hole rather than feeling like natural choices for the characters to make. The more pedantic viewer can also pick out a small inconsistency in the story, where the two leads are both strangely oblivious to a small but vital detail that seems impossible to miss for so long, which would have had major consequences for the plot if they had noticed it. But these minor flaws are easy to ignore, and the relative consistency of the story is a marvel to behold given its inherent complexity.

For example, very few directors – whether Eastern or Western –  could handle a scene involving body-swapping, parallel action, and an emotional first meeting at the same time, particularly with the frequent changes in perspective required to make the scene make sense. But Shinkai nails it, managing to keep the audience entirely aware of what’s happening without resorting to lazy tricks like overbearing colour grading or obnoxious camerawork. Instead, he gently breaks one fundamental rule of film, using jump cuts to subtly indicate his intention to the audience. It’s a real achievement, and one that the finest directors in Hollywood could easily fail to match. 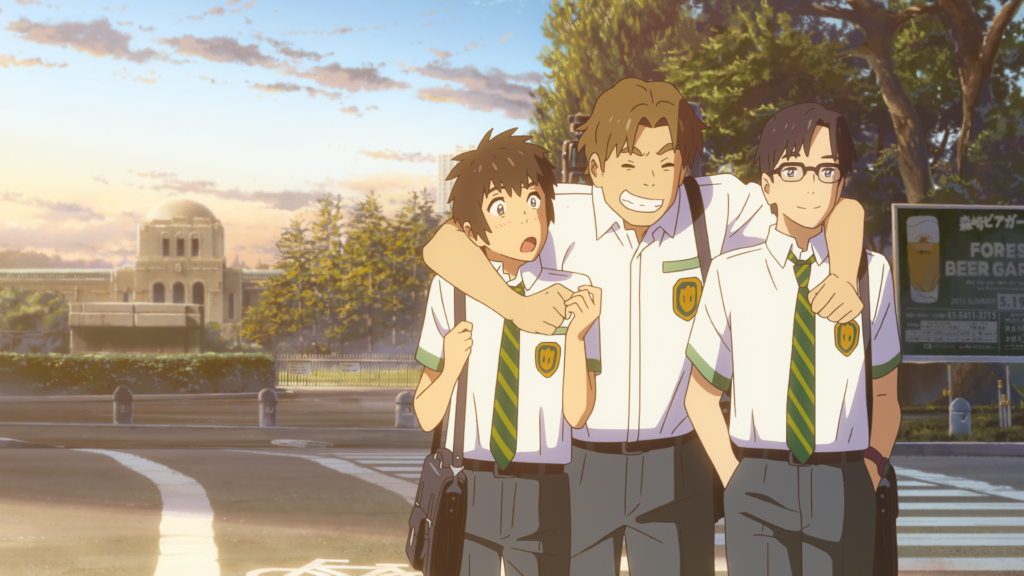 For those of us who have followed Shinkai’s work in the past, you’ll quickly notice that Your Name is a continuation of Shinkai’s twenty-year attempt to tell a very particular story – two teenaged characters, crossing paths with each other but finding themselves painfully separated – in Voices of a Distant Star and The Place Promised in Our Early Days, the characters are separated by literal distance, whereas later works play with the concept – The Garden of Words has its protagonists separated by social status and age, for example. Your Name takes the concept further – not only are the characters separated by physical difference, they’re also separated by their lifestyles, experiences, and even their memories, and the film builds on all of Shinkai’s works before it to achieve the most clear and poignant, joyous yet heartbreaking exploration of the themes within. It’s difficult to envision Shinkai surpassing Your Name in his next film without exploring drastically different themes.

As has become customary for a Shinkai production, the cinematography and direction is world-class, with production duties handled by CoMix Wave Films, Makoto Shinkai’s long-time collaborators. Each shot is a fine-tuned masterpiece of detail, colour, light and shadow, realised in fanatical detail. From the smallest flutter of fabric to the most spectacular comet shower, Your Name’s production is a culmination of Shinkai’s entire career so far, from the gorgeous rain-soaked landscapes lifted straight out of The Garden of Words to the 5 Centimetres Per Second-esque trains rushing by, the entire film is a delight for the senses. 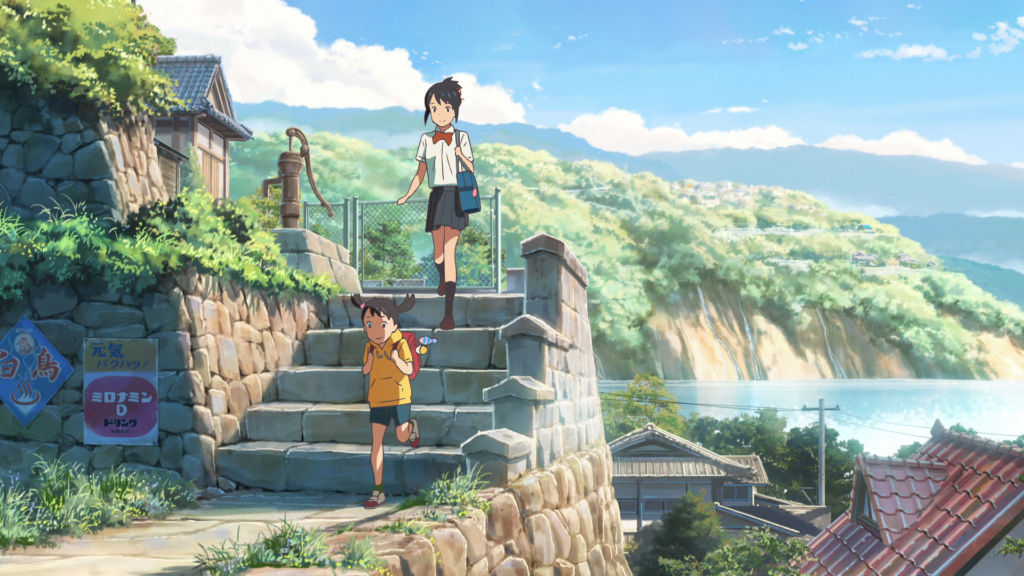 The music is, unusually for a film like Your Name, entirely composed by J-Rock band RADWIMPS, who also provided several insert songs that are played throughout the film. The score makes heavy use of plaintive yet catchy piano and string melodies, while the insert songs are firmly J-Rock. The shift can be abrupt at times, but the rock songs often coincide with fast-paced montages, and provide much-needed pace to the film – and prove to be extremely catchy. The four vocal songs (Dream Lantern, Zenzenzenze, Sparkle, and Nandemonaiya) are recorded by RADWIMPS with both Japanese and English lyrics, and both are available to choose on disc, and prove to be equally compelling choices. Including English songs from the original band is a smart choice for the dub, making it much more accessible to the film viewer who may not be well-versed in Japanese music. If you’re interested in sampling the music, both language versions are available on most major streaming music platforms, as well as on CD in the UK.

In the UK, Your Name is being released by Anime Limited in standard and deluxe editions, with the standard coming in either DVD, Blu-ray, or Blu-ray Steelbook edition, with a handful of extras: a feature on Makoto Shinkai’s filmography, trailers for other productions, and a 22-minute TV program showcasing the movie, exploring its themes and visiting some of the locations from Shinkai’s previous works. The deluxe edition includes both DVD and Blu-ray versions, both of which include the same special features as the standard edition. Also included in the deluxe edition is a rigid collector’s box, ten art cards (one numbered and serving as a certificate of authenticity), an A3 poster, an 132-page artbook with concept art and interviews, and a 27-track CD with the complete original Japanese soundtrack. 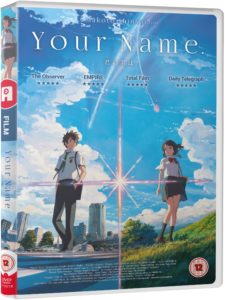 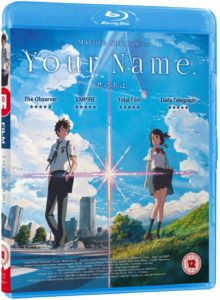 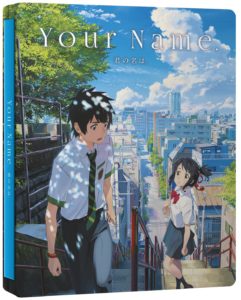 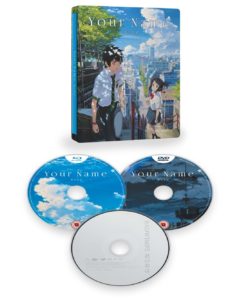 Your Name comes with three language options on both the Blu-ray and DVD – English with Japanese songs, English with English songs, and Japanese. All three versions of the film are solid and easy to recommend, meaning there’s no conundrums for those with a particular preference. Ryunosuke Kamiki (Kenji Koiso in Summer Wars, Sho in Arrietty) and Mone Kamishiraishi (Keno in Wolf Children) both turn in stellar performances as Taki and Mitsuha in the Japanese version, while Michael Sinterniklaas (Age in Patema Inverted, Leo in Fullmetal Alchemist) and Stephanie Sheh (Yui in K-On!, Nagi Aiza in Your Lie in April) play the characters in English.

My personal recommendation is the Japanese version, as the Japanese VAs turn in a slightly more subtle and nuanced performance – as an example, Mone Kamishiraishi’s performance changes subtly based on whether she is playing Mitsuha in her own body or Taki in Mitsuha’s, whereas Stephanie Sheh’s voice doesn’t really change much. This adds an extra depth to the performance which helps keep the audience centred on what’s happenng on-screen. Some aspects of the film also prove easier to follow in Japanese, such as the aforementioned pronoun confusion scene. 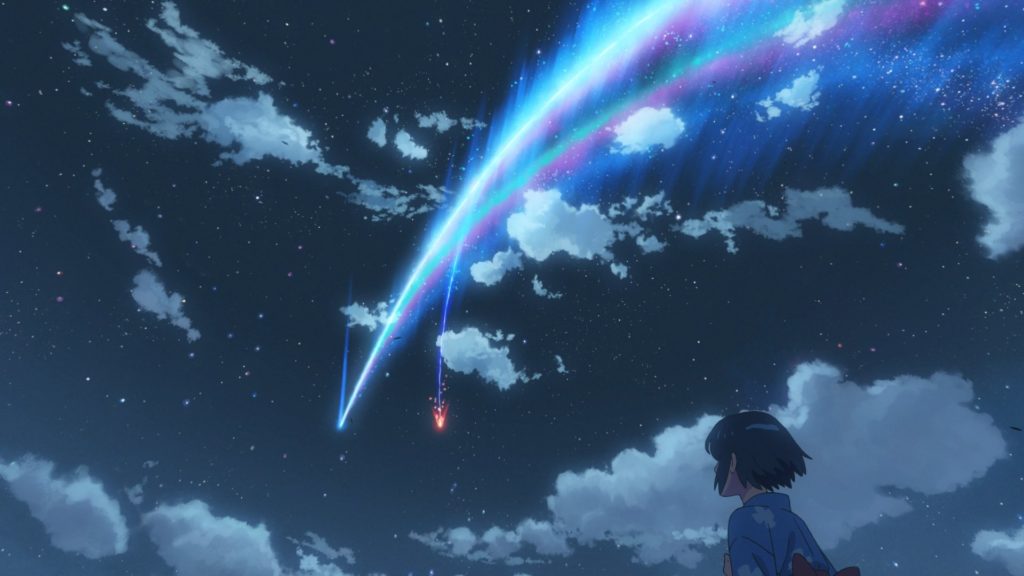 Your Name folds a well-worn trope into Makoto Shinkai’s signature storytelling style to produce a soaring, powerful masterpiece, as fantastical as it is naturalistic. Despite a few missteps, it easily cements itself as Shinkai’s finest work so far  and one of Japan’s best films of all time –  one that may prove to be almost impossible for Shinkai to surpass. 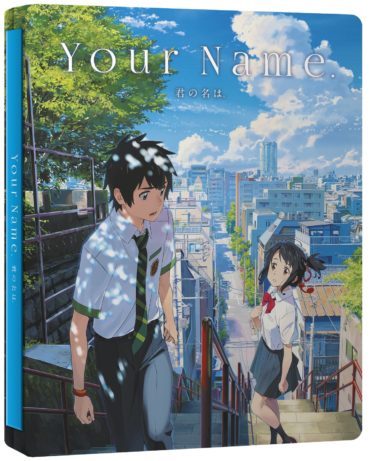 Watching my first Makoto Shinkai film in a cinema was probably one of the most memorible things I’ve experienced and Garden Of Words certainly was a great way for me to start my 2013 Scotland Loves Animation viewings here in Edinburgh. He was a guest of honor here at the sold out screening and delivered a quick … Continued