We’re only a few days away from Anime Limited’s highly anticipated release of Your Name, the award-winning Makoto Shinkai film that we recently awarded a rare 10/10 in our review. While most of us will have likely already decided on our chosen edition by now – Standard, Steelbook or the all-singing, all-dancing Deluxe Edition, but in a surprise announcement, another retailer exclusive edition has emerged. Anime Limited announced a partnership this morning with the Sainsbury’s supermarket to offer an exclusive variant of the film’s standard release in both Blu-ray and DVD formats, which will include four art cards.

Like the standard and Steelbook editions, the special Sainsbury’s promotion will be available from the 6th of November. The Deluxe Edition is currently set for release on the 23rd of November exclusively at All the Anime and Zavvi, and includes both BD and DVD versions of the film, plus a rigid box, ten art-cards (one numbered), a folded A3 poster, an 132 book of interviews and art, and a CD featuring the original Japanese soundtrack from RADWIMPS. Anime Limited have also teased a possible addition to the set if circumstances allow, which our sources suggest may be a replica wristband as worn by Taki in the film. 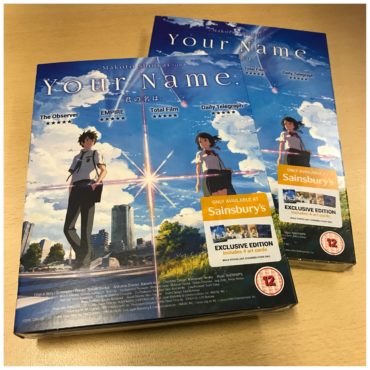