Following the incredible success of A Silent Voice, director Naoko Yamada is wasting no time in throwing herself behind the steering wheel of a new anime feature film with the fan favourite studio Kyoto Animation (K-ON!). This time, the talented director is returning to franchise film with Liz and the Blue Bird, the third feature film based on the studio’s Sound! Euphonium franchise.

Alongside director Naoko Yamada, Liz and the Blue Bird will feature other notable key staff from A Silent Voice, such as screenwriter Reiko Yoshida (K-ON! The Movie), character designer Futoshi Nishiya (Hyouka) and music composed by Kensuke Ushio (Ping Pong: The Animation).

While the first two Sound! Euphonium anime films recapped the events of the two TV anime series, little is currently known about Liz and the Blue Bird other than its central focus on characters Nozomi Kasaki and Mizore Yoroizuka. A second film, directed by Tatsuya Ishihara (The Disapparance of Haruhi Suzumiya) focusing on Kumiko as a second year student is also set to open in 2018.

Liz and the Blue Bird is scheduled to release in Japan on 21st April, 2018. A UK release has yet to be announced. The two Sound! Euphonium TV anime seasons are currently available to stream on Crunchyroll, while a planned home video release by Anime Limited was recently cancelled. 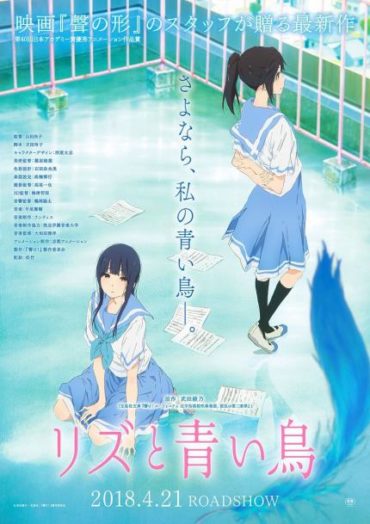 Your Memories of Kyoto Animation

One month on since the Kyoto Animation tragedy, readers and staff alike share their stories about just what the studio and their anime mean to us, and how they changed our lives.

Known the world over for hit anime like “A Silent Voice” and “K-On!”, celebrated anime director Naoko Yamada sat down with us to discuss her recent move to Science SARU, LGBTQ+ themes in anime, and more!

A Silent Voice, which was released in UK cinemas in March by Anime Ltd and National Amusements and “enjoy[ed] a strong box office result”, has been scheduled for Hard of Hearing showings across the country on Tuesday, 16th May at various Showcase Cinemas.