MyM, one of the few magazines to regularly cover anime and manga in the UK, has published its final print edition.

Issue 71, released on 16th February, will be the last edition to be published, although MyM will still have some online presence via the website MyMBuzz.com. The closure of the magazine is due to poor sales figures, and means that NEO is now the only anime and manga magazine still in print in the UK.

An editorial in the front of the last issue by the magazine’s editor Matt Chapman says: “You’ll find our crack team still providing you with the best mix of niche and mainstream entertainment online. But as Sinatra would say, as he bows out in style, ‘The record shows I took the blows and did it my way!’”

MyM was intentionally going to be just about anime and manga, with the original title going to be MyManga, but the title changed on the advice on MCM Comic Con’s founder (and later the magazine’s owner) Bryan Cooney to become MyM, with the second “M” standing for various things. Issue 0, released in March 2012, had the tagline “Movies, Manga, Media, More” and had Naruto on the front cover.

The magazine then covered various forms of geek culture including J-fashion, J-music, cosplay, games and western media. Issue 1 went on sale on 5th May 2012 and had on its front cover a preview to video game Tales of Graces F and on the back cover a preview of another video game, Lollipop Chainsaw. The final cover features were of American zombie series The Walking Dead on the front and an interview with cosplayer Tabitha Lyons on the back.

Among the people who wrote for MyM were Anime UK News’s Ian Wolf, who was MyM’s sole manga critic for all 71 issues that were sold. 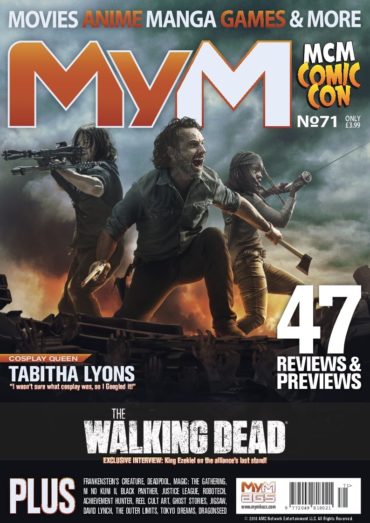