Note: The following interview was conducted at MCM Comic Con in May 2016, following the European premiere of Mobile Suit Gundam: The Origin III – Dawn of Rebellion and originally went unpublished due to a number of factors. In celebration of Anime Limited announcing a local home video release for the title, we are delighted to finally present to you this interview with Osamu Taniguchi (Producer) and Mika Akitaka (Mechanical Designer).

Congratulations on the Clash at Loum announcement¹! I was wondering if you could offer some insight into how the initial Gundam The Origin project first came together?

Taniguchi: Everyone asks that; I don’t really know. The Origin episode was there and it almost needed to be made into an anime.

02) This morning, you presented Gundam The Origin III: Dawn Of Rebellion to a European audience for the first time. How does it feel knowing your work is being enjoyed and appreciated across the world?

Taniguchi: It doesn’t seem real to be honest. Last week I was at a screening in Kansai; I’d been all over Japan for Parts I & II. I knew it had been translated but coming here, I realised how popular it is.

While The Origin‘s original manga largely recapped the original series, the anime focuses on the additions to Casval’s story. Why was this route taken as opposed to say, a wider television adaptation?

Taniguchi: Well, I think because it focuses on Char, then Amuro appears. The One Year War is the story of those two characters and Char’s revenge. So we really needed to know why Char is seeking revenge, otherwise there’s a missing link and that’s why we went down this prequel route.

Considering the enduring legacy of Char Aznable, did you feel any additional pressure or expectations when approaching this project?

Taniguchi: I expect Akitaka-san felt a lot of pressure; I didn’t really. It was the first time for me to be involved with Gundam and I was excited but I didn’t really feel pressure. That increased as it went on and by the end of the first episode, I was having meetings in my sleep.

Due to the age of Mobile Suit Gundam, were potential Universal Century newcomers considered during production, or was The Origin targeted specifically for established fans?

When designing mecha for a series like Gundam The Origin, do you draw on any existing technologies for inspiration or reference?

Akitaka: Yes but it’s a different era, so it’s not now – it’s a future era where we’re living in space, so I try to imagine how these technologies will develop in the future.

With The Origin’s release strategy being more of a global endeavour than past Gundam titles, would you say a greater emphasis has been placed on the international audience than before?

Taniguchi: Yes, in terms of the business model, it started with Gundam Unicorn and we learned from that with Origin. We could just stick to the Japanese market but we know there are fans in other countries, which is why we had it translated into six different languages and nowadays, with OVA in particular, you really have to release them overseas as close to the domestic release as possible. Which is why we decided to start to do the translation ourselves from the outset. With an OVA, you don’t have to keep doing it each week like a TV series, you just do it all in one go. That’s what we did with Unicorn and then with Origin. Iron-Blooded Orphans was for TV, so that happened when the Blu-ray came out, but when it was on TV it was also subtitled in the States just a couple of hours after it went out in Japan.

Especially in light of Mobile Suit development being a large part of The Origin, what would you say a Gundam personally symbolises for you?

Thank you for agreeing to this interview. In closing, do you have a message you would like me to pass on to our readers?

Taniguchi: First, make sure they watch Episode 3 and then Episode 4 when that comes out in the autumn²; make sure that you watch that. And then next year, I’m not sure exactly when, but the Loum chapter will come out³, so stick with us.

¹ = An announcement for the Clash at Loum followed the screening of Part III.

² = Mobile Suit Gundam: The Origin IV – Eve of Destiny was released in November 2016.

Mobile Suit Gundam: The Origin Parts I-IV Collection is currently scheduled to be released on Blu-ray by Anime Limited on 28th May 2018, with pre-orders opening earlier that month. 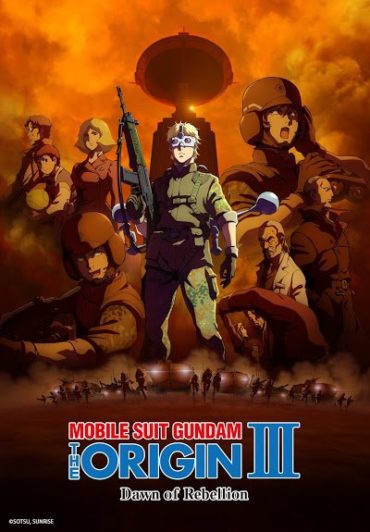