When a novel-original story is adapted into a film, a two-way relationship is formed; not only do the film producers expect to have fans of the book come to see the new version in cinemas, but the book publishers hope that those who like the film will eventually seek out the source material. So, both parties expect to benefit from newly-made and older fans with every new adaption. However, in some cases, this does not happen; occasionally a movie, TV series or video game can completely outshine the original source material to the point where it no longer exists in the public consciousness. For example, it’s often debated as to whether Die Hard is a Christmas movie or not, but rarely discussed if it matches the book it’s based on. The same can happen for Japanese media, if not more so, as sometimes the book or manga it’s based on is not always translated and brought over to the Western world, such as the semi-autobiographical book that Studio Ghibli’s Grave of the Fireflies is based on. The horror classic, Perfect Blue, is the same, thanks to Satoshi Kon’s excellent direction overshadowing the book, but now,  for the first time ever, the original novel is available in English. So, what is it about the original book that captured Satoshi Kon’s attention? And can the book live up to the animated cult classic?

On the surface, the plot of the movie and the book seem to be similar, with same-named characters and settings, even the cover of the book looks eerily like the outfit that Mima wears in the opening act of the film. But if you look closer, there’s actually a lot of minor, but significant differences. In the book, the story still follows a pop idol named Mima who seems to be at a crossroads in her career; she has mediocre CD sales and popularity, with the newcomer Ochiai Eri threatening to overshadow her. Mima’s manager suggests that she change her ‘pure’ and ‘innocent’ idol brand and evolve into a sexier image, complete with a risqué photo book release to coincide with her latest single ‘Sexy Valley’. As Mima starts to accept the new stage in her career, a mysterious man begins calling her personal number, begging her not to change, leaving messages at her work place and even at home. Then the begging turns to threats, and threats slowly turn into deadly anger…

In the book’s afterword, the writer Yoshikazu Takeuchi says he had an idea of an idol obsession turning lethal for several years, exploring what would happen if a fan’s growing attachment to them became  unchecked. His book, Perfect Blue, accomplishes this very well. Similar to the themes explored in the anime version, we get an insider’s perspective into the killer’s mind right from the start of the book: how he views Mima as his ideal of ‘purity’, his feelings of entitlement towards her, and how this slowly makes him evolve into a psychopath, or ‘monster’ as the novel labels him towards the end. The writing is very effective, and props go to the translator Nathan A. Collins for carrying across the chilling tone whenever we follow the stalker and how he details his obsessive feelings and gruesome actions towards the poor women that end up too close to him. It’s both gross and fascinating, you want to look away but have to keep to reading to see what he’ll do next.

The movie adaptation of Perfect Blue not only explored how fans (especially older males) perceive the idols, but also how the idols themselves are often pushed into dressing and performing in highly sexualised ways in order to stay ‘relevant’ or keep making money. This was explored through Mima’s point of view, how it starts to affect her mentally and emotionally over the course of the film. Within the book, it looks as if from the early pages that it plans to go the same route: the calls from the stalker and Mima’s hesitancy to put on a new persona start from the opening chapters. However, this is where the novel and film diverge the most, because Mima the book character is very different to her movie counterpart; she’s unsure at first of how to suddenly become ‘sexy’, as would anyone in her shoes, yet she is a much more assertive character. She takes creative control of her sexual image, pride in the work she does, and is much more confident in herself as an artist. A large part of this change might be more to do with that in the movie, she’s not only changing image but also careers (pop idol to actress) so there’s a lot more changes in one go. However the Mima we meet in the book has more agency, is grounded and is also surrounded by staff who are far more supportive and caring, rather than pressuring and controlling. Whilst that’s great for the actual character, and different from what we normally get when given an inside look into the world of showbiz, it’s also much more boring to read about. Mima in the book doesn’t change much, or go through an arc as such, we don’t even learn at the end if the fruit of her labours get the result she and her manager are striving for. She’s more two-dimensional, and like the rest of the staff, not as interesting as the killer himself or even the idol rival that Mima despises. This is why it’s important to read the afterword, to understand that the writer was more interested in exploring from the obsessed fan’s point of view rather than the idol, however it has the unfortunate side-effect of being compared to the more famous movie, which is a lot more emotionally and thematically deep and interesting than the novel ever aspires to be. It’s unfair as the book came first, of course, but story-wise, it’s a shame that Mima isn’t more of a rounded character in a story where she’s not being mentally tortured.

As mentioned previously, Nathan A. Collins provided the translation, with the publishing handled by Seven Seas Entertainment. The translation is very well done; it’s easy to read whilst keeping the ‘horror tone’ throughout the book, especially when it comes to the killer himself, and the one sex scene is also handled tastefully. It would have been nice if the book also came with a quick page to explain some of the prefixes and other Japanese pop culture references that are to be found in the book, just so that not-so-clued-up readers could follow along more easily. The writer Yoshikazu Takeuchi has natural pacing when it comes to story-telling but there’s a few writing choices that bring the overall book down; mostly the obvious times when characters are spouting exposition or haphazardly drop the killer’s M.O. in clunky dialogue, and towards the end the main villain, while creepy when you’re inside his head, loses his edge in the climax with cheesy dialogue that makes his ending scenes less scary and more silly.

Perfect Blue the book is not as psychologically or emotionally deep as its movie adaptation, but it’s interesting to see finally where the original spark for the film came from. As it’s so different from its movie, it can be enjoyed by non-fans of Satoshi Kon’s work, however fans may struggle to differentiate between the two as there’s enough that’s the same to compare and too much to really stand up to the 20-year anime classic. Still, I would recommend giving this a chance; it’s only 232 pages long and it’s rare to see original Japanese literature make its way over here. Pick up a copy if it piques your curiosity. 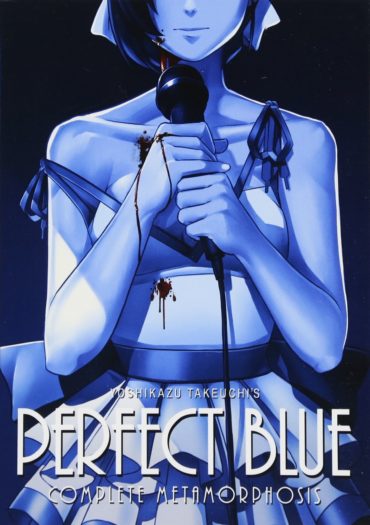 On the 23rd of August 2010, the acclaimed anime director Satoshi Kon passed away. His tragically early passing at the age of just 46, has been felt the world over. The anime community, and the animation scene as a whole is in mourning for the loss of a visionary who was at the height of … Continued

Perfect Blue is an effective psychological thriller that brilliantly plays with expectations and directly addresses uncomfortable, heavy themes for a mind-trip of a movie. Whilst the ending may not as stellar as the work leading up to it, this is definitely a film that any anime fan should treat themselves to this Halloween.