The Autumn 2017 anime season saw a superb amount of top-tier anime air, but among them all I was most charmed by a series known as A Sister’s All You Need. With a blend of over-the-top humour and a realistic portrayal of light novel authors, I found myself very invested in the show. Fast-forward to today and Yen Press has just released the first volume of the original light novels in English. Does it shape up as promisingly as its anime adaption?

The story begins with Itsuki Hashima, a popular, 20-year-old light novelist who has an obsession with little sisters. Because of this complex, all of his books revolve around characters and their little sisters but, surprisingly, his works have been popular enough for him to publish 20 titles in five years. While following the daily life of Itsuki, we also become acquainted with his friends: fellow authors Nayuta Kani and Haruto Fuwa, as well as Itsuki’s friend from college, Miyako Shirakawa, and Itsuki’s younger step-brother, Chihiro Hashima. The five get together to play board games, drink, and generally talk about the trials and tribulations of their work.

On the surface there isn’t a great deal of ‘plot’ on offer in this first volume. A large portion of it is busy introducing us to each of the characters individually and then bringing them together toward the end for a fascinating story revolving around them playing a tabletop RPG. Introducing them one at a time works well because they all have their own separate stories to tell with very different challenges and goals.

Nayuta is an 18-year-old award-winning genius novelist, who was inspired to write after reading one of Itsuki’s books. After having read his story, Nayuta also fell deeply in love with Itsuki and proclaims this to him as soon as the two meet. To this day she’s determined to make him her husband despite Itsuki’s flat-out refusals. The other female member of the cast, Miyako, is a ‘normie’ with no ties to the light novel industry, but after being inspired by Itsuki’s hardworking attitude the two became friends. She’s down-to-earth and very much the ‘big sister’ of the group, who works to keep the others grounded.

Then we have Haruto, who acts as Itsuki’s rival due to the two having debuted around the same time. Haruto’s novels are also popular but rely on romance and popular clichés rather than Itsuki’s little sister-filled stories. Although Haruto is technically doing better than Itsuki, as one of his series is already being adapted into an anime, he’s still jealous of Itsuki, whom he perceives to be a better writer. Chihiro, on the other hand, much like Miyako, has no understanding of the work his brother does but frequently visits Itsuki’s apartment to cook and clean for him. Thanks to visiting Itsuki so often, Chihiro has become friendly with all of his brother’s friends.

All of the characters presented have somewhat generic and stereotypical personalities but they’re actually well written by author Yomi Hirasaka. Each of them gives the impression that there’s more to them than meets the eye. Due to Hirasaka making the cast and humour so over the top, when we do get moments looking at their hidden feelings, they’re very hard-hitting.

I think this is a good time to mention that this light novel series is not as ‘tame’ as you might think from the front cover, synopsis, or its name. Much of the humour throughout the book is crude and adult in nature, and there are several very ‘not safe for work’ illustrations depicting female members of the cast naked.  Although there is an age rating on the back of the book which suggests that it’s fine for ages 16+, I personally think the volume deserves a slightly higher rating due to the nature of the illustrations (especially given that one is depicting lesbian sex). The author also enjoys slipping in jokes about Nayuta wanting to have sex with Itsuki or sexual references in general. Given that all of the characters except for Chihiro (who is underage) spend a lot of time drinking and talking about alcohol, it’s not exactly the best book for a younger audience.

I think this light novel being mislabeled (in my opinion) is potentially a noteworthy issue, given the fact that up until now there have been very few light novels with this kind of adult content published in translation. However, thanks to the boom in ‘isekai’ books brought to the West by Yen Press, it’d be easy for younger readers or parents to mistake A Sister’s All You Need as more of the same. This is especially a concern for parents who might not know better given that the front cover depicts ‘anime’ characters, which they might liken to cartoon characters. I can only hope that Yen Press adjusts the rating going forward – both for this title and other books like it.

I don’t normally find fan service and adult jokes enjoyable but in this case I don’t mind because ultimately it’s a ploy. Hirasaka goes so far with some of the jokes that I can’t take them even remotely seriously – and I don’t think I’m supposed to. I think ultimately they’re to draw your attention away from the very real fears and anxieties the cast have, and that’s why I recommend A Sister’s All You Need to people like me.

This is certainly not a series for everyone, but for someone who’s obsessed with stories like Anime Supremacy!, Shirobako, and Bakuman, which depict people working in creative industries, there’s something to be said for A Sister’s All You Need’s realistic portrayal of an author’s daily life and the troubles they face. Having watched the anime, I know there’s a lot of good content to come related to working in the light novel industry, which is why I can put aside the things I’m not usually a fan of and keep reading for everything else.

A Sister’s All You Need comes to the West thanks to Yen Press. The book has been translated by Kevin Gifford, and while I did notice one typo within, it’s otherwise problem-free and reads well. Illustrations for the volume have been handled by Kantoku and are well detailed. Kantoku has also drawn some really nice character ‘stat’ pages at the end of each chapter, which are fun to read through.

Ultimately A Sister’s All You Need is a good read for an older audience. It still contains things that might turn off that audience (Itsuki’s love for younger sisters being one…), but I think if you can look beyond that and are interested in the subject matter, then you’ll probably enjoy it. My only real concern is that younger readers will stumble upon it and be subject to the very adult illustrations, which is a real failing in Yen Press’ age rating system. That aside, I had a lot of fun reading this first volume, so I’m excited for future volumes and following more of these characters’ daily lives. 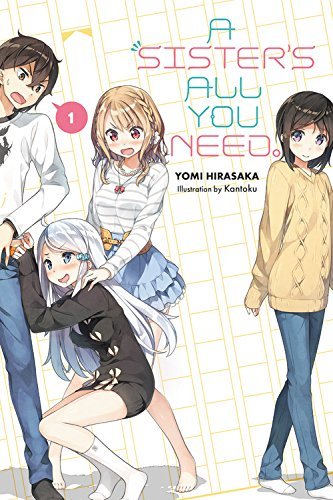 Title
A Sister's All You Need Volume 1

A Sister’s All You Need Volume 6 Review

A Sister’s All You Need Volume 6 delivers some lighthearted fun while navigating through the problems of falling in love with your friends. Coupled with more of the industry-focused stories we know and love, this proves to be another satisfying read.