When we left the cast of A Sister’s All You Need at the end of Volume 3, big changes were on the horizon. Itsuki had just been informed that his light novel series All About My Little Sister was to be turned into an anime! Now as we enter into Volume 4, how has the playing field changed for our young authors? Let’s take a look!

As we reunite with Itsuki, we discover that his light novel is not only being made into an anime, but also a manga series. Itsuki must now balance writing his on-going series, as well as overseeing the anime and manga productions. First up on his list: picking a mangaka.

Itsuki has the choice between five different mangaka to handle the manga adaption and he takes his time assessing them all before finally settling on a newcomer to the manga scene:  Kaiko Mikuniyama. Itsuki chooses her for the obvious love she holds for his series and the fact that her artwork is fantastic. After the two meet and talk about All About My Little Sister, Itsuki is confident about his decision, but we all know that nothing goes right for long in this series.

When Kaiko turns in her finished draft for the first chapter of the manga, Itsuki is understandably over the moon with her work. That is until he discovers that she’s altered a key scene of the story! In this scene Itsuki’s protagonist is supposed to be naked, so he’s shocked to find that Kaiko has drawn her in underwear. Worse, when Itsuki requests Kaiko change the scene, she refuses and argues with Itsuki about the value of underwear compared to being naked. Is his manga adaption doomed before it even begins?

Meanwhile, the final episode of Haruto’s anime series has finally aired and he can breathe a sigh of relief as he puts the terrible adaption behind him. News of Itsuki’s light novel becoming an anime worries him, especially hearing that Itsuki’s series is only being adapted after a different project fell through.

On one hand, Haruto wants Itsuki to suffer just as much as he did, but on the other, he hopes it’ll be a much smoother production. I mentioned in my last review that I thought things would come to a boil between Haruto and Itsuki soon and although we’re not quite there yet, this volume does elaborate on Haruto’s inner feelings. Haruto had a great time producing his anime (even if the end result was terrible) and he understands how disappointed fans of the series were. This understanding is what leads him to cheer on Itsuki (at least for now) because deep down he loves this industry and those in it. It’s a complex set of emotions but makes for great depth to Haruto’s character.

As usual, not everything about this volume is completely serious, with the final chapter revolving around the characters playing a new board game. The game is meant to put players in the role of a light novel author, and the cast go through many ups and downs as they play. It’s great fun to read for a light novel enthusiast such as myself because it openly pokes fun at the industry.

This board game chapter is also interesting for the fact that in Japan it was originally a drama CD bundled with a deluxe edition of this volume and its inclusion as a written chapter is potentially exclusive to the West. Despite its original format being a drama CD, it still reads well and if you really want to ‘hear’ the cast play the game, then the anime adaption of A Sister’s All You Need covers the game in the show’s final episode. The series streams on Crunchyroll so is easily accessible for those interested.

This volume of A Sister’s All You Need once more comes to the West thanks to Yen Press and has been translated by Kevin Gifford. The translation reads well and continues to capture the quirky collection of characters’ voices well. As a general warning, the illustrations (wonderfully drawn by Kantoku) are not safe for work, so maybe don’t flick through this volume in public.

Overall, the fourth volume of A Sister’s All You Need continues to offer the fun and insightful story we love. With an anime adaptation on the horizon for our protagonist, things are about to change drastically in his life and you’ll certainly want to come along for the ride. 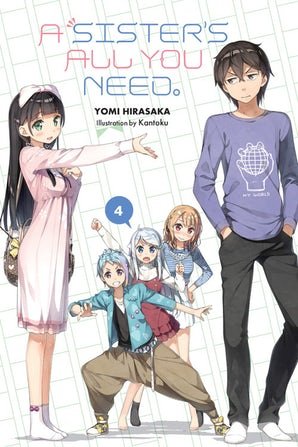 Title
A Sister's All You Need Volume 4