The fourth volume of comedy light novel series A Sister’s All You Need was full of trials and tribulations as we followed the adventures of protagonist Itsuki’s books being adapted into a manga. Now we’re getting into the fifth volume which promises a significant change for one of our cast, but is it for the better? Let’s find out!

This entry of A Sister’s All You Need sees Miyako agree to a part-time job in GF Bunko’s (who publish Itsuki and Nayuta’s work) editorial department. For a while now Miyako has been putting a lot of thought into how she can help her friends and wants to be more informed about the industry they work in. This opportunity allows her to both learn more and support those she holds dear.

Up until now, Miyako hasn’t understood the hardships that editors face, but when her first day on the job results in her chasing down a troublemaker writer who’s gone over their deadline, she’s quickly realising how hard her colleagues have it. With drinking parties, soul-draining meetings and ridiculous demands from authors and editors alike to contend with, will Miyako regret her decision?

One of the interesting things about Volume 5 is that it focuses almost solely on Miyako. We do see Itsuki, Nayuta and Haruto in passing but they’re never around for long. Because of this, a lot of the comedy has been stripped back and there are no board game chapters, but I think this works out remarkably well.

Throughout the previous four volumes, it’s fair to say that Miyako hasn’t quite fitted in with the rest of the cast. Yes, she’s friends with everyone, but not sharing in their industry meant she was often the character that existed for the others to explain the inner workings of the publishing industry to (mostly to benefit the reader). This book serves to fix that and finally give Miyako her own dreams.

As someone who’s fond of workplace stories, I certainly enjoyed this change in direction. It’s refreshing to see someone just starting their (potentially) future career rather than those already well established. The fact we’re already familiar with quite a few other characters who work for GF Bunko gives the author plenty to work with both for developing Miyako and inserting comedy moments where it makes sense to.

Despite being taken away from the regular cast, Miyako stands on her own as a protagonist remarkably well. She’s confident, gutsy and determined to make her newfound passion work out. This job gives her a newfound appreciation for the work her coworkers and friends do, which in turn fuels her determination all the more. It comes together to make for a fun read.

This volume of A Sister’s All You Need comes to the West thanks to Yen Press and has been translated by Kevin Gifford. The translation reads well with no issues. As usual, this release includes numerous ‘not safe for work’ illustrations, but there are a couple of safe ones toward the end of the book depicting some very emotional scenes.

Although this instalment of As Sister’s All You Need barely comes in at 140 pages, a lot happens. While I wouldn’t mind a return to the usual crazy hijinks the light novels are known for in Volume 6, for now I’m happy to have had the spotlight on the series’ most undeveloped character. 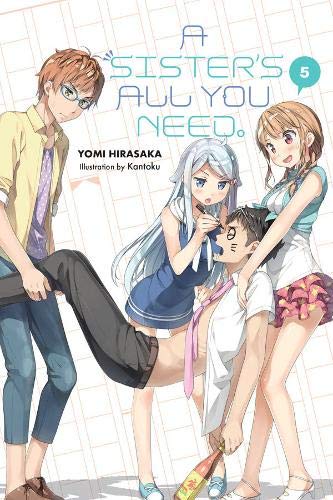 Title
A SIster's All You Need Volume 5