Being constantly knee-deep in isekai light novels, I’m always looking for series that can offer something different from the popular genre. Last year Yen Press started publishing comedy series A Sister’s All You Need, and when I reviewed the first volume, I was won over by what I found. Now that we’re into a new year, I figured it was time to revisit the series and see how the cast are faring – so let’s find out what’s happening in A Sister’s All You Need Volume 3.

This review contains spoilers for the end of the anime adaption, so if you haven’t yet watched the anime you might want to click away now!

When we reunite with the cast, things are in turmoil. In the last volume we read about Haruto’s light novel series being adapted into anime and the depression that set in as he watched the first episode, which had turned out terribly. Meanwhile, Itsuki had managed to miss several deadlines for the latest volume of his series and was forced into isolation by his editor until the manuscript was finished. Yes, our heroes were certainly in a slump and that’s a feeling that continues into this volume as well.

While things are looking up for Itsuki with the burden of his deadlines relieved, Haruto’s situation is only getting worse. Having given up on watching the anime adaptation of his series, and ignoring the criticisms on social media, Haruto begins to question what the point of his job even is. When something he loved creating and put so much passion into is so poorly received,  he wonders if he should just give it all up. Keeping these feelings to himself, Haruto instead opens up to Itsuki on the romantic feelings he’s begun to hold for Miyako and asks for his help in setting the two of them up. Sadly, this doesn’t go smoothly and Itsuki’s interference shows Haruto a truth he’d rather not have seen.

It might seem like this volume is doom and gloom but rest assured that the usual blend of over- the-top and hilarious shenanigans is present and accounted for. The comedic elements of this volume are difficult to talk about, given they more often than not veer into the ‘not safe for work’ zone, but if you’ve read the previous two books, then you know what to expect.

What I like about A Sister’s All You Need is that it never shies away from the difficulties of being an author or working in a creative field in general. As I’m sure you’ve figured out from this review so far, this time around the story focuses a lot on Haruto and the difficulties he’s having. His problems and feelings are relatable, and I’m sure many of you will also resonate with his struggles. Putting your all into something only for it to be underwhelming critically and generate so much hate from both new and existing fans is a bitter pill to swallow and Haruto now faces two choices: to keep going despite everything or to give in and quit. Although Haruto’s feelings haven’t yet come to a head, surely in the next couple of volumes they will.

The interesting thing here is that up until now Haruto and Itsuki have had a solid working and personal relationship. Although they debuted at roughly the same time, Haruto has always been more popular. However, Itsuki’s works have been steadily gaining traction and with the surprise reveal at the end of this volume, it looks like he’s about to stand on a par with Haruto. It’ll be interesting to see how this development affects Haruto, as well as what it’s going to mean for Itsuki, but these are thoughts for the future I suppose.

I feel it’s also worth mentioning that at the end of this volume there’s a heartwarming side story explaining what led Itsuki to begin writing light novels. I’m glad that we finally learnt about the driving force behind his passion and that it’s such a pure dream. Itsuki can quite often come across as full of bravado and confidence because of how well his books do, so to show a younger version of him stripped of that does wonders for his development.

This volume comes to the West thanks to Yen Press and continues to be translated by Kevin Gifford. The translation reads well and I’m especially fond of the use of various font sizes to empathise if a character is whispering or shouting. It helps to build a concrete mental image of the goings-on. There are also a variety of colour pages at the beginning of the book (illustrated by Kantoku) and these are a real delight and showcase the everyday life of our cast. One image is very NSFW though, so maybe don’t flip through this one in public…

Overall, A Sister’s All You Need Volume 3 provides a whirlwind of emotion and the tabletop RPG hijinks we’ve come to know and love. With the next volume finally getting beyond what the anime adapted, I’m looking forward to seeing what life throws at our cast next. One thing’s for sure, the life of a light novel author is never without drama! 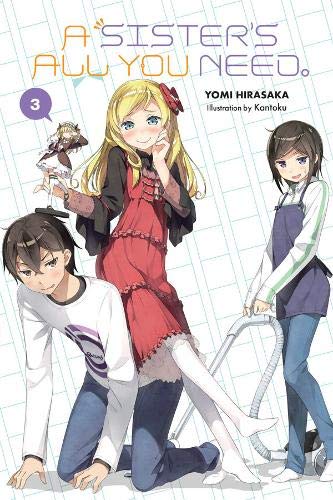 Title
A Sister's All You Need Volume 3