Volume 5 of romantic comedy A Sister’s All You Need took the series to new heights as it placed the spotlight on one of the most interesting and underdeveloped characters. Now we’re back with Volume 6, which has to follow up on a cliffhanger like no other. Let’s take a look at what’s happening to our cast this time around!

At the end of Volume 5, Haruto finally confessed his feelings to Miyako, whom he’d grown even closer to since she started working at GF Bunko. However, Miyako has never thought of Haruto as anything more than a friend and this sudden news drives her to confess her feelings to Itsuki!

As readers of the series will be well aware by now, Itsuki is in love with Nayuta. He wastes no time in turning down Miyako, which she expects, but is nevertheless heartbroken. Miyako now worries that she’s strained her friendship with both of the boys, but is also weighed down by the guilt of confessing to Itsuki, knowing Nayuta’s feelings toward him. Can the four overcome the awkwardness or is this going to break them up?

For the first half of Volume 6 of A Sister’s All You Need our cast avoid each other. Itsuki busies himself working on the upcoming anime project, while Miyako finishes her internship at GF Bunko. While she’s not sure if editorial is a profession she wants to pursue after college, Miyako is invited back anytime with the bosses telling her that she’s well suited to the job. As a reader, I’m also keen to see Miyako return to the industry as she’s a character that works well in contrast to the somewhat eccentric authors we see throughout the story.

Meanwhile, Itsuki’s anime is now at the point of needing voice actors, which offers us an insight into how they’re picked. Itsuki has wanted to be heavily involved with the adaptation of his work from the start, so he comes along to offer his opinions on rehearsals. It’s not long before our hero has the perfect voice actors in mind, but as always things never quite go to plan…

With my love for industry stories perhaps it comes as no surprise that the chapters revolving around Itsuki and the voice actors are some of my favourites in this volume. The tale shows us how pushy industry representatives can be if they want to promote a particular actor or if they are going to be difficult to schedule in for events. A lot of thought goes into these decisions and Itsuki has to push back hard to find a compromise between what he wants and what the studio wants.

I think author Yomi Hirasaka manages to strike a perfect balance between having their cast relax and portraying industry hi jinks in this volume. While the previous entry didn’t leave a lot of time for anything beyond Miyako’s job at GF Bunko, this one lets loose and gives us some chapters centred around the cast goofing off and playing games (and a hot spring visit for the boys). These work well to break up some of the more dramatic twists and turns which threaten to overwhelm the reader if left unchecked.

I think Hirasaka also deserves praise for the way they handle Itsuki’s character. After being confessed to by a love interest, other light novel protagonists would be confused, perhaps even entertaining the idea of dating the girl, but Itsuki is firm in his feelings for Nayuta. As a reader who prefers not to see the protagonist at the centre of a harem, I found it refreshing to witness the lengths Hirasaka will go to to reinforce the fact that Itsuki isn’t going to be swayed. I do hope both Haruto and Miyako find happiness in the future though because they both deserve it!

This volume of A Sister’s All You Need comes to the West thanks to Yen Press and has been translated by Kevin Gifford. As always, the translation reads well but there was a missing word in a pivotal scene right at the end of the book which is a shame. It’s easy to infer what the word was, but it did take me (and will take others) out of the moment.

Overall, A Sister’s All You Need Volume 6 delivers some lighthearted fun while navigating through the problems of falling in love with your friends. Coupled with more of the industry-focused stories we know and love, this proves to be another satisfying read. 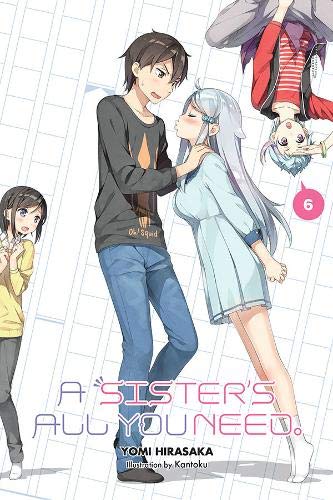 Title
A Sister's All You Need Volume 6