This is certainly a hefty tome – not only in terms of length, given that the publishers have decided to combine all four original tankobon volumes into a single edition over 800 pages in length, but also in terms of subject matter. Ode to Kirihito is a story that covers religion, racism, and Osamu Tezuka’s passion for the medical, he himself studying medicine before becoming such an iconic figure in manga.

Ode to Kirihito concerns itself with a mysterious disease called Monmow. Located in a remote village named Doggoddale in this English translation, those who contract it end up with cravings for raw meat and start transforming, taking on a dog/badger-like appearance with elongated faces, before finally dying.

Dr. Kirihito Osanai is an intern who is sent by his boss, Dr. Tatsugaura, to Doggoddale to investigate Monmow. While hesitant because he does not want to be separated from his fiancée Izumi, he ends up taking the job. In fact, it is a trap by Tatsugaura who wants him out of the way. Tatsugaura is running in an election to become president of the Japanese Medical Association, which he intends to do so by proving that Monmow is contagious. As Kirihito is a member of the critical Young Doctors’ Association, he wants to make sure he cannot interfere by sending him to Doggoddale in the hope he will catch Monmow and die.

When Kirihito arrives in the village, he finds himself having not only to deal with Monmow cases, but also with the locals who force him to marry a local girl, Tazu. Kirihito does indeed contract Monmow and undergoes a canine transformation, but he correctly concludes that the disease is not contagious, but endemic and caused by local contaminated water. As a result, he is able to prevent himself from dying of Monmow by avoiding the contamination.

However, this is just the start of his problems. When Kirihito and Tazu leave the village one day, Tazu is murdered by a rapist. Kirihito vows revenge, but he himself is beaten, kidnapped, and sent to a privately-run freak show in Taipei. He escapes with the help of another performer, Reika, whose act involves being completely deep-fried and emerging alive from the batter, but she turns out to be a fetishist with a love of freaks. They are then captured by a local village where Kirihito is put on display. He is later asked to use his medical skills to try and save the village chief, but he is attacked once more when the locals make a blunder. Again there is another escape, only for the duo to find themselves stranded in Syria. Kirihito eventually settles down in a village where the locals are not put off by his features, but he still wants revenge upon those who wronged him.

These wrongs are made even clearer when back in Japan, Tatsugaura arranges things to make it look like Kirihito is dead. Meanwhile, Kirihito’s colleague Dr. Urabe is sent by Tatsugaura to a conference in Apartheid South Africa where he comes across similar cases, and draws the same conclusions that Kirihito did regarding Monmow being endemic. He comes to the aid of a patient, a nun named Helen Friese and takes her back to Japan for treatment, but Tatsugaura is keener on exhibiting her to the association to secure the chairmanship. Urabe tries to prove his theories, but he in turn has his problems, being diagnosed with schizophrenia.

There is obviously a lot to take in with this book. Probably the most overriding theme in Ode to Kirihito is that of prejudice, and in particular racism. The entire story covers how people who contract Monmow are treated differently by society, and with Kirihito’s own transformation into this dog-like creature. For much of the story, he has to cover himself in bandages or a mask in order to hide his appearance from others. The racism theme is made even more explicit when Urabe is in South Africa, having to deal with the much more obvious bigotry of the Apartheid regime. Even the depiction of the abbot looking after Helen (when we first meet her) is shocking, as he attempts to kill both her and Urabe in order to prevent the news leaking out that white people can catch the illness.

Because of Helen, religion and in particular Christianity are also themes in the story. Helen tries to use her faith to help those around her when she is in Japan, eventually coming to the aid of those in a slum area. Tezuka at various points has drawings of Christ dragging his cross on the way to the Crucifixion.

Being one of Tezuka’s more mature works, the manga does contain several adult themes that make for uncomfortable reading. Aside from Tazu’s rape and murder, one side of Urabe’s schizophrenia appears to a side of him which is a rapist, attacking both Izumi and Helen, making the latter pregnant. His condition also what leads to his ultimate fate at the hands, or rather the wheels, from an early appearance from Truck-kun. There are other scenes of violence, murder, and nudity. In the case of the last of these, this mainly comes from Reika who does her batter act naked.

In terms of production, it feels as if the artwork is better than the storytelling. Visually the manga is compelling, especially with Kirihito’s character design as he becomes more dog-like. There should also be credit to Peter Mendelsund’s cover design, which personally speaking, looks better than the one he did for Apollo’s Song. In terms of the storytelling, there is a point half-way through the manga involving Tatsugaura where you know exactly what his fate is going to be, so the plot at times feels predictable. Some may have issues with Camellia Nieh’s translation, which includes translating the original Japanese name of the village Kirihito is sent to, “Inugamisawa”, to “Doggoddale”. As with the original Vertical release, this Kodansha reprint is in a flipped format.

If you can handle some of the more grisly aspects of the story, Ode to Kirihito is certainly a title that is worth investigation, dealing with all kinds of ideas that still speak to us today. 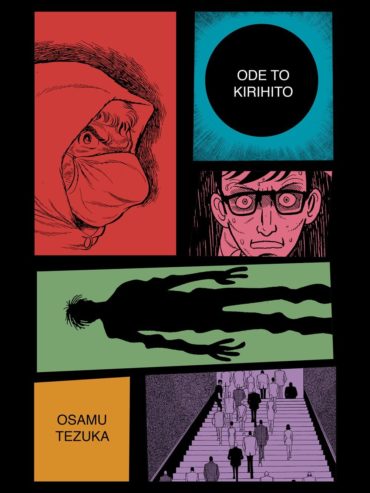 This horror manga involving a ghostly horse is disturbing in some unwanted ways.