Things have changed a lot for the cast of A Sister’s All You Need throughout the last two books. In Volume 5 Haruto confessed his feelings for Miyako, which led to her telling Itsuki she loved him in Volume 6. Then toward the end of that volume, Nayuta collapses from overwork which leads to a heartfelt discussion between her and Itsuki. Now the two have started to date, but as we enter Volume 7 of the series, this development is causing all kinds of problems!

News of Itsuki and Nayuta being a couple understandably causes Miyako to be caught between jealousy and being happy for the two. Haruto is also pleased for them but feels like Itsuki has gotten ahead of him in the game of life and wonders if he’ll ever be able to catch back up to his rival.

While we spend a large portion of this volume focused on the two new lovebirds, this book also moves the spotlight onto Itsuki’s brother (actually sister but Itsuki still doesn’t know this) Chihiro. Now his brother has a girlfriend, Chihiro is starting to feel out of place and wonders if there is room for him to keep handling the housework for Itsuki. Not only that, but he’s starting to feel lonely now Itsuki is spending so much of his free time on dates.

To lift Chihiro’s spirits, Haruto decides to invite him along to a mixer alongside rookie authors Ui Aoi and Aoba Kasamatsu, as well as regular members of the cast, tax accountant Ashley Ono and veteran author Makina Kaizu. While the party is mostly small talk and the boys being astounded by Chihiro’s model-making abilities, it’s when Haruto and Ui break off afterwards that a fascinating discussion about the light novel industry is held.

Since we’ve not talked about Ui before, let’s take a quick look at how she fits into the world of A Sister’s All You Need. Ui won the rookie award at GF Bunko, the publishing company all our writers work with. She and Haruto had a falling-out after she accused him of writing a cookie-cutter series to appeal to what’s popular, but despite that, she respects him for being the reason she became an author.

After being lectured by Haruto, she started to give more similar-sounding books a chance and realised that even if they borrow the same kind of setting or character types, these stories can change drastically in their second or third volumes. They become something that sets them apart. As a writer herself, Ui also begins to understand that what inspires these authors isn’t simply the drive to be popular or earn a lot of money, it’s just that they see an idea they like and want to try it for themselves!

As someone who reads a lot of light novels that are often from the same genre (like isekai), it’s always refreshing to have this aspect of the industry spoken about in a positive light. Readers are so quick to not give a light novel a second glance because it has a set-up they’ve heard before, but having read so many of these, I’ve seen how drastically they can set themselves apart further in. I think viewing this discussion from the perspective of a writer is also very important and I certainly appreciate the message author Yomi Hirasaka is trying to send through Haruto and Ui’s dialogue.

While Haruto and Ui are busy talking about the industry, Ashley and Makina are reminiscing about their old friend Kasuka Sekigahara. Kasuka was the author behind some of GF Bunko’s most popular series and she also wrote the in-universe A Sister’s All You Need light novels which inspired Itsuki to become an author himself. This chapter gives us a glimpse into a world before our heroes made their debuts and shows the hardships a popular author like Kasuka goes through, including having to end her series early after the decline of her health.

While this volume moves away from the industry-focused tales we’ve seen of late, I like the direction it takes. Having some downtime to enjoy some simpler stories revolving around the characters is rewarding and gives us the opportunity to get used to the new dynamics between them before launching back into any major plotlines. Instalments of A Sister’s All You Need are so short that they never outstay their welcome, but the shorter page count does mean that even these slice-of-life-focused entries are meaningful, since there isn’t anything to get bogged down in.

A Sister’s All You Need Volume 7 comes to the West thanks to Yen Press and continues to be translated by Kevin Gifford. The translation reads well with no errors to speak of. As a content warning: there is a short chapter focused around Itsuki and Nayuta having sex (and a naked colour illustration of Nayuta to match) but considering some of the sexually charged scenes we’ve seen in previous entries of the series, this was remarkably restrained. If you’ve been following the series until now, you’ll know what to expect, but it’s worth pointing out in case you flip through the book in a public place!

Overall, the 7th volume of A Sister’s All You Need takes a step back to chill out and focus on some of the characters we haven’t seen a great deal of lately. It’s not one of the best entries in the series, but what it offers is important and serves as a solid foundation for what’s to come. 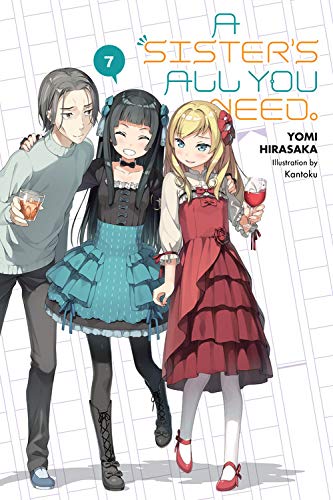 Title
A Sister's All You Need Volume 7