This horror/sci-fi series was the 20th winner of the Shogakukan Manga Award (General Category). Having been previously released by VIZ Media in its original 11 volumes, the series is now being revived in this hardback “Perfect Edition”.

It begins by following sixth grade elementary school student Sho Takamatsu, a typical boy who doesn’t want to grow up and gets into fights with his mother. Sho gets into a really bitter fight with her one morning, saying he doesn’t want to go back home when he leaves for school. During the morning class, a sudden shaking occurs in the building, followed by an incredibly loud booming noise.

At first everyone thinks it is an earthquake, but we, the readers, know what has happened because one of Sho’s classmates turned up late for school, which is lucky for that boy, for he survived what happened. The school has suddenly disappeared from the face of the Earth, leaving nothing but a hole in the ground.

Sho and his classmates however have survived this, and when they look out of the window they see… well, nothing. Everything around the school, including buildings, people, plants and animals, has gone. All that remains is a blank desert. The class go to the school roof to get a better view, when one of the girls in a fit of panic falls off the roof and dies. Chaos soon unfolds, with the teachers only managing to calm the students when one of them stabs a pupil in the arms with his broken spectacles. The school has no electricity, no running water and no way to communicate with anyone else.

Many of the adults in the school start to go insane. Sekiya, the man who delivers the meals to the school controls the entire food supply, demands all the power and kills anyone who tries to stop him, meaning the students have to fight together to overpower him. One of the teachers, Mr. Wakahara, also goes insane, killing the rest of the teachers and many of the students before he too meets his ultimate fate. Eventually things become clearer thanks to a boy named Yu, a three-year-old who played with Sho the day before the disaster and who was waiting nearby the school when it vanished so he could play with him again. Yu helps Sho uncover the truth as to what has happened to the school and why they can’t talk to anyone back home. Isolated, the surviving students end up having to run the school themselves, with an election making Sho the leader of the survivors, as they try to figure out how to live in their new world.

The Drifting Classroom is certainly a gripping and thrilling read. Although this omnibus edition is a large book it is a real page turner and you can find yourself going through the entire thing in a single sitting, wanting to read more and wishing to discover how these children can survive. Like with many books aimed at young adults today, it features adults as one of the main enemies to the children – by the end of this omnibus, only one adult is found to be alive, and even they end up insane. It is finally the children who have to sort out this mess for themselves.

It feels as if this re-release is rather timely. Given that in today’s world it is the children who are striking and demanding that something has to be done about climate change, it feels right that in this manga the children are the ones who are sorting out the mess they find themselves in. It does however feel slightly strange that a manga where the main characters are no older than 12-years-old cannot be read by 12-year-olds, as the manga has an “Older Teen” rating.

The series mixes elements of sci-fi and the supernatural themes. Concerning the second of these, Sho’s mother becomes convinced that she can hear her missing son’s voice from beyond. This results in her committing an act that eventually helps Sho. While these supernatural elements are secondary at the moment, future volumes appear to delve into this in more detail.

However, while the characters are children, the series is still written by an adult, and the main criticism that can be levelled at this title is the appearance of some old-fashioned attitudes expressed by author Kazuo Umezz. When the children are on their own, there is a power rivalry between Sho and a bullying girl who calls herself “Princess”. Eventually an election is held to decide who should hold power. An ally of Sho’s, a 5th grader called Gamo, who is the smartest boy student in the school, fights for Sho. However, while Sho is clearly better than the Princess to be the leader, one of the reasons Gamo gives as to why the Princess should not rule is: “a female isn’t fit to lead. Women are made to give birth and rear children, so they can’t think long-term. Their emotions cloud their logic. The fear is that a female leader would fail to see the big picture.” Now, you could argue that this is childish ignorance, but given that Gamo is the smartest character in the manga with an IQ of 230, and let’s remember it is the adult Umezz writing this, it does comes across as sexist.

It is because of this that the art feels better than the writing. Not only is there the drama of the adults turning against each other and the children, but as the story progresses we witness more landscapes and find other things in the desert that shock and grip us. Aside from Umezz’s sexism, most of the writing is fine, and translator Sheldon Drzka does a fine job translating the work – although you do wonder how he felt dealing with some of Umezz’s dodgier comments.

Overall, the series is mainly a grand piece of work, and, despite some issues, I, for one, plan to continue reading the next releases. 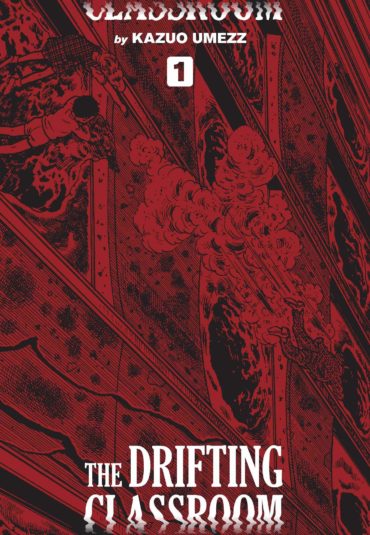