When it comes to our everyday lives, not many people would literally view life as a game. However, that’s exactly how the duo of Bottom-Tier Character Tomozaki, a new light novel series from Yen Press, view the world – which I’m here to review today!

Bottom-Tier Character Tomozaki’s protagonist, Fumiya Tomozaki, is one of the best in Japan when it comes to competitive fighting game Atafami, but in real life he’s shy, socially awkward and an outcast at his school. One day our protagonist agrees to an ‘offline’ meeting with one of Japan’s other top Atafami players, but Tomozaki is shocked to discover that his rival is none other than the most popular girl at school: Aoi Hinami!

Outside of school, Aoi Hinami is not even close to the perfect persona she projects. Rude, outspoken and grumpy, Hinami swears Tomozaki to secrecy about her identity, but as the two continue to talk, Tomozaki starts to wonder how Hinami manages to juggle her ‘real’ persona and her ‘perfect’ persona – which Hinami readily offers to explain.

Tomozaki considers life a terrible game that has never offered him anything fun, but Hinami reasons that, like with any game, you just have to get good before you can enjoy it. She agrees to give Tomozaki guidance to help improve his self esteem and status at school, but he’s going to have to work hard! Thus begins a comedy where the game of life is put through its paces.

It’s hard for me to decide where I stand with Bottom-Tier Character Tomozaki. This first volume feels like it spends its entirety setting up the plot and characters, to the point where I don’t yet think we’ve reached the meat of the story. The concept is an interesting one with the potential to evolve in several different ways (I wouldn’t be surprised if romance became more of an aspect, for example) but it’s hard to work out where it’s going from just this entry.

As a gamer myself, I appreciate all of the references (Atafami is almost certainly a Super Smash Bros. clone) and game analogies made throughout the story. In fact, those were the reasons that I kept reading the volume because the cast weren’t doing much for me.

While I appreciate that Tomozaki is supposed to be awkward and unlikeable, the problem with this kind of protagonist is that they’re sure to put some readers off. I didn’t feel much of anything toward Tomozaki, and even Hinami, who’s supposed to balance him out, felt like a fairly generic ‘senpai’ archetype. This meant that most of the comedy just fell flat and my only real hook was the gaming aspect.

I think there’s value in sticking with Bottom-Tier Character Tomozaki for another volume if you enjoy its style of comedy (just to see how things pan out), but I do feel that right now it’s a hard sell. At the moment there aren’t a lot of light novels like it out in the English market, which means it currently stands out for being different, but that doesn’t make it good either.

Author Yuki Yaku’s writing is easy to flick through but the dialogue can often feel quite repetitive, mostly because Tomozaki falls back on words like ‘but’, ‘yeah’, etc. Illustrations for the series have been provided by Fly and predominantly depict the various female characters. They’re nice illustrations but fairly unremarkable overall.

This light novel series comes to the West thanks to Yen Press and has been translated by Winifred Bird. The translation reads well and is problem-free. As always for a Yen Press light novel release, there are colour pages at the beginning of the book. Volume 2 of the series is currently scheduled to be released in November.

Overall, Bottom-Tier Character Tomozaki is a slow burner. If you have the patience to stick with it then perhaps an interesting story will come to light, but I doubt I’ll continue it. If you’re a fan of video games and comedy stories then this might be worth your time, but otherwise it’s worth giving a miss. 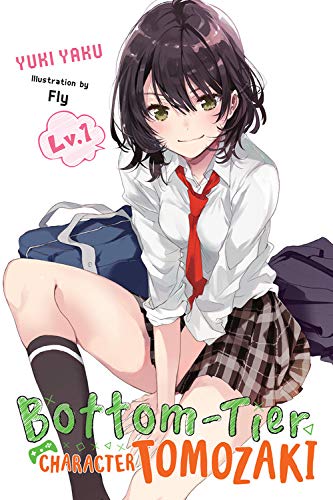 Minami Nanami is struggling with finding a place to belong, especially after her classmate Aoi Hinami begins to outshine her at track-and-field. Now Nanami is offered the opportunity to go into modelling, but will this role give her the chance to become the shining star she dreams of being?

As our protagonist takes her first steps into modelling, she finds herself with more questions than ever – but with the support of her friends and family, she continues her search for a place where she can shine.