It’s fair to say that Bottom-Tier Character Tomozaki has become quite a popular series in the last couple of years. With 12 volumes under its belt and a season of anime (with another forthcoming), it’s certainly big enough to have a spin-off or two to its name. Enter Minami Nanami Wants to Shine, a side-story manga focused on Minami. Does it prove an entertaining read? Let’s find out!

If you’ve read the first two volumes of the Bottom-Tier Character Tomozaki light novels then you’ll recognise Minami Nanami as one of Tomozaki’s bubbly classmates. She’s the kind of girl whose friends with everyone, but beneath the surface, Minami finds herself jealous of Aoi Hinami (another of their classmates). Minami has always been talented when it comes to track-and-field, but lately, Aoi has been outperforming her, leaving Minami wishing for somewhere she could outshine everyone else.

One day Minami’s mother asks her if she wants to be a model in a local ad for the makeup company she works for. Initially, Minami is unsure because that world seems so far out of her comfort zone, but seeing how difficult it is for her mother to find a model, Minami agrees. Later at school, she lets slip about her new job and is pleased when Aoi appears jealous of this development. With a spring in her step, Minami prepares herself for her leading role but is the world of modelling truly where she wants to be?

The world of modelling is dazzling, filled with people who shine. It’s a place that can offer Minami that sparkle she’s desperately hunting, but is it where she belongs? That’s the question that haunts our heroine as she starts the work and continues to be outdone by Aoi in the track-and-field club in the meantime.

Just because she’s found something she can do well doesn’t mean it’s the right fit for her and that’s more or less the message this manga is trying to convey. This ties in well to Minami’s character arc in Volume 2, where she ran for school council president with Tomozaki as her campaign manager. That story too was all about Minami struggling to find her place at school and wishing to accomplish something, especially if that something involved beating Aoi.

Volume 1 of Minami Nanami Wants to Shine comes in at about 140~ pages, so it doesn’t have a lot of time to get too far into the story. In fact, by the end of the book, Minami is only just starting the first official photoshoot for her role, so she’s yet to make her mind up on whether this is the right fit for her. I didn’t particularly mind the short page count myself, but I think in terms of the story, this one will be better read back-to-back with Volume 2, which I imagine will be more conclusive in Minami deciding on the direction she wants to take herself (even if only in the short-term).

It’s worth noting that, beyond Aoi, we don’t see much of any of the other Bottom-Tier Character Tomozaki characters, so you have to care about Minami if you want to get anything out of this one. I also think it helps if you’re up to date with the main series because although this manga seems to be set around Volume 2 of the light novels, it’s easier to care about Minami’s struggles here if you’ve been following her story for longer.

This manga is drawn by mangaka Bana Yoshida (who has a few titles to their name in Japan, but nothing else in the English market) with the story credited to original creator Yuki Yaku and character designs by Fly. Admittedly I was a bit sad to find Fly wasn’t doing the manga themselves, since their work on Chasing After Aoi Koshiba has been fantastic. That said, Yoshida’s art does manage to capture the charm of the characters and after some initial feelings that they were a bit off at the start, I managed to forget all about that as the manga went on. My only minor criticism is that the artwork can sometimes be overwhelmed by the speech bubbles because Yoshida draws quite small panels so there isn’t a lot of room to fit art and dialogue in the same place but other than that, the manga is very expressive and easy to follow.

Minami Nanami Wants to Shine Volume 1 comes to the West thanks to Yen Press and has been translated by Jennifer Ward with lettering by Bianca Pistillo. Ward is a different translator to the original light novel series, but the quirks of the cast and their voices are in keeping with the books so there are no issues here. The series is ongoing in Japan at two volumes and Yen has Volume 2 scheduled for an English release in July.

Overall, Minami Nanami Wants to Shine Volume 1 proves an interesting read for fans of the character. However, this first instalment is a little light on the page count, so it may be worth waiting for the next book unless you’re a particularly big fan of Minami’s. Either way, this is one that fans of Bottom-Tier Character Tomozaki are going to be eager to have in their collections. 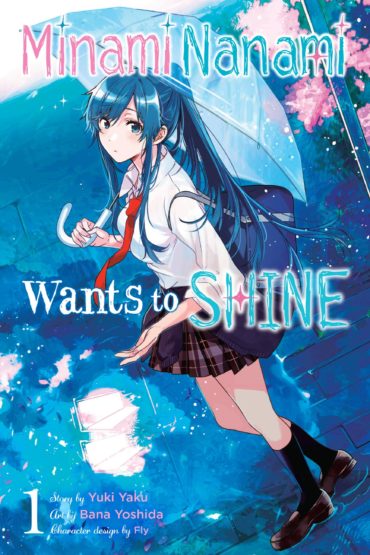 As our protagonist takes her first steps into modelling, she finds herself with more questions than ever – but with the support of her friends and family, she continues her search for a place where she can shine.

When it comes to our everyday lives, not many people would literally view life as a game. However, that’s exactly how the duo of Bottom-Tier Character Tomozaki, a new light novel series from Yen Press, view the world!