In April, I looked at Volume 1 of Minami Nanami Wants to Shine, a spin-off manga from the Bottom-Tier Character Tomozaki series, following Minami. In the first entry we saw Minami roped into modelling for her mother’s company, but is this an industry she wants to continue in?

As we reunite with our protagonist, she’s just finished her photo shoot. Her mother asks if she wants to become a model in this sparkling world but before she can answer, the two are interrupted. Afterwards, Minami meets Rumi Ashiya – a popular model who accuses her of nepotism leading to her landing the photo shoot!

Now Minami is left conflicted. She enjoyed her role and would like to continue modelling, but now she has doubts that she can make it on her own merit. And even if she does make it, it’s not all sunshine and roses as her mother and her workmates quietly hint at a darker side of the industry.

The company director tells Minami that if she enjoys becoming someone else and doesn’t like herself then maybe she’s well suited to the work, which only adds to her concerns. Does she like herself? Is wanting to find somewhere to shine the same as rejecting her current self? There are a lot of questions and to figure out the answers, she’s going to need some help from her friends…

While Minami might be unsure about continuing in modelling as a career, her mother suggests she opens an Instagram account to help build her brand in case she does decide to pursue it. To start with, Minami’s not sure what kind of photos to post, but with some help from Tomozaki, she muddles her way through and finds that using social media like this can be fun!

Just as in Volume 1, the chapters in this book all carry the same message about trying to figure yourself out and where you want to be. Minami is certainly getting closer to the answers and for us readers, it’s interesting to see how the adult characters around her react to her thoughts and feelings. Although it’s yet to be confirmed, it’s obvious that Minami’s mother used to enjoy modelling but has mixed feelings about it on the whole.

The new character, Rumi, falls into a similar place, where she’s enjoying the job but also jealous of Minami whom she perceives as having gotten in thanks to her mother and doesn’t have to work hard to maintain her natural beauty. In many ways, I’m just as interested in learning more about Rumi as the series goes on as I am seeing Minami figure herself out.

I mentioned in my Volume 1 review that the first book would be better read back-to-back with this one and that’s something I still believe. We’ve reached a much more comfortable stopping point by the end of Volume 2 and we’ve discovered the meat of the story. It’s easier to recommend now and not even just based on whether or not you like Minami, but also because it’s turning into a solid story about growing up and finding yourself.

I especially appreciate that author Yuki Yaku doesn’t shy away from the negatives of modelling and instead leans into exploring the industry from both sides of the camera lens, which prevents it from being an idealistic story as you’d normally expect from this genre/demographic. It may have been a slow start, but now I’ve read more, I’m excited about seeing how the series will develop from here.

Minami Nanami Wants to Shine Volume 2 comes to the West thanks to Yen Press and continues to be translated by Jennifer Ward. The translation reads well with no issues to note. We now find ourselves caught up to what’s currently released in Japanese, so we’re unlikely to see a Volume 3 in English for quite some time now.

Overall, Volume 2 of Minami Nanami Wants to Shine proves an improvement on the series’ first entry. If you enjoyed Volume 1 then you’ll certainly want to come back for more and find out where Minami’s headed as she searches for a place where she can shine. 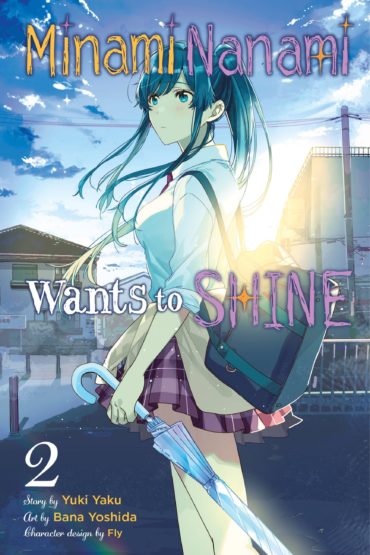 Minami Nanami is struggling with finding a place to belong, especially after her classmate Aoi Hinami begins to outshine her at track-and-field. Now Nanami is offered the opportunity to go into modelling, but will this role give her the chance to become the shining star she dreams of being?

When it comes to our everyday lives, not many people would literally view life as a game. However, that’s exactly how the duo of Bottom-Tier Character Tomozaki, a new light novel series from Yen Press, view the world!