For many of us, bookstores are a place of magic and wonder: places we go to find a new story to lose ourselves in – but have you ever wondered what goes into running one? Here with the answers is Skull-face Bookseller Honda-san, which takes a look at what it means to work in a bookshop in Japan!

The story follows Honda-san, a skeletal bookseller who’s in charge of foreign comics and art books in the bookstore he works at. Alongside his co-workers Honda-san does his best to meet the varied and sometimes weird requests of the shop’s customers as he juggles his everyday tasks in this workplace comedy.

It’s not just the customers Honda-san has to help, as he also has to reject pushy sales people who are trying to get their books promoted! Naturally no bookstore has the space to promote every new book in a given week, but despite this, the publishers try their hardest to get stores to advertise their wares – and Honda-san has a difficult time saying no…

Some of you may already be familiar with Skull-face Bookseller Honda-san thanks to the anime that aired last year. The series took the internet by storm when Honda-san encountered a father on the hunt for a ‘special yaoi book’ for his daughter in one of the early episodes. For a book lover like me it was an unforgettable story, and I’m so glad that the manga has now reached our shores.

Like the anime, the manga goes in-depth on what it means to work in a bookstore. It’s full of interesting information I never knew before, but it’s not just informative. It’s also great fun! The characters we meet throughout this first volume are varied, from yaoi fans to shonen collectors and those who’ve come from overseas. Both the cast themselves and their interactions with Honda-san are all very unique and a real joy to flip through.

This manga is based on mangaka Honda’s real life experiences working as a bookseller, which gives the series a very genuine feeling. Although Skull-face Bookseller Honda-san would have undoubtedly been a fun read without this ‘inside knowledge’, it’s hard to deny that the wacky antics are easier to buy into when you know they’re true to life.

If you’re even remotely a fan of books (not necessarily manga, but that helps!) then you’ll have a great time reading the series. No doubt if you work in retail yourself you’ll also get a kick out of the interactions Honda-san shares with his coworkers, who all have problems of their own in their various store sections. Speaking of Honda-san’s coworkers I feel it’s worth mentioning that they’re all given fantastical designs like Honda-san. Each individual has a unique mask or piece of headgear that they’re identified by. For example: Fox-san and Lantern-san, named after the fox mask and lantern helmet the two sport. It’s a fun idea and adds a lot to the comedy element of the series.

Where artwork is concerned, this first volume looks fantastic. If you’ve watched the anime then you’ll already know what to expect, as it’s very true to the manga. For those of you who haven’t seen the anime, the artwork for Skull-face Bookseller Honda-san is very detailed, expressive and fun. There’s a lot going on from panel to panel but, with clear and distinct outlines for the cast, it’s easy to follow what’s happening on the page and distinguish what’s important from any given scene. The series’ humour relies on the visuals and the mangaka does a fine job of making sure every joke lands perfectly.

The only downside for some readers is that there are a lot of references to manga and anime made throughout this volume, and some of the jokes don’t quite work if you don’t get them. This volume includes lots of translation notes at the back of the book to try and help you through, but I’m sure it could become annoying to go back and forth for them if you aren’t getting any of the references.

Skull-face Bookseller Honda-san comes West thanks to Yen Press. The series has finished in Japan at just four volumes and Yen Press currently have Volume 2 scheduled for an October release, with Volume 3 in January 2020. Volume 1 has been translated by Amanda Haley and the translation reads well. I think praise is especially deserved for how well Haley manages to convey scenes where Honda-san is dealing with English customers and speaking in broken, stuttered speech. It does a great job of both showing that Honda’s out of his comfort zone and that he’s struggling to communicate.

Overall, Skull-face Bookseller Honda-san is a real treat for book lovers. If you’re an existing fan thanks to the anime then the manga is well worth jumping into, but newcomers will also greatly enjoy their first steps into Honda-san’s world. I’m certainly looking forward to Volume 2! 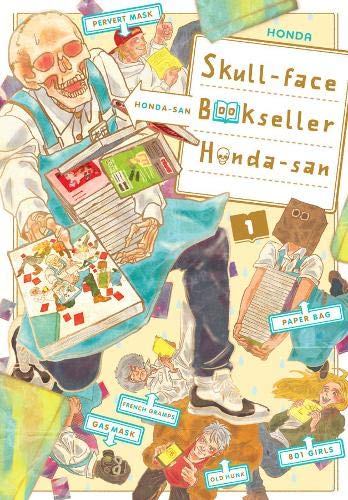