With the release of Volume 3 of Skull-face Bookseller Honda-san, we’re now more than halfway through the comedy series. After a slight change in direction with Volume 2, does the latest instalment prove a return to form? Let’s find out!

As we reunite with Honda-san, we’re treated to tales of how booksellers decide which books to keep in stock and those to return to the distributor/publisher, what happens when the staff change departments, and how seeing book-loving customers gives the workers a feeling of accomplishment.

Also featured in this volume is a story based on the idea of running a bookstore in a fantasy world, which the author claims some people expected the manga to be, considering the fantastical character designs. Fans of the anime will remember this tale fondly from the 11th episode of the anime series.

Like the previous volume, this entry of Skull-face Bookseller Honda-san spends a lot of the book exploring the inner workings of the bookstore but, unlike last time, it’s better balanced, with comedy moments. This is especially true of the first chapter, where a popular author is tweeting about the release of their new book causing customers to flock in, asking about it (and Honda-san having to repeatedly apologise for having no copies left!). Honda-san must balance both the customers and trying to organise more copies, while explaining to the reader that trying to get reprints from certain publishers can be extremely difficult.

Perhaps to be able to tell more stories from their workplace, mangaka Honda has filled certain chapters of Volume 3 with disclaimers about the opinions in the story being their own. After getting in trouble for a chapter included in Volume 1, I imagine this is a way of making peace with their workplace.

The other interesting thing happening ‘behind the scenes’ of this volume is that Honda left their workplace between Chapters 17 and 18. Having done this, they intended to end the manga with Volume 3 (and Chapter 20, the final in this book) but with the anime adaptation announced (at the time), their editor asked them to continue.

We already know that Skull-face Bookseller Honda-san ends with Volume 4, but with the mangaka admitting they’re out of material for the story in this afterword, it makes me wonder how the next entry might change in tone yet again. As much as I’ve loved my time spent with the series, I’m concerned about it being stretched thin, but we’ll have to wait and see what happens.

Having said all of that, if you’re someone who was put off by the changes in Volume 2, I think it’s worth picking up this release. Not just because of the better balance but also because the stories are genuinely fascinating. If you know much about the big publishers in Japan then you’ll get a kick out of finding out which ones the manga department curse for constant releases.

As someone who genuinely loves books (and bookshops!), it warmed my heart to read the chapter about Honda-san and the book lovers who frequent the store. This includes some children who are passionately choosing their purchases. Honda-san comments that there is nothing better than seeing the twinkle in their eyes as they buy their books, which in turn lifts the spirits of the staff.

This volume of Skull-face Bookseller Honda-san comes to the West thanks to Yen Press and continues to be translated by Amanda Haley. The translation reads well with no issues. A minor issue I was having this volume is that I sometimes find it difficult to work out which lines of dialogue in a panel I was supposed to be reading first. However, this was due to mangaka Honda’s placement of it, rather than an issue with the English release. 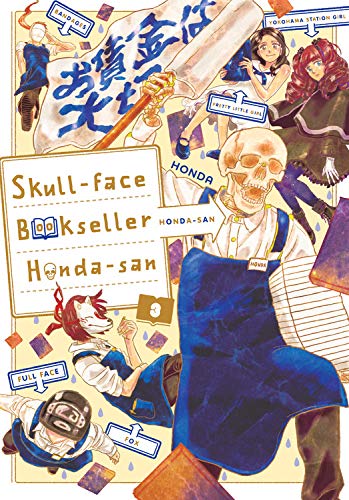