Fantasy stories involving King Arthur and Merlin are a dime a dozen, but that hasn’t prevented light novel author Taro Hitsuji from writing his take on the famous heroes. Today I’m here to check out the first volume of Last Round Arthurs, which promises to offer a King Arthur story like no other!

Last Round Arthurs is set in the modern day where most people have lost the ability to use or perceive magic. However, in the coastal waters of the archipelago of Japan sits man-made Island New Avalon. On this island is the city of Avalonia, where our story takes place. In this city, eleven people from the bloodline of King Arthur have gathered, to compete and decide who should become king. These candidates can call upon eleven knights of the Round Table, named Jacks, who help them compete in battle.

The story follows high school prodigy Rintaro Magami who has grown bored with his daily life. In search of excitement, he gets involved with Luna Artur, a candidate to become King Arthur’s successor who will save the world from certain doom. Luna is impulsive, air-headed and, worst of all, has sold off her Excalibur! Rintaro has his work cut out for him if he’s to get Luna crowned king, but perhaps this is just the thing to liven up his dull life.

Luna is considered the weakest and most unlikely candidate to become king. Her Jack is Sir Kay (depicted as a woman rather than a man), who is a crybaby and also considered fairly weak. Having sold her holy sword Excalibur, Luna certainly has all the odds against her – but that’s why Rintaro finds her interesting. The strongest partnering with the weakest is appealing to him; he wants to be the underdog and come out on top.

Overall Last Round Arthurs is a battle royale series, which I’m perfectly fine with. Although we were seeing a lot of these kinds of stories come out of Japan a few years ago, that’s not the case right now. It also helps that this is not an isekai story. Offering something different and yet still appealing to fantasy fans is a smart move on publisher Yen Press’ part.

If stories about Arthur and Merlin are your thing then you’ll get a kick out of Last Round Arthurs. Rintaro is Merlin born anew, left to deal with a childish but kindhearted king who often needs to be reined in. It’s trouble for him, but for us, as readers, it’s great fun. Meanwhile, the spin of Luna being such an utter goof (and a girl) when she’s sure to one day prove herself worthy of the title King Arthur is also entertaining.

Author Taro Hitsuji (also the author of Akashic Records of Bastard Magic Instructor) has written a perfect combination of characters here. Although Luna is flawed, she’s certainly not a weak female character – which I think is important. It would be easy to have Rintaro to come in and save the day all the time, but that isn’t reality. The two are a team and Luna might not be quite as powerful as Rintaro yet, but she can certainly put up a fight all by herself.

In terms of the writing, Hitsuji has done a great job. The style is very descriptive but they also manage to tone it down during fast-paced action scenes. It’s easy to imagine what’s happening to our characters and the whole book just flows well, never outstaying its welcome. The dialogue between characters is witty and entertaining, more often than not leaving me smiling the whole time. Luna and Rintaro bicker a lot, but it’s the fun kind of back and forth you’d find in a series like Konosuba or perhaps even The Devil is a Part-Timer!.

This series comes to the West thanks to Yen Press and has been translated by Jan Cash. The translation reads well and, as mentioned earlier, the dialogue is superbly translated, so I’m very happy with Cash’s work. Last Round Arthurs is on-going in Japan at 4 volumes, but Yen Press doesn’t appear to have any more volumes scheduled at the time of writing which suggests the series may have a slow release.

This volume includes several colour pages which capture the free-spirited nature of the series well. Illustrations have been handled by Kiyotaka Haimura (A Certain Magical Index, Is It Wrong to Try to Pick Up Girls in a Dungeon?: Sword Oratoria) and although I’m not a huge fan of Haimura’s work on Sword Oratoria, I loved the pictures in Last Round Arthurs.

Overall, Last Round Arthurs delivers a satisfying fantasy adventure. The legend of King Arthur and Merlin may be quite different with Luna and Rintaro at the helm, but one thing’s for sure – it’ll be a crazy ride. Those of you looking for a new sword and sorcery adventure will love what this light novel has to offer. I’m certainly on board for more. 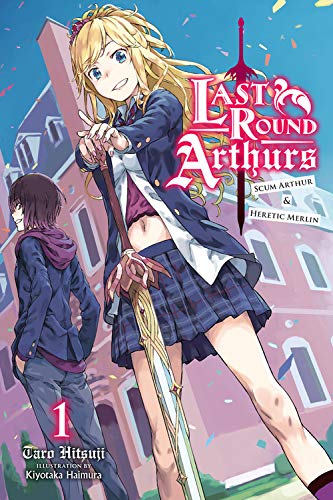 After a whole year between volumes, Last Round Arthurs returns with the release of Volume 2. With Luna eyeing up an expensive mansion (which she’ll spend Rintarou’s hard earned cash on!) and a old friend of Rintarou’s transferring into school, things are about to change drastically for the duo…

In the third volume of Last Round Arthurs Luna, Rintarou and friends enjoy a peaceful barbecue before being attacked by a new King! This one is obsessed with justice and has his sights set on murdering Luna, so it’s left to Rintarou to find a way of saving the day once more.