One of my favourite light novel debuts of 2019 was fantasy series Last Round Arthurs. After waiting a whole year since Volume 1, publisher Yen Press has finally published the second instalment of the series. Today I’m here to find out if it still proves an entertaining read!

As we reunite with Luna and Rintarou they’re debating how to stay safe in the succession battle for becoming King. Rintarou is worried about the two being attacked while they’re away from one another in the school dorms at night, so he asks Luna to buy a home for them to live in together rather than staying in the school dorms.

When Luna reminds Rintarou that she’s broke, he lends her his bank account but is flabbergasted to find that she’s spent his life savings on a mansion! While Rintarou struggles with the sheer irresponsibility of Luna’s actions, our hero is more distracted by the arrival of a new transfer student!

The new girl is called Emma Michelle and alongside her Jack, Sir Lamorak, has joined the succession battle. Not only that, but Emma also has a history with Rintarou which is about to cause major problems for Luna when she and Rintarou are already on thin ice. It’s not long before Emma and Rintarou begin to become closer as friends and so, left with no choice, Luna challenges Emma to a contest with the winner claiming Rintarou for their own.

Rather than being focused on the succession battle for being crowned king, Volume 2 of Last Round Arthurs is more character-driven. Rintarou and Emma were friends from before Rintarou came to the city of Avalonia. When they met, Emma was lost, unsure what to do with her life and suffering at the hands of the priests trying to force her into joining the battle to become king. With Rintarou’s help, she became more confident and chased after him, hoping to have him join her team.

Rintarou’s relationship with Emma helps give us more of a glimpse into his kind-hearted nature. Although he often acts indifferently toward Luna, it’s clear that he’s loyal to those he cares about and doesn’t want to see any harm come to them. Meanwhile, on the flip side, this also gives us the chance to see how much Luna has come to rely on Rintarou being there – despite the short time they’ve been together.

Just like King Arthur and Merlin before them, Rintarou and Luna are both stubborn. While Rintarou has no intention of leaving Luna’s side, he’s also unlikely to admit this to her anytime soon. In the meantime, Luna winds herself up and grows frustrated but underneath it all, she’s confident Rintarou will make the right choice. Their back-and-forth bickering is just as entertaining as it was back in Volume 1 and it’s hard not to smile when reading it, since it’s very clear to the readers that these two will remain side by side.

It certainly speaks to the strength of Taro Hitsuji’s writing for the characters’ interactions to remain this fun in the second volume, despite being quite similar to Volume 1. Admittedly it feels a bit strange for Volume 2 to not focus on the succession battle as much, as that’s the whole conceit of the series, but I think the diversion can be forgiven, given how entertaining it winds up being. There are some impressive fight scenes within this volume as well, which helps build on the character drama happening throughout. I think Hitsuji has done a good job of balancing everything and it’s going to be interesting to see where they take the story for Volume 3.

As previously mentioned, this release comes to the West thanks to Yen Press and has been translated by Jan Cash. The translation reads well with no issues to note. Despite a year’s gap between the release of Volume 1 and Volume 2 of the series, Yen currently has Volume 3 scheduled for release in November. Fingers crossed this means that the series is now on a consistently faster schedule!

Overall, Last Round Arthurs Volume 2 is another entertaining read. Although the author has briefly stepped away from the main plot, the story and concept behind the series are still great fun. If you enjoyed Volume 1, then you’ll certainly have no complaints this time either! 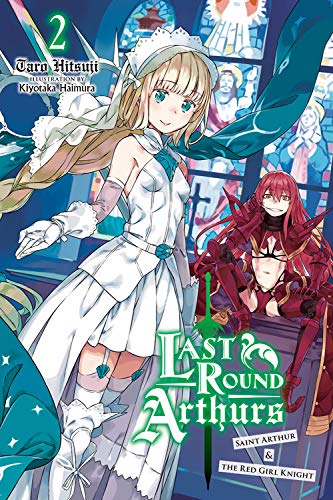 Overall, Last Round Arthurs delivers a satisfying fantasy adventure. The legend of King Arthur and Merlin may be quite different with Luna and Rintaro at the helm, but one thing’s for sure – it’ll be a crazy ride. Those of you looking for a new sword and sorcery adventure will love what this light novel has to offer.

In the third volume of Last Round Arthurs Luna, Rintarou and friends enjoy a peaceful barbecue before being attacked by a new King! This one is obsessed with justice and has his sights set on murdering Luna, so it’s left to Rintarou to find a way of saving the day once more.