With the release of Volume 3 of Last Round Arthurs, we find ourselves halfway through the series already. In the last instalment, things took a bit of a diversion to flesh out Rintarou’s past, but will things get back on track now? Let’s find out!

We reunite with our cast as they’re enjoying a well-earned break after saving transfer student Emma Michelle from certain death in the previous book,. Rintarou has pushed his body to the limits, but when  he’s released from hospital, Luna decides to hold a barbecue to celebrate his recovery.

Unfortunately, the peaceful break doesn’t last for long as the group’s mansion comes under attack from a new King (one of those battling to be crowned King Arthur), known as Hitoshi Kataoka. This King is driven by his obsession with justice and wants nothing more than to kill Luna and when Rintarou is unable to wield his powers, Luna finds herself at death’s door. Now it’s a race against time to put a stop to Hitoshi and save Luna. Can Rintarou reawaken his powers and save the day?

This fight marks a return to the battle for succession that the series started with, which I’m pleased about. However, I think Volume 3 misses the mark by almost immediately writing out Luna. Sure, she’s present for all of the party at the beginning of the book, but she doesn’t last long in the fight against Hitoshi, which is a shame when she’s supposed to be one of the main characters.

The other problem is that we spent a lot of Volume 2 diving into Rintarou’s past, what drives him and his desires. I don’t feel like that needed to happen again a single volume later. While it’s fair to say that Rintarou has a lot to work through, especially as he remembers more of his past life as Merlin living with Arthur, it’s not enough to need to be the focus of this volume.

Perhaps what’s most frustrating is that author Taro Hitsuji has a great idea to build on and, for as much as the series keeps spinning its wheels, I am very attached to the characters. The relationship between Rintarou and Luna is fun to watch play out and the dialogue between them is witty and well written. It’s just a shame that the story surrounding them has gotten away from itself so much.

With only two books left to go, it’s clear that this series probably won’t have a satisfying conclusion. I’ve made my peace with that and I just want to see what the future has in store for Luna and Rintarou. It’s disappointing, but the cast is likeable enough where I’m willing to put that aside. Even Hitoshi, the villain this time around, has his reasons for why he wants to kill Luna and these are certainly compelling enough to keep you turning the pages.

Ultimately what we’re left with is the reality that Last Round Arthurs is only going to be enjoyable if you’ve found yourself particularly invested in the cast. Even if Hitsuji manages to shift the spotlight back onto Luna and focuses on getting her to become king, it’s a little too late to successfully turn things around due to the muddled storytelling so far.

Last Round Arthurs Volume 3 comes to the West thanks to Yen Press and continues to be translated by Jan Cash. The translation reads well with no issues to note. Volume 4 of the series is currently scheduled for release in March.

Overall, the third volume of Last Round Arthurs has its fair share of problems. Depending on why you like the series, these could be overlooked, but otherwise, I think this is the point where a lot of readers will bid the books goodbye. 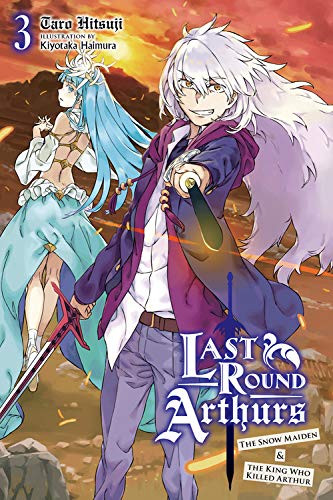 Overall, Last Round Arthurs delivers a satisfying fantasy adventure. The legend of King Arthur and Merlin may be quite different with Luna and Rintaro at the helm, but one thing’s for sure – it’ll be a crazy ride. Those of you looking for a new sword and sorcery adventure will love what this light novel has to offer.

After a whole year between volumes, Last Round Arthurs returns with the release of Volume 2. With Luna eyeing up an expensive mansion (which she’ll spend Rintarou’s hard earned cash on!) and a old friend of Rintarou’s transferring into school, things are about to change drastically for the duo…